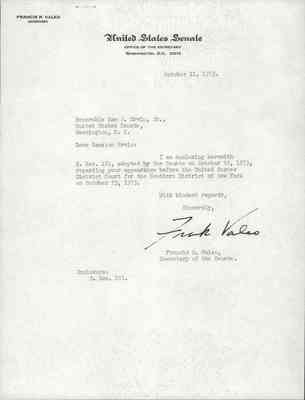 I am enclosing herewith S. Res. 181, adopted by the Senate on October 10, 1973, regarding your appearance before the United States District Court for the Southern District of New York on October 23, 1973. 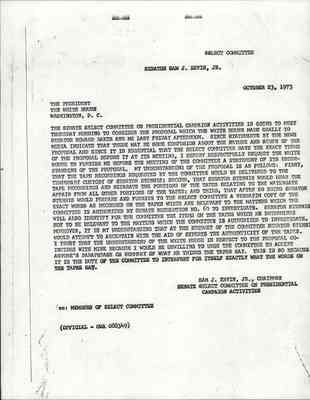 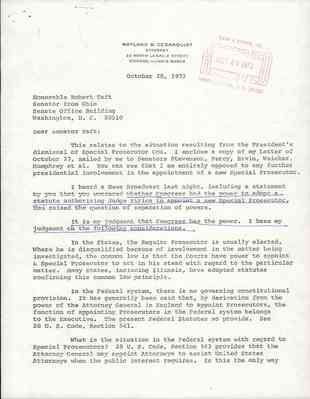 This relates to the situation resulting from the President's dismissal of Special Prosecutor Cox. I enclose a copy of my Letter of October 27, mailed by me to Senators Stevenson, Percy, Ervin, Weicker, Humphrey et al. You can see that I am entirely opposed to any further presidential involvement in the appointment of a new Special Prosecutor.

I heard a News Broadcast last night, including a statement by you that you wondered whether Congress had the power to adopt a statute authorizing Judge Sirica to appoint a new Special Prosecutor. You raised the question of seperation of powers.

In the States, the Regular Prosecutor is usually elected. Where he is disqualified becasue of involvement in the matter being investigated, the common law is that the Courts have power to appoint a Special Prosecutor to act in his stead with regard to the particular matter. Many States, including Illinois, have adopted statutes confirming this common law principle.

In the Federal system, there is no governing constitutional provision. It has generally been said that, by derivation from the power of the Attorney General in England to appoint Prosecutors, the function of appointing Prosecutors in the Federal system belongs to the Executive. The present Federal Statutes so provide. See 28 U. S. Code, Section 541.

What is the situation in the Federal system with regard to Special Prosecutors? 28 U. S. Code, Section 543 provides that the Attorney General may appoint Attorneys to assist United States Attorneys when the public interest requires. Is this the only way 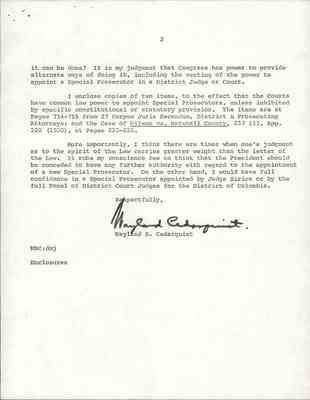 it can be done? It is my judgement that Congress has power to provide alternate ways of doing it, including the vesting of the power to appoint a Special Prosecutor in a District Judge or Court.

I enclose copies of two items, to the effect that the Courts have common law power to appoint Special Prosecutors, unles inhibited by specific constitutional or statutory provision. The items are at Pages 714-715 from 27 Corpus Juris Secundum, District & Prosecuting Attorneys; and the Case of Wilson vs. Marshall County, 257 Ill. App. 220 (1930), at Pages 225-226.

More importantly, I think there are times when one's judgement as to the spirit of the Law carries greater weight than the letter of the Law. It rubs my conscience raw to think that the President should be conceded to have any further authority with regard to the appointment of a new Special Prosecutor. On the other hand, I would have full confidence in a Special Prosecutor appointed by Judge Sirica or by the full Panel of District Court Judges for the District of Columbia. 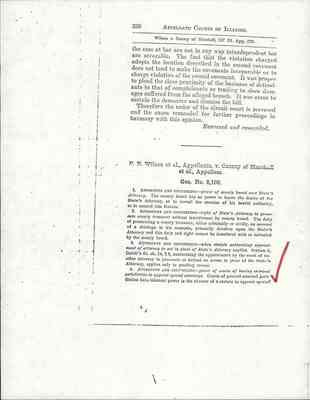 the case at bar are not in any way interdependent but are severable. The fact that the violation charged adopts the location described in the second covenant does not tend to make the covenants inseperable or to charge violation of the second covenant. It was proper to plead the close proximity of the business of defendants to that of complainants as tending to show damages suffered from the alleged breach. It was error to sustain the demurrer and dismiss the bill.

Therefore the order of the circuit court is reversed and the cause remanded for further proceedings in harmony with this opinion.

2. ATTORNEYS AND COUNSELORS -- right of State's Attorney to prosecute county treasurer without interference by county board. The duty of prosecuting a county treasurer, either criminially of civilly, on account of a shortage in his accounts, primarily devolves upon the State's Attorney and this duty and right cannot be interfered with or curtailed by the county board.