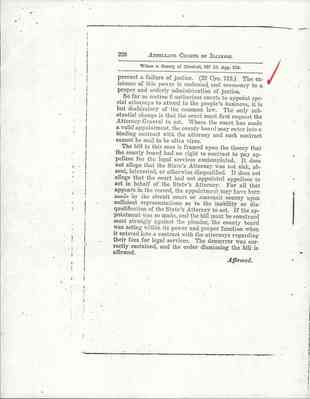 prevent a failure of justice. (32 Cyc. 719.) The existence of this power is undenied and necessary to a proper and orderly administration of justice.

So far as section 6 authorizes courts to appoint specual attorneys to attend to the people's business, it is but declaratory of the common law. The only substantial change is that the court must first request the Attorney-General to act. Where the court has made a valid appointment, the county board may enter into a binding contract with the attorney and such contract cannot be said to be utlra vires.

The bill in this case is framed upon the theory that the county board had no right to contract to pay appellees for the legal services contemplated. It does not allege that the State's Attorney was not sick, absent, interested, or otherwise disqualified. It does not allege that the court had not appointed appellees to act in behalf of the State's Attorney. For all that appears in the record, the appointment may have been made by the circuit court of Marshall county upon sufficient representations as to the inability or disqualification of the State's Attorney to act. If the appointment was so made, and the bill must be construed most strongly against the pleader, the county board was acting within its power and proper function when it entered into a contract with the attorneys regarding their fees for legal services. The demurrer was correctly sustained, and the order dismissing the bill is affirmed. 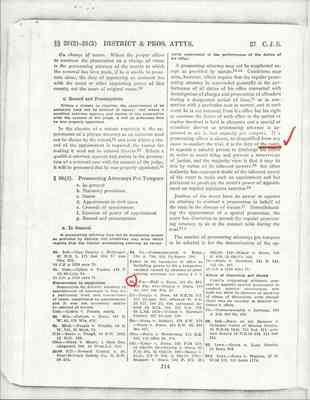 Unless a statute so requires, the appointment of an assistant need not be entered of record; and where a qualified attorney appears and assists in the prosecution with the consent of the judge, it will be presumed that he was properly appointed.

In the absence of a statute requiring it, the appointment of a private attorney as an assistant need not be shown by the record,31 and even where a record of the appointment is required, the reason for making it need not be entered therein.32 Where a qualified attorney appears and assists in the prosecution of a criminal case with the consent of the judge, it will be presumed that he was properly appointed.33

A prosecuting attorney may not be supplanted except as provided by statute. 33.50 Conditions may arise, however, which require that the regular prosecuting attorney be superseded generally in the performance of all duties of his office connected with investigation of charges and prosecution of offenders during a designated period of time,34 or in connection with a particular case or matter, and in such even he is not removed from his office, but his right to exercise the duties of such office in the period or substitute district or prosecuting attorney is appointed to act in that capacity pro tempore. If a prosecuting officer absent, or disqualified form any cause to conduct the trial, it is the duty of the court, ot appoint a suitable person to discharge his duties in order to avoid delay and prevent a miscarriage of justice, and the majority view is that it may do this by vitrue of its inherent powers;35 but other authority has expressed doubt of the inherent power of the ocurt to make such an appointment and has preferred to predicate the court's power of appointment on implied legislative sanction.36

Justices of the peace have not power to appoint an attorney to conduct a prosecution in behalf of the state in the absence of statute.37 Notwithstanding the appointment of a special prosecutor, the court has discretion to permit the regular prosecuting attorney to sit at the counsel table during the trial.37,5

Concurrence in suggestion Suggestion by district attorney of appointment of assistant to him for a particular trial, and concurrence of court, constituted an appointment, and it was not necessary matter be entered of record. Colo. - Cohen v. People, supra.

Abuse of discretion not shown Court's requested attorney general to appoint special prosecutor to conduct murder prosecution was held not in error in absence of showing of abuse of discretion, even though there was no vacancy in district attorney's office 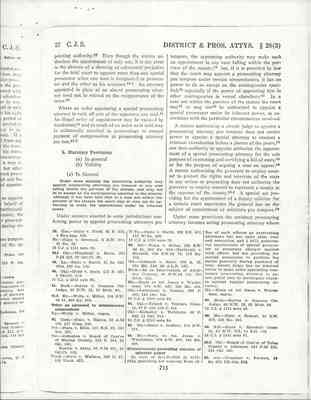 pointing authority.38 Even thought the statute authorizes the appointment of only one, it is not error in the absence of a showing of substantial prejudice for the trial court to appoint more than one special prosecutor when one man is designated as prosecutor attorney need not be retired on the reappearance of the latter.39

Where an order appointing a special prosecuting attorney is void, all acts of the appointee are void.40 An illegal order of appointment may be vacated by mandamus,41 and so much of an order as is void may be collaterally attacked in proceedings to compel payment of compensation as prosecuting attorney pro tem.41.5

b. Statutory Provisions (a) In general (b) Validity

(a) In General Under some statutes the appointing authority may appoint prosecuting attorneys pro tempore in any case failing within the purview of the statute, and may not do so except on the contingencies specified in the statute, although it has been held that in a case not within the purview of the statute the court may or may not be authorized to make the appointment under its inherent power.

Under statutes enacted in some jurisdictions conferring power to appoint prosecuting attorney pro tempore, the appointing authority may make such an appointment in any case failing within the purview of the statute;42 but, if it is provided by law that the court may appoint a prosecuting attorney pro tempore under certain circumstances, it has not power to do so except on the contingencies specified,43 especially if the power of appointing him in other contingencies is vested elsewhere.44 In a case not within the purview of the statute the court may45 or may not46 be authorized to appoint a special prosecutor under its inherent power, in accordance with the particular circumstances involved.

A statute authorizing a circuit judge to appoint a prosecuting attorney pro tempore does not confer power to appoint a special attorney to conduct a criminal examination before a justice of the peace,47 nor does authority to appoint authorize the appointment of a special prosecuting attorney for the sole purpose of examining and certifying a bill of costs,48 or for the pirpose of arguing a case on appeal.49 A statute authorizing the governor to employ counsel to protect the rights and interests of the state in any action or proceeding does not authorize the governor to employ counsel to represent a conuty at the expense of the county.49.5 A special act providing for the appointment of a deouty solicitor for a certain court supersedes the general law on the subject of appointment of solicitors pro tempore.50 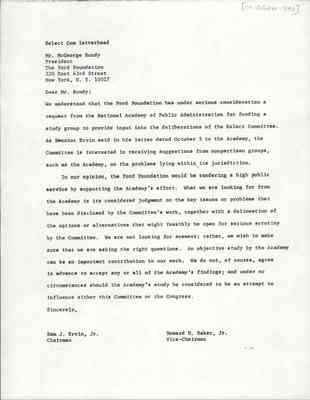 We understand that the Ford Foundation has under serious consideration a request from the National Academy of Public Administration for funding a study group to provide input into the deliberations of the Select Committee. As Senator Ervin said in his letter dated October 5 to the Academy, the Committee is interested in recieving suggestions from nonpartisan groups, such as the Academy, on the problems lying within its jurisdiction.

In our opinion, the Ford Foundation would be rendering a high public service by supporting the Academy's effort. What we are looking for from the Academy is its considered judgement on the key issues or problems that have been disclosed by the Committee's work, together with a delineation of the options or alternatives that might feasibly be open for serious scrutiny by the Committee. We are not looking for answers; rather, we wish to make sure that we are asking the right questions. An objective study by the Academy can be an important contribution to our work. We do not, of course, agree in advance to accept any or all of the Academy's findings; and under no circumstances should the Academy's study be considered to be an attempt ot influence either this Committee or the Congress. 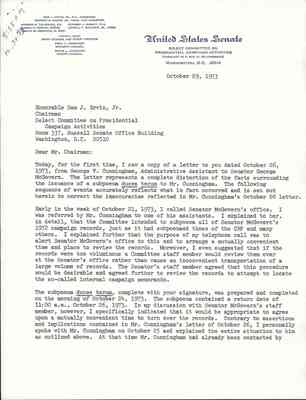 Today, for the first time, I saw a copy of a letter to you dated October 26, 1973, from George V. Cunningham, Administrative Assistant to Senator George McGovern. The letter represents a complete distortion of the facts surrounding the issuance of a subpoena duces tecum to Mr. Cunningham. The following sequence of events accurately reflects what in fact occurred and is set out herein to correct the inaccuracies reflected in Mr. Cunningham's October 26 letter.

Early in the week of October 21, 1973, I called Senator McGovern's office. I was referred by Mr. Cunningham to one of his assistants. I explained to her, in detail, that the Committee intended to subpoena all of Senator McGovern's 1972 campaign records, just as it. had subpoenaed those of the CRP and may others. I explained further that the purpose of my telephone call was to alert Senator McGovern's office to this and to arrange a mutually convenient time and place to review the records. Moreover, I even suggested that if the records were too voluminous a Committee staff member would review them over at the Senator's office rather than cause an inconvenient transportation of a large volume of records. The Senator's staff member agreed that this procedure would be desirable and agreed further to review the records to attempt to locate the so-called internal campaign memoranda.

The subpoena duces tecum, complete with your signature, was prepared and completed on the morning of October 24, 1973. The subpoena contained a return date of 11:00 a.m., October 26, 1973. In my discussion with Senator McGovern's staff member, however, I specifically indicated that it would be appropriate to agree upon a mutually convenient time to turn over the records. Contrary to assertions and implications contained in Mr. Cunningham's letter of October 26, I personally spoke with Mr. Cunningham on October 25 and explained the entire situation to him as outlined above. At that time Mr. Cunningham had already been contacted by