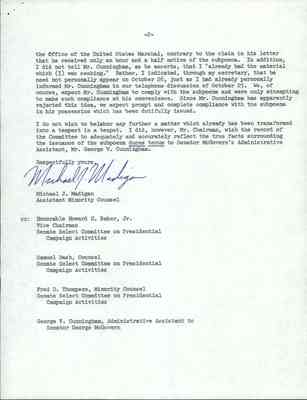 the Office of the United States Marshal, contrary to the claim in his letter that he recieved only an hour and a half notice of the subpoena. In addition, I did not tell Mr. Cunningham, as he asserts, that I "already had the material which (I) was seeking." Rather, I indicated, through my secretary, that he need not personally appear on October 26, just as I had already personally informed Mr. Cunningham in our telephone discussion of October 25. We, of course, expect Mr. Cunningham to comply with the subpoena and were only attempting to make such compliance at his convenience. Since Mr. Cunningham has apparently rejected this idea, we expect prompt and complete compliance with the subpoena in his possession which has been dutifully issued.

I do not wish to belabor any further a matter which already has been transformed into a tempest in a teapot. I did, however, Mr. Chairman, wish the record of the Committee to adequately and accurately refelct the true facts surrounding the issuance of the subpoena duces tecum to Senator McGovern's Administrative Assistant, Mr. George V. Cunningham. 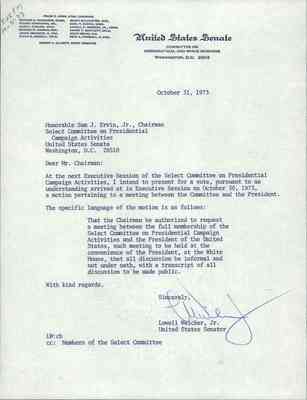 The specific language of the motion is as follows:

That the Chairman be authorized to request a meeting between the full membership of the Select Committee on Presidential Campaign Activities and the President of the United States, such meeting to be held at the convience of the President, at the White House, that all discussion be informal and not under oath, with a transcript of all discussion to be made public. 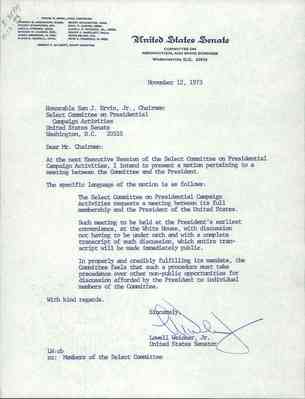 At the next Executive Session of the Select Committee on Presidential Campaign Activities, I intend to present a motion pertaining to a meeting between the Committee and the President.

The specific language of the motion is as follows:

The Select Committee on Presidential Campaign Activities requests a meeting beween its full membership and the President of the United States.

Such meeting to be held at the President's earliest convenience, at the White House, with discussion not having to be under oath and with a complete transcript of such discussion, which entire transcript will be made immediately public.

In properly and credibly fulfilling its mandate, the Committee feels that such a procedure must take precedence over other non-public opportunities for discussion afforded by the President to individual members of the Committee. 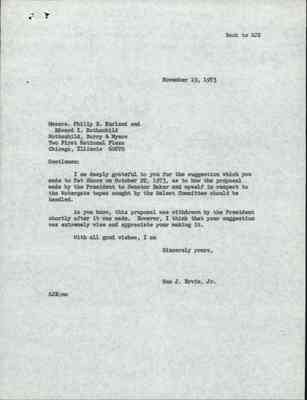 I am deeply grateful to you for the suggestion which you made to Pat Shore on October 22, 1973, as to how the proposal made by the President to Senator Baker and myself in respect to the Watergate tapes sought by the Select Committee should be handled.

As you know, this proposal was withdrawn by the President shortly after it was made. However, I think that your suggestion was extremely wise and appreciate your making it.

With all good wishes, I am 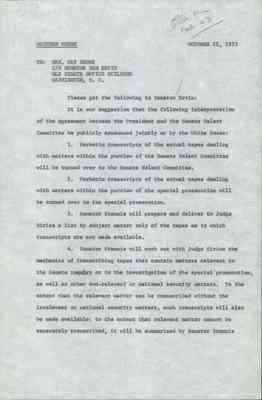 Please get the following to Senator Ervin:

It is out suggestion that the following interpretation of the agreement between the President and the Senate Select Committee be publicly announced jointly or by the White House:

3. Senator Stennis will prepare and deliver to Judge Sirica a list by subject matter only of the tapes as to which transcripts are not made available.

4. Senator Stennis will work out with Judge Sirica the mechanics of transcribing tapes that contain matters relevant to the Senate inquiry or to the investigation of the special prosecution as well as other non-relevant or national security matters. To the extent that the relevant matter can be transcribed without the irrelevant or national security matters, such transcripts will also be made available; to the extent that relevant matter cannot be separately transcribed, it will be summarized by Senator Stennis