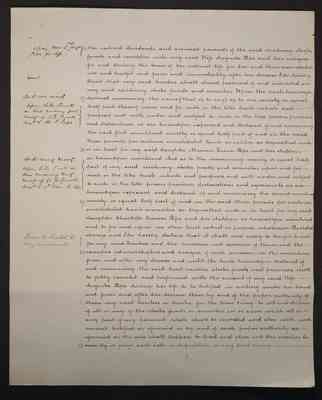 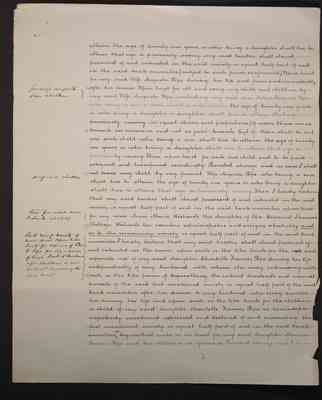 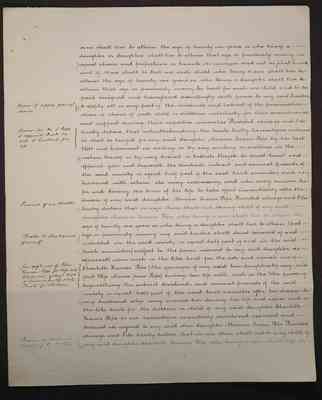 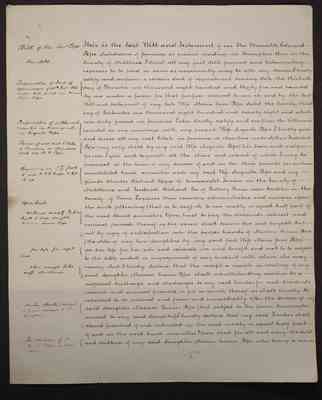 Will of Vnr. Edwd Pope

Confirmation of settlement executed on marriage with wife Augusta Pope

Devise of all real Estate in Jamaica or elsewhere unto son A. [N?] Pope

for life for sepe. use & her receipt to be suff discharge

on her death [subject to power reserved to or daughter]

For children of sd M.S. Pope in equal shares 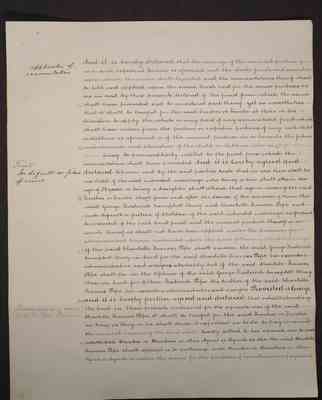 And it is hereby declared that the savings of the annual produce of each such expectant portion as aforesaid and the stocks funds and securities upon which the same shall invested and the accumulations thereof shall be held and applied upon the same trusts and for the same purposes as are in and by these presents declared of the fund from which the same shall have proceeded and be considered part thereof yet so nevertheless that it shall be lawful for the said Trustees or Trustee at their or his discretion to apply the whole or any part of any accumulated fund which shall have arisen from the portion or respective portions of any such child or children as aforesaid or of the annual produce in or towards the future maintenance and education of the child or children who shall for the time being be presumptively entitled to the fund from which the accumulation shall have proceeded And it is hereby agreed and declared between and by the said parties hereto that in case there shall be no child of the said intended marriage who being a son shall attain the age of 21 years or being a daughter shall attain that age or marry the said Trustees or Trustee shall from and after the decease of the survivor of them the said George Frederick Campbell Bray and Charlotte Frances Pope and such default or failure of Children of the said intended marriage as aforesaid be possessed of the said trust fund and the annual produce thereof or so much thereof as shall not have been applied under the provision for advancement herein contained upon the trusts following (that is to say) if the said Charlotte Frances Pope shall survive the said George Frederick Campbell Bray in trust for the said Charlotte Frances Pope her executors administrators and assigns absolutely but if the said Charlotte Frances Pope shall die in the lifetime of the said George Frederick Campbell Bray then in trust for Arthur Frederick Pope the brother of the said Charlotte Frances Pope his executors administrators and assigns Provided always and it is hereby further agreed and declared that notwithstanding the trust in these presents contained for the separate use of the said Charlotte Frances Pope it shall be lawful for the said Trustees or Trustee so long as they or he shall deem it expedient so to do to pay or remit the annual income of the trust estate hereby settled to her separate use to such established Banker or Bankers or other Agent or Agents as she the said Charlotte Frances Pope shall appoint or to authorize such Banker or Bankers or other Agent or Agents to receive the same for the purposes of remittance or payment 6.

Trusts In default or failure of [child?] 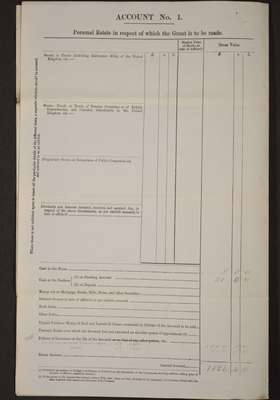 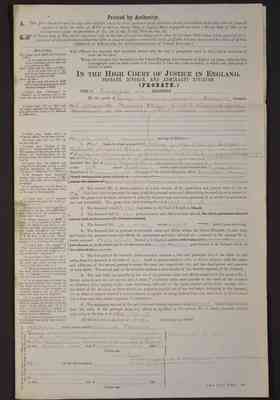 Printed by Authority. A. This form should be used in ALL cases EXCEPT when the whole personal estate wherever situate and without debts or funeral expenses is under the value of £100 so that no Stamp Duty or Legacy Duty is payable OR when a Stamp duty of 30s. is to be impressed under the provisions of Sec. 33 of the Act 44 Victoria cap. 12. A Stamp duty of 30s. can be impressed only in the case of a person dying on or after the 1st June 1881 whose whole personal estate wherever situate and without deducting debts or funeral expenses exceeds the value of £100, but does not exceed the value of £300. 9Sffidavit or Affirmation for the Commussioners of Inland Revenue.) N.B.- Where the deceased died domiciled abroad, only the first 3 paragraphs need be used, and no deduction of debts can be taken. Where the deceased died domiciled in the United Kingdom, but deduction of debts is not taken, only the fit 5 paragraphs need be used, unless it is intended to have the grant re-sealed, in which case paragraph 6 should be added. IN THE HIGH COURT OF JUSTICE IN ENGLAND. PROBATE DIVORCE AND ADMIRALTY DIVISION. The Principal - Registry IN the goods of George Frederick Campbell Bray deceased. I Charlotte Frances Bray of No. 16 Kidbrook Grove. Blackheath in the county of Kent widow--- Make oath-- and say as follows: - 1. desire to obtain a grant of Probate of the Will of George Frederick Campbell Bray formerly --- of Tring in the county of Hertford a Colonel under Majestys Army and late of No 16 Kidbrook Grove Blackheath aforesaid a Major General in the said Army. deceased who died at No. 16 Kidbrook Grove Blackheath aforesaid ---- on the 26th day of September one thousand eight hundred and eighty four domiciled in --- that part of the United Kingdom called England ------ ------ 2. The account No. 1, hereto annexed, is a true account of the particulars and present value so far as I have been able to ascertain the same of all the personal estate and effects of the deceased, for or in respect of which the grant is to be made, exclusive of what the deceased may have been possessed of or entitled to as a trustee and not beneficially. The gross value thereof altogether is £1793:14:0. 3. The deceased owned no real estate in the United Kingdom 4. The deceased had no personal estate and effects situate abroad ---- 5. The deceased left a --- widow eight--- lawful usse surviving. 6. The deceased had no personal or moveable estate and effects within the United Kingdom other than and besides the personal estate and effects, the particulars and value whereof are contained in the account No. 1, hereto annexed. The whole there of is in England ----- ----- ---- 7. The first part of the schedule hereto annexed contains a true and particular list of the debts due and owing from the deceased at the time of his death to persons resident within the United Kingdom with the names and addresses of the several persons to whom the same are respectively due, and the descriptions and maounts of such debts. The second part of the schedule contains a true account of the funeral expenses of the deceased. 8. The said debts are payable by law out of the personal estate and effects comprised i nthe account No. 1, hereto annexed, and are not nor are any of them voluntary debts made payable on the death of the deceased or voluntary debts payable under some intrument delievered to the donee thereof within three months before the death of the deceased, or debts which are primarily payable out of any real estate belonging to the deceased, or debts in respect whereof a reimbursement is capable of being claimed from any real estate of the decased or from any other estate or person whatsoever. 9. The aggregate amount of the said debts and funeral expenses is £632:14:5, which being deducted from the value of the personal estate and effects as specified in the account No. 1, hereto annexed, reduces such value to the sum of £1160:19:7. All which is true to the best of my knowledge and belief. Sworn by the above-named Charlotte Francis Bray --------- ------- at No. 16 Kidbrook Grove Blackheath in the county of Kent on the seventh -- say of October 1884. Before me A.W. Vaisey a Commissioner to administer oaths in the Supreme Court of Judicature in England. 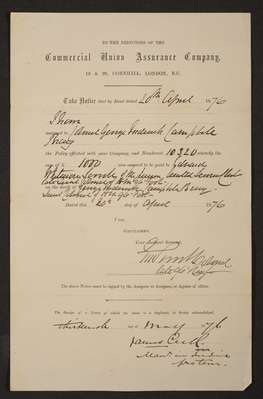 To the Directors of The Commercial Union Assurance Company, 19 & 20, Cornhill, London, E.C. Take Notice that by Deed dated 20th April 1876 [I have?] assigned to Colonel George Frederick Campbell Bray the Policy effect with your Company, and Numbered 10320 whereby the sum of £1000 was assured to be paid to Edward Whitman Scruby of the [paymt?][accounted?] Service Clerk late [Lieut?] Colonel H M 96 Foot on the death of George Frderick Campbell Bray Lieut Colonel of H M 96 Foot Dated this 20th day of April 1876 I am, Gentlemen, Your obedient Servant, [signature?] The above Notice must be signed by the Assignor or Assignee, or Agents of either.

The receipt of a notice of which the above is a duplicate, is herby acknowledged, thirteenth day of May 1876 James [?] Manr in India protem 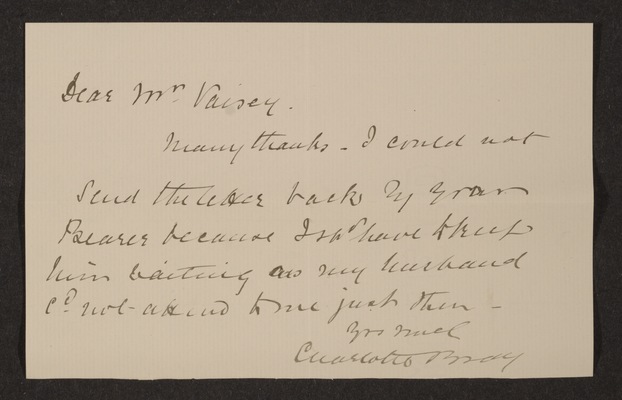 Many thanks. I could not send the letter back by your Bearer because I wd have to keep him waiting as my husband cd not attend to me just then