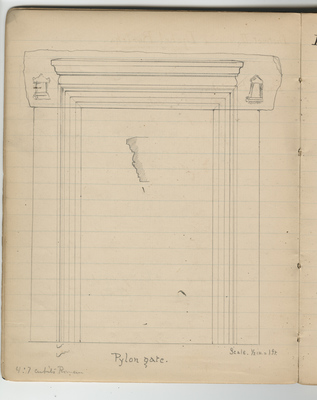 Last edit 15 days ago by poorhorse 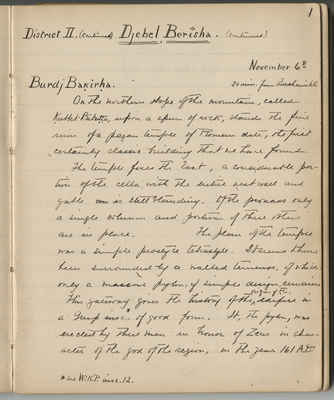 On the northern slope of the mountain, called Kublet-Babutta, upon a spur of rock, stands the fine ruin of a pagan temple of Roman date, the first certainly classic building that we have found.

The temple faces the East, a considerable portion of the cella with the entire west wall and gable is still standing. Of the pronaos only a single column and portions of three others are in place. The plan of the temple was a simple prostyle tetrastyle. It seems [to?] have been surrounded by a walled temenos, of which only a massive pylon, of simple design remains.

This gateway gives the history of the origin of the edifice in a Greek insc.* of good form. It, the pylon, was erected by three men in honor of Zeus in character of the god of the region, in the year 161 A.D. 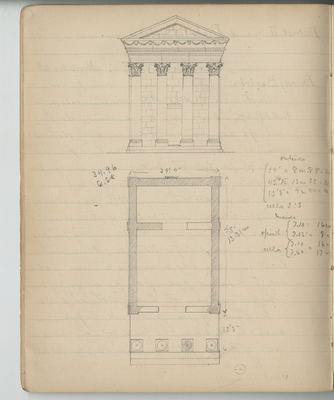 Last edit 4 months ago by katyknortz 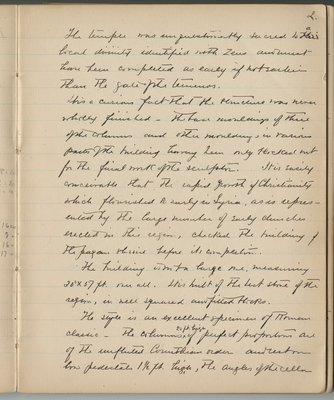 The temple was unquestionably sacred to a local divinity identified with Zeus and must have been completed as early if not earlier than the gate of the temenos.

It is a curious fact that the structure was never wholely finished - the base mouldings of three of the columns and other mouldings in various parts of the building having been only hacked out for the final work of the sculptor. It is easily conceivable that the rapid growth of Christianity which flourished so early in Syria, as is represented by the large number of early churches erected in this region, checked the building of the pagan shrine before its completion.

The building is not? a large one, measuring 20x57 ft. over all. It is built of the best stone of the region, in well squared and fitted blocks.

The style is an excellent specimen of Roman classic - the columns 20 ft high of perfect proportions are of the unfluted Corinthian order and rest on low pedestals 1 1/2 ft. hight, the angles of the cella

Last edit 4 months ago by katyknortz 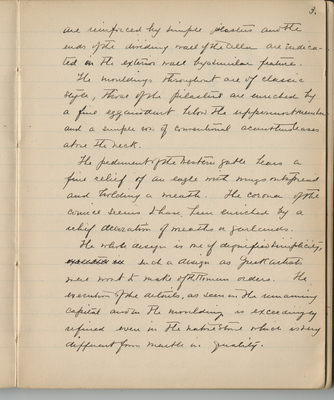 3. are reinforced by simple pilasters and the ends of the dividing wall of the cella are indicaed on the exterior wall by a similar feature.

The mouldings throughout are of classic style, those of the pilasters are encircled by a fine egg and dart below the uppermost member - and a simple row of conventional acanthus leaves above the neck.

The pediment of the Western gable bears a fine relief of an eagle with wings outspread and holding a wreath. The corner of the cornice seems to have been enriched by a relief decoration of wreaths or garlands.

The whole design is one of dignified simplicity, such a design as Greek artists were wont to make of the Roman orders. The execution of the artists, as seen in the remaining capital and on the moulding, is exceedingly refined even in the ?stone which is very different from marble in quality.