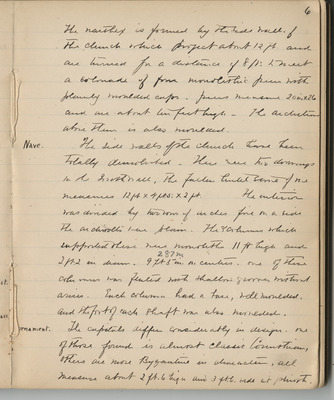 6 The narthex is formed by the side walls of the church which project about 12ft and are turned for a distance of 8ft to meet a colonade of four monolithic piers with plainly moulded caps. Piers measure 20 in x 26 and are about ten feet high. The architrave above them is also moulded.

The side walls of the church have been totally demolished. There were two doorways in the south wall, the fallen lintel stone of one measures 12 ft x 4 ft 5 x 2 ft. The interior was divided by two rows of arches five on a side. The archivolts were plain. The 8 columns which supported these were monoliths 11 ft high and 2 ft 2 in diam. 9 ft 5 in on centres. One of these columns was fluted with shallow grooves without arrises. Each column had a base, well moulded, and the foor of each shaft was also moulded.

The capitals differ considerably in design. One of those found is almost classic Corinthian, others are more Byzantine in character; all measure about 2 ft 6 high and 3 ft 6 wide at plinth. 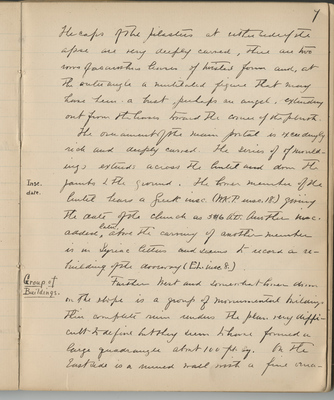 7 The caps of the pilasters at either side of the apse are very deeply carved, there are two rows of acanthus leaves of twisted form and, at the outer angle a multiheaded figure that may have been a bust, perhaps an angel, extending out from the bases towards the corner of the plinth.

The ornament of the main portal is exceedingly rich and deeply carved. The series of mouldings extends across the lintel and down the jambs to the ground. The lower member of the lintel bears a Greek insc. (W.K.P. insc. 18) giving the date of the church as 346 A.D. Another insc. added later, above the carving of another member is in Syriac letters and seems to record a rebuilding of the doorway (E.L. insc.8).

Further west and somewhat lower down on the slope is a group of monumental buildings. This complete ruin renders the plan very difficult to define but they seem to have formed a large quadrangle almost 100 ft. sq. On the East side is a ruined? wall with a fine orna- 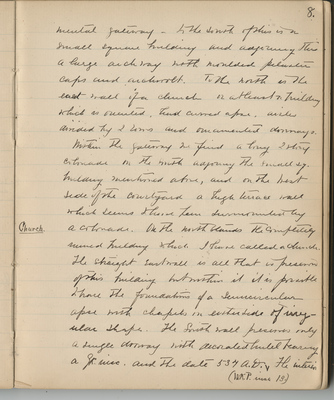 8 mental gateway. To the south of this is a small square building and adjoining this a large archway with moulded pilaster caps and archivolt. To the north is the east wall of a church or at least a building which is oriented, hand carved apse, aisles divided by 2 rows and ornamented doorways. Within the gateway we find a long 2 story colonade on the south adjoining the small sq. building mentioned above, and on the west side of the courtyard a high terrace wall which seems to have been surrounded by a colonade.

On the north stands the completely ruined building which I have called a church. The straight east wall is all that is preserved of this building but within it it is possible to trace the foundations of a semicircular apse with chapels on either side of irregular shape. The south wall preserves only a single doorway with decorated lintel bearing a GR. insc. and the date 537 A.D.^ (W.K.P. insc. 13). The interior 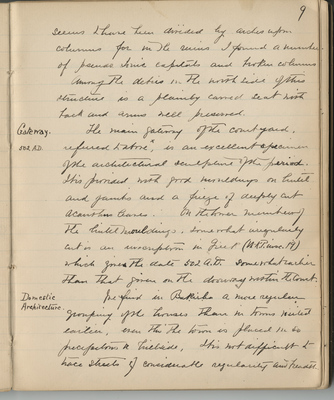 9 seems to have been divided by arches upon columns for in the ruins I found a number of pseudo-Ionic capitals and broken columns.

Among the debris in the north side of this structure is a plainly carved seat with back and arms well preserved. Gateway

The main gateway of the courtyard, refered to above,* is an excellent specimen of the architectural sculpture of the period. This [?] with good mouldings on lintel and jambs and a frieze of deeply cut acanthus leaves. On the lower mechanism? of the lintel mouldings, somewhat irregularly cut is an ?? in first? (N.R.Piuse. 19?) which gives the date 502 A.D. Somewhat earlier than that given on the doorway west in the ?.

The find in Burkisha a more regular grouping of the houses than in ? ? earlier, even tho' the ? is placed ? so ? ? ?, tho' not efficient l? sheets of 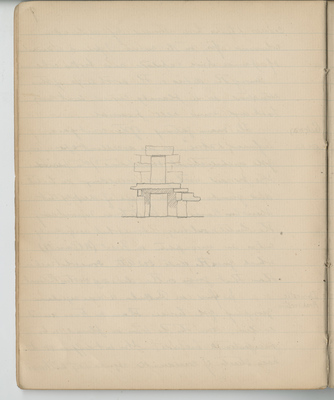