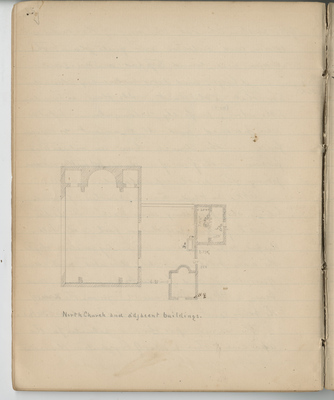 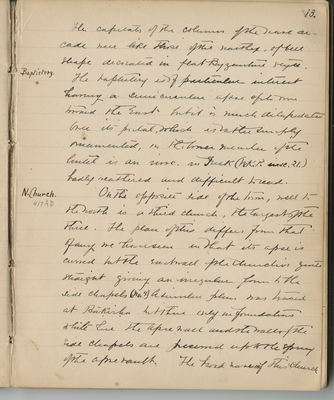 13 The capitals of the columns of the nave arcade were like those of the narthex, of bell shape decorated in ? Byzantine style. Baptistry. The baptistry is of particular interest having a semi circular apse of its own ? the East but it is much dilapidated Over its portal, which is rather simply ornamented, in the ? of the lintel is an insc. in Greek (WKP insc. 21) badly weathered and difficult to read. N. Church 417 AD. On the opposite side of the town, well to the north is a third church, the largest of the three. The plan of this differs from that of any we have seen in that its apse is curved but the east wall of the church is quite straight giving an irregular form to the side chapels (no. 4) a similar plan. traced? at Bakirha but here only the foundations ? the apse wall used the walls of the side chapels are preserved up to the ? of the apse vault. The ? of this church 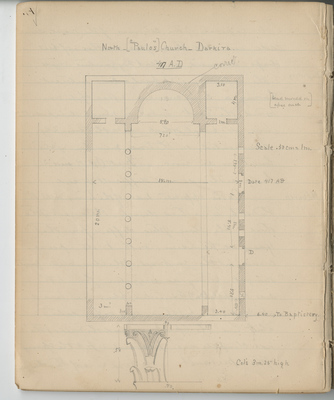 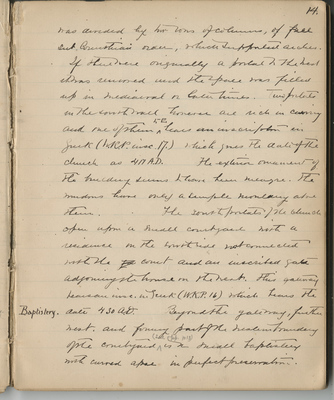 14 was divided by two rows of columns, of full sub Corinthian order, which supported arches. If these were originally a portal to the west it was reused and the space was filled up in medieval or later times. Two portals in the sourth wall however are rich in carving and one of them (to E.) bears an inscription in Greek (WKP insc. 17) which gives the date of the church as 417 AD. The exterior ornament of the building seems to have been meagre. The ? have only a simple moulding above them. The south portals of the church open upon a small courtyard with a residence on the south side not connected with the court and an inscribed gate adjoining the house on the west. This gateway bears an insc. in Greek (WKP 16) which bears the baptistry date 430 AD. Beyond the gateway, further west, and forming part of the western boundary of the courtyard (see opp., p 13) is a small baptistry with curved apse in perfect presentation. 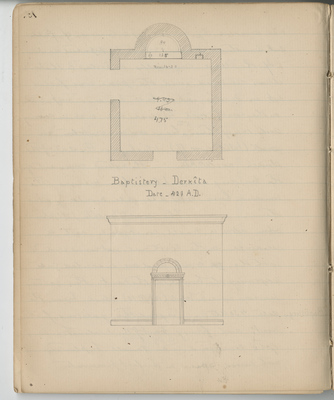