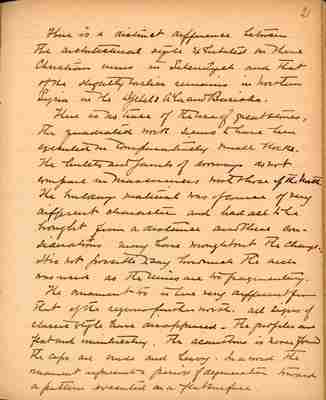 There is a distinct difference beween the architectural style exhibited in these Christian ruins in Selemîyeh and that of the slightly earlier remains in northern Syria in the Djebels A'la and Barisha.

There is no trace of the use of great stones. The quadrated work seems to have been executed in comparatively small blocks. The lintels and jambs of doorways do not compare in massiveness with those of the north. The building material was of course of very different character and had all to be brought from a distance and these considerations may have brought about the change. It is not possible to say how much the arch was used as the ruins are too fragmentary, The ornament too is here very different from that of the region further north. All signs of classic style have disappeared. The profiles are flat and uninteresting. The acanthus is never found. The caps are crude and heavy. In a word the ornament represents a period of degeneration toward a pattern executed on a flat surface.

Last edit 24 days ago by Lrhudgins 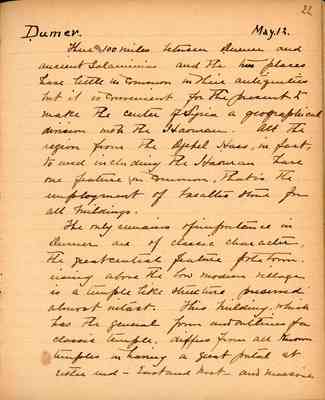 There are 100 miles between Ḍumêr and ancient Salaminius and the two places have little in common in their antiquities but it is convenient for the present to make the center of Syria a geographical division with the Haouran. All the region from the Djebel Hass, in fact, to and including the Haouran have one feature in common. That is the employment of basaltic stone for all buildings.

The only remains of importance in Ḍumêr are of classic character. The great central feature of the town, rising above the low modern village is a temple like structure preserved almost intact. This building, which has the general form and outlines of a classic temple, differs from all known temples in having a great portal at either end - east and west - and massive

Last edit 21 days ago by Lrhudgins 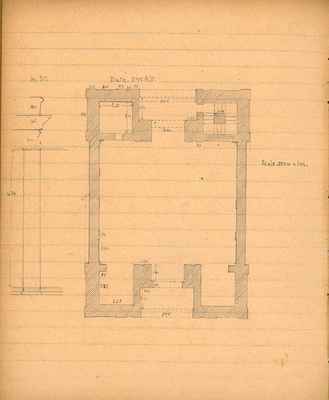 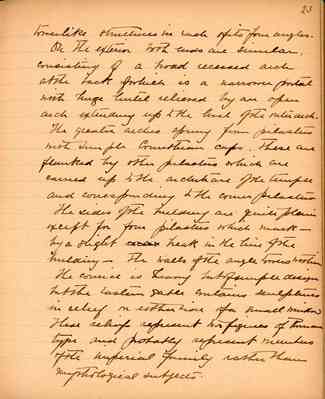 towerlike structures in each of its four angles.

On the exterior both ends are similar, consisting of a broad recessed arch at the back of which is a narrower portal with huge lintel relieved by an open arch extending up to the level of the outer arch.

The greater arches spring from pilasters with simple Corinthian caps. These are flanked by other pilasters which are carried up to the architrave of the temple and corresponding to the corner pilasters. The sides of the building are quite plain except for four pilasters which mark - by a slight break in the line of the building - the walls of the angle towers within. The cornice is heavy but of simple design but the eastern gable contains sculptures in relief on either side of a small window. These reliefs represent two figures of Roman type and probably represent members of the imperial family rather than mythological subjects.

Last edit 21 days ago by Lrhudgins 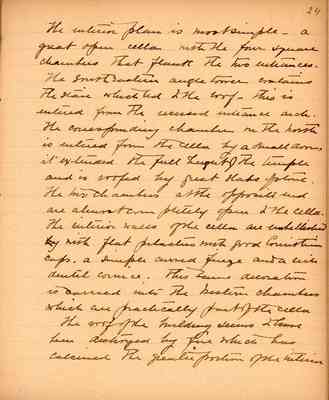 The interior plan is most simple - a great open cella with the four square chambers that flank the two entrances. The southeastern angle tower contains the stair which led to the roof. This is entered from the recessed entrance arch. The corresponding chamber on the horth is entered from the cella by a small door; it extended the full height of the temple and is roofed by great slabs of stone. The two chambers at the opposite end are almost completely open to the cella. The interior walls of the cella are embellished with flat pilaster with good Corinthian caps. A simple curved frieze and a rich cornice. This same decoration is carried into the western chambers which are practically part of the cella. The roof of the building seems to have been destroyed by fire which has calcined the greater portion of the interior.