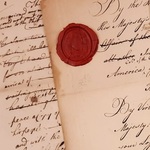 Harmful Language Statement: As you read documents in this collection, you may encounter language that is culturally insensitive or derogatory towards Native Americans. This language is not endorsed by the library, but access to the original materials is provided for the purposes of historical research.

Bill--debts owed by John and Richard Sheppard for the drawing up of leases, bills, and bonds. Includes entry for "drawing a Special Bond from sd. John &amp; Richard to Willm. Appley to pay 10£: A Year to Rebecca Sheppard if she should survive the sd. James her Husband." IEGOR Lot 606.

Speech of the Shawanese and Delawares to "Father" in Detroit; plan to lay siege to Fort Jefferson; request for supplies. True Copy, signed by Thomas Duggan. IEGOR Lot 739.

Numbers of the Narragansett Tribe are increasing, but their land is quickly diminishing. Many young men have been inclined to go to Sea and have perished. IEGOR Lot 638.

Passport for Indians to attend the meeting at Harris Ferry. On same page: Order for Benjamin Ashly to give the Indians one or two batteau that were left at Oshgnagoc last fall by Capt. Wells. IEGOR Lot 605.

Appointment of Thomas McKee as assistant deputy in the Department of Indian Affairs in the Susquehanna, allowing him to "hold Conferences, send Messages, &amp; Treat with the Indians." A note at the bottom states that Alexander McKee was given similar jurisdiction of Ohio and the West. [With...

"Sir William Johnson's answer to the Friendly proposals made by the Stockbridge Indians of assisting the English against their Enemies." Johnson promises to share the proposals with Jeffrey Amherst. Docket: "Entd in Vol 8th Indn Records." IEGOR Lot 618.

"Inteligence received from a principal Cayuga Chief called the Blue Coat." [Intelligence]. Learned from Mr. Wemp, the Americans wish to overtake Oswego. The Indians are unsure of what the King wants them to do, and attempt to remain peaceful. Docket: Received May 6, 1790; Copy sent to...

Intelligence. James Savage, a resident of Spencer Town, 30 miles below Albany, reporting on the strength of troops, provisions, and stores near Fort Defiance. Generals Washington, "McDougold," and Clinton. References an attack by Clinton on a redoubt near Fort Defiance. Colonel Schuyler. IEGOR...