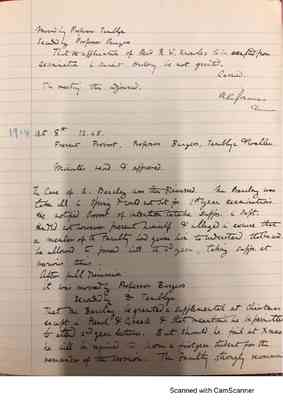 Moved by Professor Tamblyn Seconded by Professor Burgess That the application of Rev. R. W. Knowles to be exempted from examination in Ancient History be not granted. Carried. The meeting was adjourned.l N.C. James Chairman

The case of A. Barclay was then discussed. Mr. Barclay was taken ill in Spring & could not sit for the 1st year examinations. He notified Provost of intention to take supps. in Sept. He did not however present himself & alleged in excuse that a member of the Faculty had given him to understand that he wd. be allowed to proceed the 2nd year, taking supps. at various times After full revision it was moved by Professor Burgess seconded by Dr. Tamblyn That Mr Barclay be granted a supplemental at Christmas except in French & Greek & that meantime he be permitted to attend 2nd year lectures. But should he fail at Xmas he will be required to become a first year student for the remainder of the session. The Faculty strongly recommend[ed] 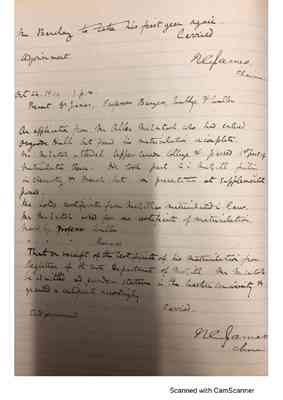 Mr Barclay to take his first year again. Carried Adjournment. N.C. James Chairman Oct. 24, 1904 1 p.m. Present Dr. James, Professors Burgess, Tambly & Wallen An application from Mr. Allen McIntosh who had entered Osgood Hall but found his matriculation incomplete. Mr McIntosh attended Upper Canada College & passed 1st part of Matriculation there. He took part 2 in McGill failing in Chemistry and French, but on presentation at supplemental passed. He holds certificates from McGill as Matriculation in law. Mr McIntosh asked for our certicate of matriculation. Moved by Professor Wallen " " " Burgess That on receipt of this certificate of his matriculaation from Registrar of the Arts Department of McGill Mr McIntosh be admitted and [?] status in the Western University be granted a certificate accordingly Carried Adjournment N.C. James Chairman

Last edit over 1 year ago by Guest User 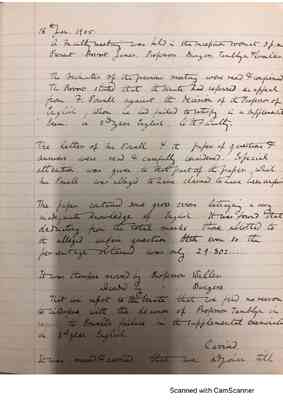 The Minutes of the previous meeting were read & confirmed The Provost stated that the Senate has referred an appeal from F. Powell against the recision of the Professor of English, whom he had failed to satisfy in a supplemental Exam. in 3rd year English, to the Faculty.

The letter of Mr Powell & the paper of questions & answers were read & carefully considered. Especial attention was given to that part of the paper, which Mr Powell was alleged to have claimed to have been unfair

The paper contained some gross errors betraying a very inadequate knowledge of English. It was found that detracting from the total marks those allotted to the alleged unfair question, [?] even so the percentage obtained was only 29.302....

It was therefore moved by Professor Wallen Seconded by " Burgess That we report to the Senate that we find no reason to interfere with the decision of Professor Tamblyn in regard to Powell's failure in the supplemental examinate in 3rd year English. Carried It was moved & carried that we adjourn till 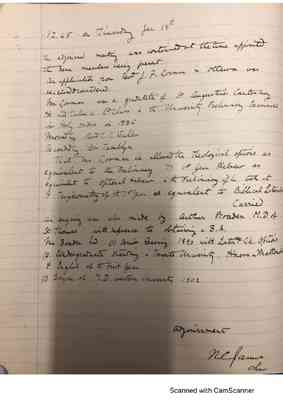 the adjourned meeting was continued at the time appointed the same members being present. An application from Rev. J.F. Gorman in Ottawa was reviewed & considered. Mr. Gorman was a graduate of St. Augustines Canterbury He had taken in 2nd class in the University Preliminary Examination for Holy Orders in 1885 Moved Rev. C.C. Wallen Seconded by Dr. Tamblyn That Mr Gorman be allowed the Theological options as equivalent to the Preliminary & 1st year Hebrew as equivalent to optional Hebrew in the Preliminary if he took it & Trigonometry of the 1st year as equivalent to Biblical Literature Carried An enquiry was also made by Arthur Broaden M.D of St Thomas with reference to obtaining a B.A. Mr. Broaden had (1) Senior leaving 1890 with Later Gk. options (2) Undergraduate starting in Toronto University, Honors In Mathematics & English of th First Year (3) Degree of M. D. Western University 1902 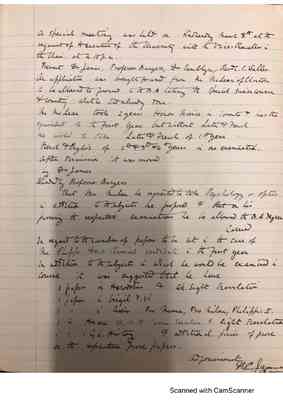 A special meeting was held on [?] March 8th at the request of the Executive of the University with U Vice-Chancellor in the Univ. at 4.15 p.m. Present Dr James, Professor Burgess, Dr. Tamblyn, Rev. C.C. Wallen An application was brought for and from Mr McLean of Clinton to be allowed to proceed to the B.A. taking the special science course [?] what he had already done. Mr McLean took 2 years Honor Science in Toronto & has the equivalent of the First Year but without Latin & French. He wished to take Latin & French of 1st year. French & English of 2nd & 3rd & 4th years in one examinatia[?]. After discussion it was moved by Dr. James Seconded by Professor Burgess That Mr. McLean be requested to take Psychology or optics in criteria to the subjects he proposed & that on his passing the respective examinations he be allowed the B.A. Degree Carried. In regard to the number of papers to be set in the case of Mr. Phipps Honor Chemical candidate in the First year In addition to the subjects in which he would be examined in course it was suggested that he have 1 paper in Harodotus & Gk. Sight Translation 1 paper in Virgil v.vi 1 " in Per Murera[?], Pro Murera[?], Philippi II. 1 in Horace III, IV & Carr[?] S[?] & sight translation 1 in Gk. History & [?] pices of prose or the respective prose papers. Adjournment N.C. James [?] 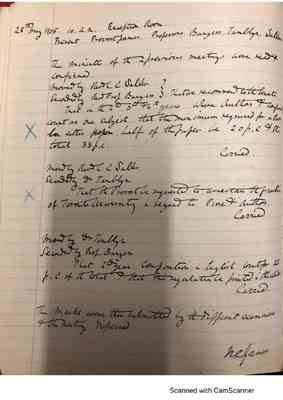 The minutes of the previous meetings were read & confirmed. Moved by Rev. C.C. Wallen Seconded by Rev Prof. Burgess That we recommend to the Senate that in the 2nd 3rd & 4th years where Authors & {?] count as one subject, that the minimum required for a Pass in either p[?] half of the paper be 20 p.c. & the total 33 p.c. Carried Moved by Rec. C.C. Wallen Seconded by Dr Tamblyn That the Provost be requested to ascertain the practice of Toronto Universty in regard to Prose & Authors. Carried Moved by Dr. Tamblyn Seconded by Prof Burgess That 2nd year composition in English [?] 25 p.c of the total & that this regulation be printed in the [?] Carried. The marks wre then submitted by the different examiners & the meeting dispensed N.C. James 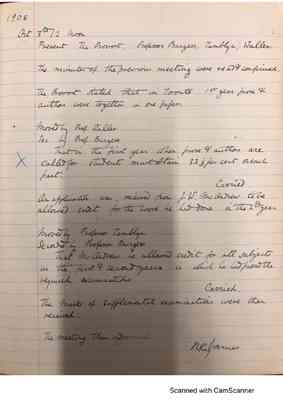 The minutes of the previous meeyting were read & confirmed.

The Provost stated that in Toronto 1st year prose & authors were together in one paper.

Moved Prof. Wallen Sec. by Prof. Burgess That i the First year when prose & authors are called for students must obtain 33 1/3 percent on each part. Carried An application was received from J.W. McArthur to be allowed credit for the work he had done in the 2nd year

Moved by Professor Tamblyn Seconded by Professor Burgess That McArthur be allowed credit for all subjects in the first & second years in which he had passed the required examinations Carried The marks of supplemental examinations were then received.

The meeting then adjourned. N.C. James 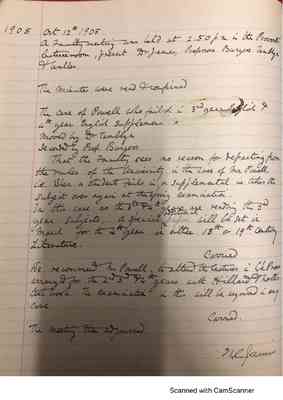 The minutes were read & confirmed

The case of Powell who failed in 3rd year English & 4th year English supplement[illegible] Moved by Dr Tamblyn Seconded by Prof. Burgess That the Faculty sees no reason for departing from the rules of the University in the case of Mr Powell, i.e. When a student fails in a supplemental he takes the subject over again at the spring examination. In this case as the 3rd & 4th years are reading the 3rd year subjects, as special [inserted] additional paper will be set in March for the 4th year in either 18th or 19th century literature. Carried We recommend Mr Powell, to attent the lectures in Gk. Prose arranged for the 2nd 3rd & 4th years with Hillard & North's text book the examination in this will be required in any case. Carried The meeting then adjourned. 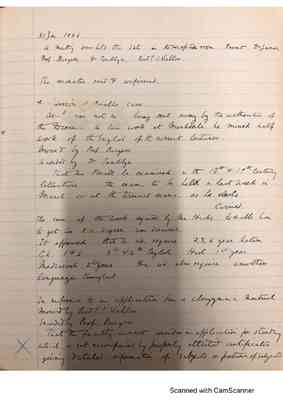 D[isc]ussion of Powell's case. As [?] was not [?] being sent away by the authorities of the Diocese to ta[?]e work at Markdale he missed half work of the English of the current lectures. Moved by Prof. Burgess Seconded by Dr. Tamblyn That Mr Powell be examined in the 18th & 19th century literature the exam to be held in last week in March or at the terminal exams, as he elects Carried The case of the work required by Mr Hicks to enable him to get his B.A. degree was discussed. It appeared that he wd. require 2,3,4 year Latin Gk 1 & 2, 3rd & 4th English Hist 1st year Mediaeval 2nd year. He wd also require another language throughout.

In reference to an application from a clergyman in Montreal Moved by Rev C.C. Wallen Seconded by Prof. Burgess That the Faculty cannot consider an application for starting which is not accompanied by properly attested certificates giving detailed information of subjects or positions of subjects 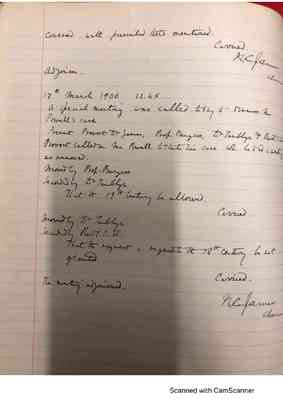 17th March 1906 12.45 A special meeting was called today to discuss Mr Powell's case Present Provost Dr James, Prof Burgess, Dr Tamblyn & Rev C.C. Wallen Provost called on Mr Powell to state his case wh. he did in writing as annexes. Moved by Prof. Burgess Seconded by Dr Tamblyn That the 19th Century be allowed. Carried. Moved by Dr Tamblyn Seconded by Rev C..C. W. That the request in regards to the 18th century be not granted. Carried The meeting adjourned. N.C. James Chairman