Professor Joseph Henry. According to this website https://siarchives.si.edu/collections/siris_sic_317 "Smithsonian Secretary Joseph Henry agrees to chair the U.S. Light-House Board, on which he had served since its establishment in 1852. In addition to his role as chairman of the board's committee on experiments, Henry was now responsible for overseeing the board's $1.6 million budget and a work force which included more than 800 lighthouse keepers. Henry arranges to devote one day a week to his new duties, in addition to his established practice of spending vacations conducting experiments and investigations in lighthouses or at sea. He fills this position until his death in 1878." 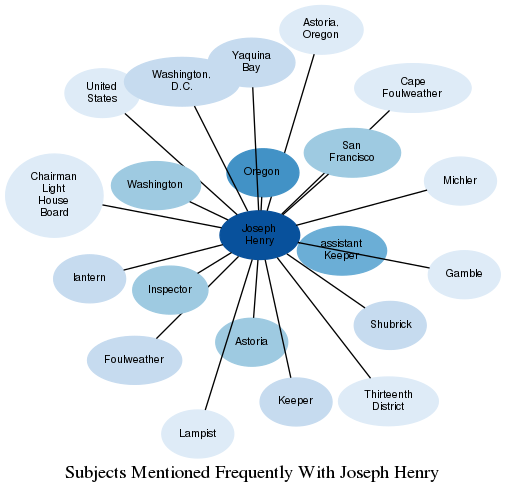 The graph displays the other subjects mentioned on the same pages as the subject “Joseph Henry”. If the same subject occurs on a page with “Joseph Henry” more than once, it appears closer to “Joseph Henry” on the graph, and is colored in a darker shade. The closer a subject is to the center, the more "related" the subjects are.

Show pages that mention Joseph Henry in all works