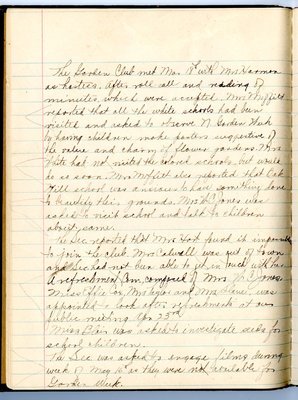 The Garden Club met Mar. 18th with Mrs. Harmon as hostess. After roll call and reading of minutes, which were accepted, Mrs. Moffitt reported that all the white schools had been visited and asked to observe N. Garden Week by having children make posters suggestive of the value and charm of flower gardens. Mrs. White had not visited the colored schools, but would do so soon. Mrs Moffitt also reported that Oak Hill school was anxious to have something done to beautify their grounds. Mrs. W. C. Jones was asked to visit school and talk to children about same.

The Sec. reported that Mrs. Hart found it impossible to join the club. Mrs. Calwell was out of town and Sec. had not been able to get in touch with her.

Miss Blair was asked to investigate seeds for school children.

The Sec. was asked to engage films during week of May 16th as they were not available for Garden Week. 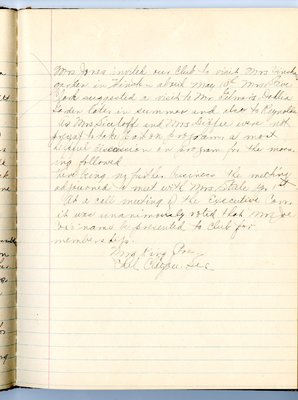 Mrs. Jones invited our Club to visit Mrs. Hinshaw's garden in Winston about May 10th. Mrs. Steve Clark suggested a visit to Mr. Gilmer's Dahlia Garden lates in summer and also to Reynolda.

As Mrs. Siceloff and Mrs. Diffee were not present to take part on program, a most helpful discussion on program for the morning followed.

There being no further business the meeting adjourned to meet with Mrs. Steele Apr. 1st.

At a call meeting of the executive Com. it was unanimously voted that Mrs. Joe Cox's name be presented to club for membership. 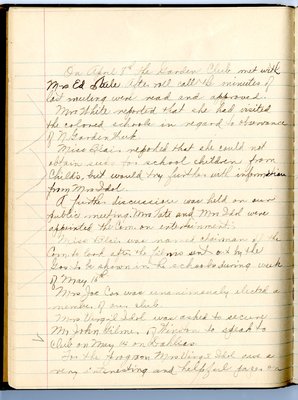 On April 8th the Garden Club met with Mrs. Ed Steele. After roll call the minutes of last meeting were read and approved.

Mrs. White reported that she had visited the colored schools in regard to observance of N. Garden Week.

Miss Blair reported that she could not obtain seeds for school children from Child's, but would try further with information from Mrs. Idol.

A further discussion was held on our public meeting. Mrs. Tate and Mrs. Idol were appointed the Com. on entertainment.

Miss Blair was named chairman of the Com. to look after the films sent out by the Gov. to be shown in the schools during week of May 16th.

Mrs. Joe Cox was unanimously elected a member of our club.

Mrs. Virgil Idol was asked to secure Mr. John Gilmer of Winston to speak to club on May 14 on Dahlias.

For the program Mrs. Virgil Idol gave a very interesting and helpful paper on 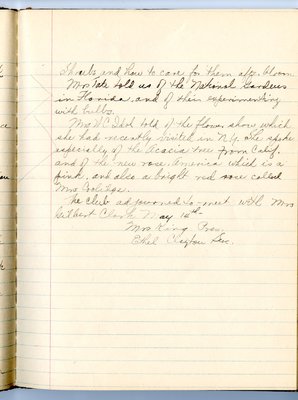 Shrubs and how to care for them after bloom.

Mrs. Tate told us of the National Gardens in Florida, and of their experimenting with bulbs.

Mrs. W. C. Idol told of the flower show which she had recently visited in N.Y. She spoke especially of the Acacia tree from Calif. and of the new rose, America which is a pink, and also a bright red rose called Mrs. Coolidge.

The club adjourned to meet with Mrs. Gilbert Clark May 14th. 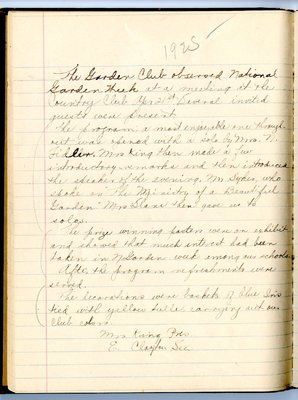 The program; a most enjoyable one throughout, was opened with a solo by Mrs. N. Fiddler. Mrs. King then made a few introductory remarks and then introduced the speaker of the evening, Mr. Sykes, who spoke on "The Ministry of a Beautiful Garden." Mrs. Slane then gave us to solos.

The prize winning posters were on exhibit and showed that much interest had been taken in N. Garden week among our schools.

After the program refreshments were served.

The decorations were baskets of blue Iris tied with yellow tulle, carrying out our club colors.