George Graham Vest (1830-1904) was a lawyer and politician who represented Missouri in both the House of Representatives and Senate of the Confederate States during the Civil War. After the war he returned to practicing law and became famous for a speech, "Tribute to a Dog", in a court case involving a hunting dog killed by a neighbor farmer. In 1879 he was elected to the U.S. Senate from Missouri and served until 1903. 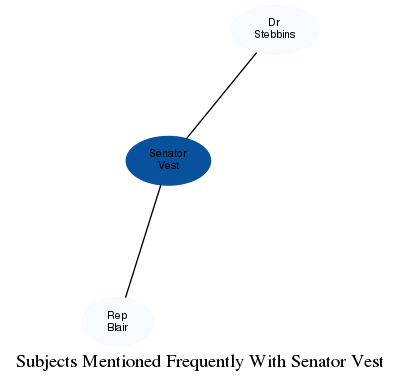 The graph displays the other subjects mentioned on the same pages as the subject “Senator Vest”. If the same subject occurs on a page with “Senator Vest” more than once, it appears closer to “Senator Vest” on the graph, and is colored in a darker shade. The closer a subject is to the center, the more "related" the subjects are.

Show pages that mention Senator Vest in all works