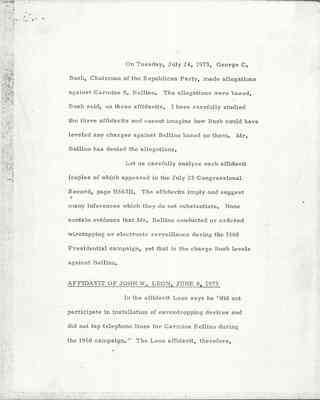 On Tuesday, July 24, 1973, George C. Bush, Chairman of the Republican Party, made allegations against Carmine S. Bellino. The allegations were based, Bush said, on three affidavits. I have carefully studied the three affidavits and cannot imagine how Bush could have leveled any charges against Bellino based on them. Mr. Bellino has denied the allegations.

Let us carefully analyze each affidavit (copies of which appeared in the July 25 Congressional Record, page H6631). The afffidavits imply and suggest many inferences which they do not substantiate. None contain evidence that Mr. Bellino conducted or ordered wiretapping or electronic surveillance during the 1960 Presidential campaign, yet that is the charge Bush levels against Bellino.

In the affidavit, Leon says he "did not participate in installation of eavesdropping devices and did not tap telephone lines for Carmine Bellino during the 1960 campaign." The Leon affidavit, therefore, 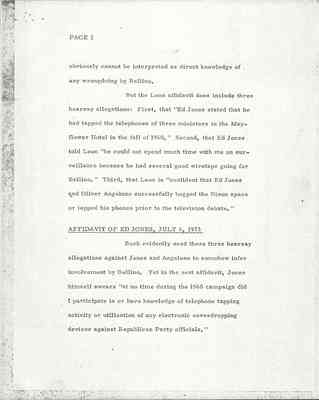 obviously cannot be interpreted as direct knowledge of any wrongdoing by Bellino.

But the Leon affidavit does include three hearsay allegations: First, that "Ed Jones stated that he had tapped the telephones of three ministers inthe Mayflower Hotel in the fall of 1960." Second, that Ed Jones told Leon "he could not spend much time with me on surveillance because he had several good wiretaps going for Bellino." Third, that Leon is "confident that Ed Jones and Oliver Angelone successfully bugged the Nixon space or tapped his phones prior to the television debate."

Bush evidently used these three hearsay allegations against Jones and Angelone to somhow infer involvement by Bellino. Yet in the next affidavit, Jones himself swears "at no time during the 1960 campaign did I participate in or have knowledge of telephone tapping activity or utilization of any electronic eavesdropping devices against Republican Party officials." 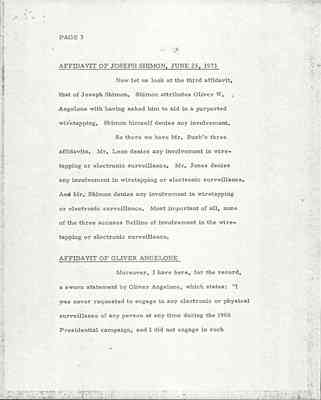 Now let us look at the third affidavit, that of Joesph Shimon. Shimon attributes Oliver W. Angelone with having asked him to aid in a purported wiretapping. Shimon himself denies any involvement.

Moreover, I have here, for the record, a sworn statement by Oliver Angelone, which states: "I was never requested to engage in any electronic or physical surveillance of any person at any time during the 1960 Presidental campaign, and I did not engage in such 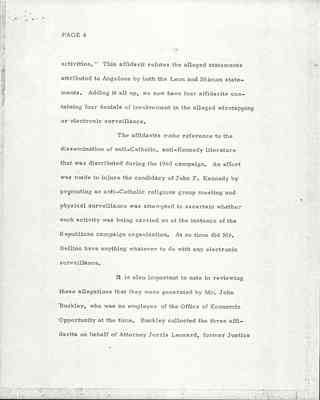 activities." This affidavit refutes the alleged statements attributed to Angelone by both the Leon and Shimon statements. Adding it all up, we now have four affidavits containing four denials of involvement in the alleged wiretapping or electronic surveillance.

The affidavits make reference to the dissemination of anti-Catholic, anti-Kennedy literature that was distributed during the 1960 campaign. An effort was made to injure the candidacy of John F. Kennedy by promoting an anti-Catholic religious group meeting and physical surveillance was attempted to ascertain whether such activity was being carried on at the instance of the Republican campaign organization. At no time did Mr. Bellino have anything whatever to do with any electronic surveillance.

It is also important to note in reviewing these allegations that they were generated by Mr. John Buckley, who was an employee of the Office of Economic Opportunity at the time. Buckley collected the three affidaits on behalf of Attorney Jerris Leonard, former Justice 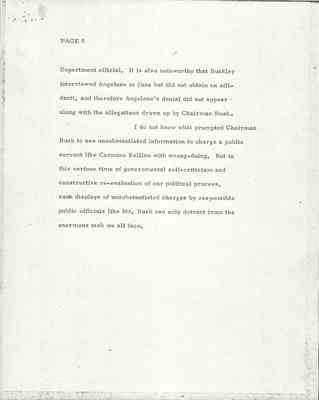 Department official. It is also noteworthy that Buckley interviewed Angelone in June but did not obtain an affidavit, and therefore Angelone's denial did not appear along with the allegations drawn up by Chairman Bush.

I do not know what prompted Chairman Bush to use unsubstantiated information to charge a public servant like Carmine Bellino with wrong-doing. But in this serious time of governmental self-criticism and constructive re-evaluation of our political process, such displays of unsubstantiated charges by responsible public officals like Mr. Bush can only detract from the enormous task we all face.