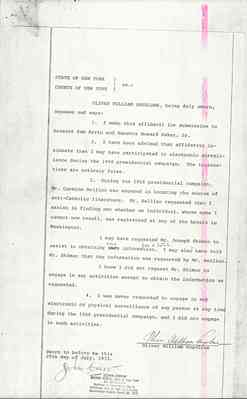 1. I make this affidavit for submission to Senator Sam Ervin and Senator Howard Baker, Jr.

2. I have been advised that affidavits insinuate that I may have participated in electronic surveillance during the 1960 presidential campaign. The insinuations are entirely false.

3. During the 1960 presidential campaign, Mr. Carmine Bellino was engaged in locating the source of anti-Catholic literature. Mr. Bellino requested that I assist in finding out whether an individual, whose name I cannot now recall, was registered at any of the hotels in Washington.

I may have requested Mr. Joseph to assist in obtaining some information from a hotel. I may also havetold Mr. Shimon that the information was requested by Mr. Bellino.

I know I did not request Mr. Shimon to engage in any activities except to obtain the information as requested.

4. I was never requested to engage in any electronic or physical surveillance of any person at any time during the 1960 presidential campaign, and I did not engage in such activities. 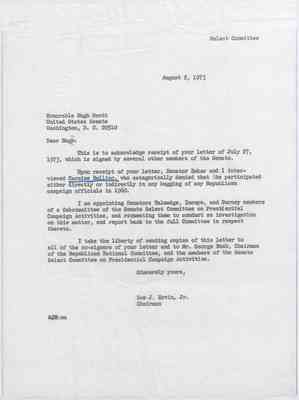 This si to acknowledge receipt of your letter of July 27, 1973, which is signed by several other members of the Senate.

Upon receipt of your letter, Senator Baker and I interviewed Carmine Bellino, who categorically denied that he participated either directly or indirectly in any bugging of any Republican campaign officials in 1960.

I am appointing Senators Tamladge, Inouyem and Gurney members of a Subcommittee of the Senate Select Committee on Presidential Campaign Activities, and requesting them to conduct an investigtion on this matter, and report back to the full Committee in respect thereto.

I take the liberty of sending copies of this letter to all of the co-signers of your letter and to Mr. George Bush, Chairman of the Republican National Committee, and the members of the Senate Select Committee of Presidential Campaign Activities. 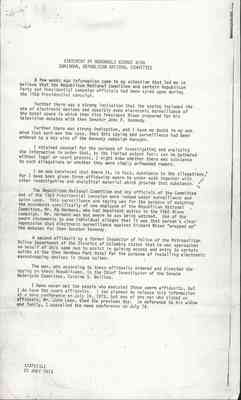 Further there was a strnog indication that the spying included the use of electronic devices and possibly even electronic surveillance of the hotel space in which then Vice President Nixon prepared for his television debated with then Senator John F. Kennedy

Further there was strong indication, and I have no doubt in my own mind that such was the case, that this spying and surveillance had been ordered by a key aide of the Kennedy campaign manager.

I retained counsel for the purpose of investigating and analyzing the information in order that, to the limited extent facts can be gathered without legal or court process, I might know whether there was substance to such allegations or whether they were simply unfounded rumors.

I am now convinced that there is, in fact, substant to the allegatios for I have been given three affidavits sworn to under oath together with other investigative and analytical material which provide that substance.

The Republican National Committee and key officials of the Committee and of the 1960 Presidential campaign were indeed under surveillance and spied upon. This surveillance and spying was for the purpose of watching the movements specifically of one employee of the Republican National Committee. Mr. Ab Hermann, who had important duties in the 1960 Nixon campaign. Mr. Hermann was not award he was being watched. One of the sworn statements by one individual alleges that it was that person's clear impression that electronic surveillance against Richard Nixon "wrapped up" the debates for then Senator Kennedy.

A second affidavit by a former Inspector of Police of the Metropolitan Police Department of the District of Columbia states that he was approached on behalf of this same man to assist in gaining access and entry to certain suites at the then Wardman Park Hotel for the purpose of installing electronic eavesdropping devices in those suites.

The man, who according to these affidavits ordered and directed the spying on these Republicans, is the Chief Investigator of the Senate Watergate Committee, Carmine S. Bellino 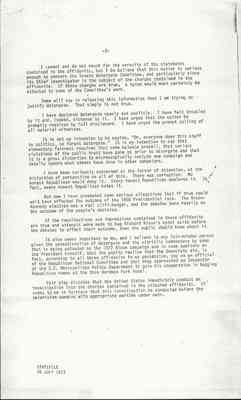 I cannot and do not vouch for the veracity of the statements contained in the affidavits, but I do believe that this matter is serious enough to concern the Senate Watergate Committee, and particuarly since its Chief Investigator is the subject of the charges contained in the affidavits. If these charges are true, a taint would most certainly be attached to some of the Committee's work.

Some will say in releasing this information that I am trying to justify Watergate. That simply is not true.

I have deplored Watergate openly and publicly. I have felt troubled by it and, indeed, sickened by it. I have urged that the matter be promptly resolved by full disclosure. I have urged the prompt calling of all material witnesses.

It is not my intention to be saying, "Oh, everyone does this stuff in politics, so forget Watergate." It is my intention to say that elementary fairness requires that some balance prevail, that serious violations of the public trust have gone on prior to Watergate and that it is a gross distortion to microscopically analyze one campaign and totally ignore what others have done in other campaigns.

But now I have presented some serious allegation that if true could well have affected the outcome of the 1960 Presidential race. The Nixon-Kennedy election was a real cliff-hanger, and the debates bore heavily on the outcome of the people's decision.

If the recollections and impressions contained in these affidavits are true and attempts were made to bug Richard Nixon's hotel suite before the debates to affect their outcome, then the public should know about it.

It also seems important to me, and I believe to any fair-minded person given the sensationalism of Watergate and the vitriolic commentary by some that is being unloaded on the 1972 Nixon campaign and in some quarters on the President himself, that the public realize that the Democrats did, in fact, according to all three affidavits in my possession, spy on an official of the Republican National Committee and that they approached an Inspector of the D.C. Metropolitan Police Department to gain his cooperation in bugging Republican rooms at the then Wardman Park Hotel.

Fair play dictates that the United States immediately conduct an investigation into the charges contained in the attached affidavits. It seems to me in fairness that this investigation be conducted before the television cameras with appropriate parties under oath. 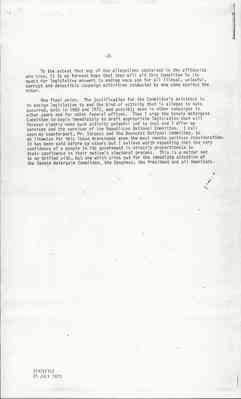 To the extent that any of the allegations contained in the affidavits are true, it is my fervent hope that they will aid this Committee in its quest for legislative answers to ending once and for all illegal, unlawful, corrupt and destestible campaign activities conducted by one camp against the other.

One final point. The justificiation for the Committee's existence is to design legislation to end the kind of activity that is alleged to have occurred, both in 1960 and 1972, and possibly even in other campaigns in other years and for other federal offices. Thus I urge the Senate Watergare Committee to begin immediately to drft appropriate legislation that will forever clearly make such activity unlawful and to that end I offer my services and the services of the Republican National Committee. I call upon my counterpart, Mr. Strauss and the Democratic National Committee, to do likewise for this issue transcends even the most remote partisan consideration. It has been said before by others but I believe worth repeating the very confidence of a people in its government is directly proportional to their confidence in their nation's electoral process. This is a matter not to be trifled with, but one which cries out for the immediate attention of the Senate Watergate Committee, the Congress, the President, and all Americans.