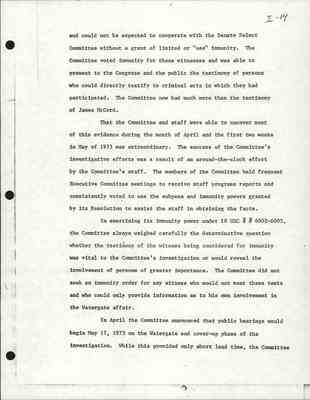 I-14 and could not be expected to cooperate with the Senate Select Committee without a grant of limited or "use" immunity. The Committee voted immunity for these witnesses and was able to present to the Congress and the public the testimony of persons who could directly testify to criminal acts in which they had participated. The Committee now had much more than the testimony of James McCord.

That the Committee and staff were able to uncover most of this evidence during the month of April and the first two weeks in May 1973 was extraordinary. The success of the Committee's investigative efforts was a result of an around-the-clock effort by the Committee's staff. The members of the Committee held frequent Executive Committee meetings to receive staff progress reports and consistantly voted to use the subpena and immunity powers granted by its Resolution to assist the staff in obtaining the facts.

In exercising its immunity power under 18 U.S.C. SS 6002-6005, the Committee always weighed carefully the determinative question whether the testimony of the witness being considered for immunity was vital to the Committee's investigation or would reveal the involvement of persons of greater importance. The Committee did not seek an immunity order for any witness who would not meet these tests and who could only provide information as to his own involvement in the Watergate affair.

In April the Committee announced that public hearings would begin May 17, 1973 on the Watergate and cover-up phase of the investigation. While this provided only short lead time, the Committee 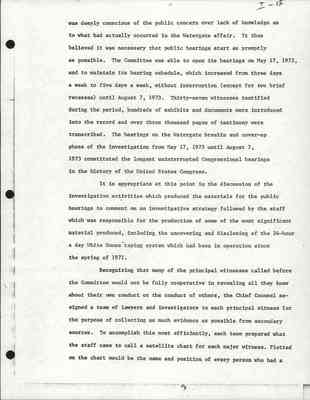 was deeply conscious of the public concern over lack of knowledge as to what had actually occured in the Watergate affair. It thus believed it was necessary that public hearings start as promptly as possible. The Committee was able to open its hearings on May 17, 1973, and to maintan its hearing schedule, which increased from three days a week to five days a week, without interruption (except for two brief recesses) until August 7, 1973. Thirty-seven witnesses testified during the period, hundreds of exhibits and documents were introduced into the record and over three thousand pages of testimony were transcribed. The hearings on the Watergate breakin and cover-up phase of the investigation from May 17, 1973 until August 7, 1973 constituted the longest uninterrupted Congressional hearings in the history of the United States Congress.

It is appropriate at this point in the discussion of the investigative activities which produced the materials for the public hearings to comment on an investigative strategy followed by the staff which was responsible for the production of some of the most significant material produced, including the uncovering and disclosing of the 24-hour a day White House taping system which had been in operation since the spring of 1971.

Recognizing that many of the principal witnesses called before the Committee would not fully cooperate in revealing all they knew about their own conduct or the conduct of others, the Chief Counsel assigned a team of lawyers and investigators to each principal witness for the purpose of collecting as much evidence as possible from secondary sources. To accomplish this most efficiently, each team prepared what the staff came to call a satellite chart for each major witness. Plotted on the chart would be the name and position of every person who had a 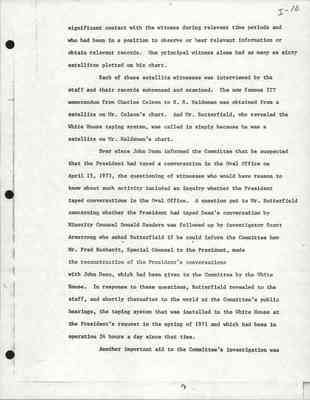 significant contact with the witness during relevant time periods and who had been in a position to observe or hear relevant information or obtain relevant records. One principal witness alone had as many as sixty satellites plotted on his chart.

Each of these satellite witnesses was interviewed by the staff and their records subpenaed and examined. The now famous ITT memorandum from Charles Colson to H. R. Haldeman was obtained from a satellite on Mr. Colson's chart. And Mr. Butterfield, who revealed the White House taping system, was called in simply because he was a satellite on Mr. Haldeman's chart.

Another important aid to the Committee's investigation was 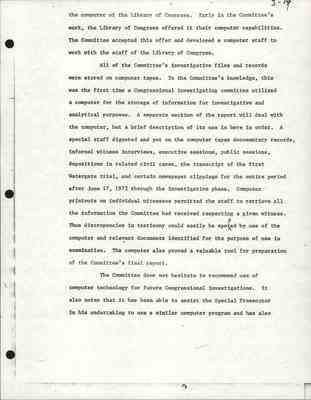 All of the Committee's investigative files and records were stored on computer tapes. To the Committee's knowledge, this was the first time a Congressional investigating committee utilized a computer for the storage of information for investigative and analytical purposes. A separate section of the report will deal with the computer, but a brief description of its use is here in order. A special staff digested and put on the computer tapes documentary records, informal witness interviews, executive sessions, public sessions, depositions in related civil cases, the transcript of the first Watergate trial, and certain newspaper clippings for the entire period after June 17, 1972 through the investigative phase. Computer printouts on individual witnesses permitted the staff to retrieve all the information the Committee had received respecting a given witness. Thus discrepancies in testimony could easily be spotted by use of the computer and relevant documents identified for the purpose of use in examination. The computer also proved a valuable tool for preparation of the Committee's final report.

The Committee does not hesitate to recommend use of computer technology for future Congressional investigations. It also notes that it has been able to assist the Special Prosecutor in his undertaking to use a similar computer program and has also 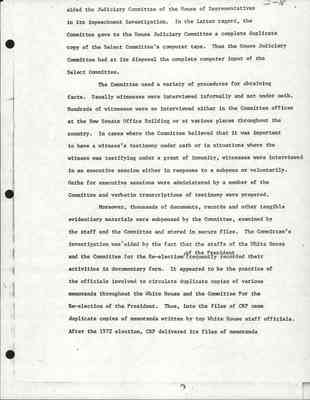