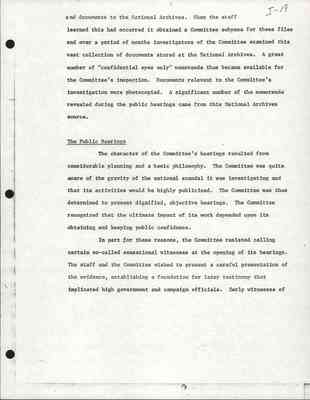 and documents to the National archive. When the staff learned this had occured it obtained a Committee subpena for these files and over a period of months investigators of the Committee examined this vast collection of documents stored at the National Archives. A great number of "confidential eyes only" memoranda thus became available for the Committee's inspection. Documents relevant to the Committee's investigation were photocopied. A significant number of the memoranda revealed during the public hearings came from this National Archives source.

The character of the Committee's hearings resulted from considerable planning and a basic philosophy. The Committee was quite aware of the gravity of the national scandal it was investigating and that its activities would be highly publicized. The Committee was thus determined to present dignified, objective hearings. The Committee recognized that the ultimate impact of its work depended upon its obtaining and keeping public confidence.

In part for these reasons, the Committee resisted calling certain so-called sensational witnesses at the opening of its hearings. The staff and the Committee wished to present a careful presentation of the evidence, establishing a foundation for later testimony that implicated high government and campaign officials. Early witnesses of 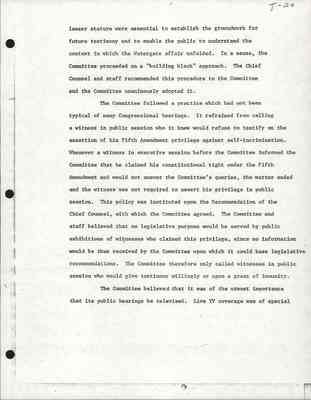 lesser stature were to establish the groundwork for future testimony and to enable the public to understand the context in which the Watergate affair unfolded. In a sense, the Committee proceeded on a "building block" approach. The Chief Counsel and staff recommended this procedure to the Committee and the Committee unanimously adopted it.

The Committee followed a practice which had not been typical of many Congressional hearings. It refrained from calling a witness in public session who it knew would refuse to testify on the assertion of his Fifth Amendment privilege against self-incrimination. Whenever a witness in executive session before the Committee informed the Committee that he claimed his constitutional right under the Fifth Amendment and would not answer the Committee's queries, the matter ended and the witness was not required to assert his privilege in public session. This policy was instituted upon the Recommendation of the Chief Counsel, with which the Committee agreed. The Committee and staff believed that no legislative purpose would be served by public exhibitions of witnesses who claimed this privilege, since no information would be thus received by the Committee upon which it could base legislative recommendations. The Committee therefore only called witnesses in public session who would give testimony willingly or upon the grant of immunity.

The Committee believed that it was of the utmost importance that its public hearings be televised. Live TV coverage was of special 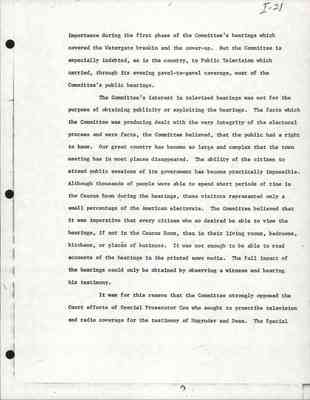 importance during the first phase of the Committee's hearings which covered the Watergate breakin and the cover-up. But the Committee is especially indebted, as is the country, to Public Television which carried, through its evening gavel-to-gavel coverage, most of the Committee's public hearings.

The Committee's interest in televised hearings was not for the purpose of obtaining publicity or exploiting the hearings. The facts which the Committee was producing dealt with the very integrity of the electoral process and were facts, the Committee believed, that the public had a right to know. Our great country has become so large and complex that the town meeting has in most places disappeared. The ability of the citizen to attend public sessions of its government has become practically impossible. Although thousands of people were able to spend short periods of time in the Caucus Room during the hearings, these visitors represented only a small percentage of the American electorate. The Committee believed that it was imperative that every citizen who so desired be able to view the hearings, if not in the Caucus Room, then in their living rooms, bedrooms, kitchens, or places of business. It was not enough to be able to read accounts of the hearings in the printed news media. The full impact of the hearings could only be obtained by observing a witness and hearing his testimony.

It was for this reason that the Committee strongly opposed the Court efforts of Special Prosecutor Cox who sought to proscribe television and radio coverage for the testimony of Magruder and Dean. The Special

Last edit 6 months ago by voodoodollbabie 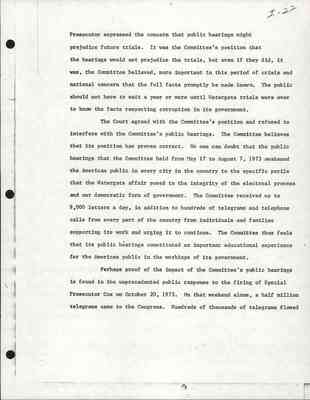 I-22 Prosecutor expressed the concern that public hearings might prejudice future trials. It was the Committee's position that the hearings would not prejudice the trials, but even if they did, it was, the Committee believed, more important in his period of crisis and national concern that the full facts be promptly be made known. The public should not have to wait a year or more until Watergate trials were over to know the facts respecting corruption in its government.

The Court agreed with the Committee's position and refused to interfere with the Committee's public hearings. The Committee believes that its position has proven correct. No one can doubt that the public hearings that the Committee held from May 17 to August 7, 1973 awakened the American public in every city in the country to the specific perils that the Watergate affair posed to the integrity of the electoral process and our democratic form of government. The Committee received up to 9,000 letters a day, in addition to hundreds of telegrams and telephone calls from every part of the country from individuals and families supporting its work and urging it to continue. The Committee thus feels that its public hearings constituted an important educational experience for the American public in the workings of its government.

Perhaps proof of the impact of the Committee's public hearings is found in the unprecedented public response to the firing of Special Prosecutor Cox on October 20, 1973. On that weekend alone, a half million telegrams came to the Congress. Hundreds of thousands of telegrams flowed

Last edit 6 months ago by voodoodollbabie 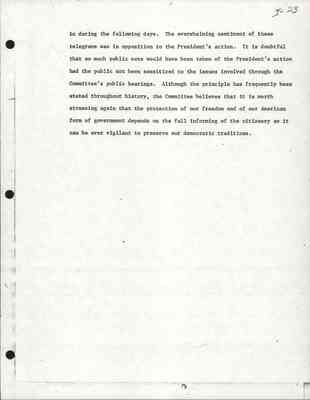 I-23 in during the following days. The overwhelming sentiment of these telegrams was in opposition to the President's action. It is doubtful that so much public note would have been taken of this President's action had the public not been sensitized to the issues involved through the Committee's public hearings. Although the principle has frequently been stated throughout history, the Committee believes that it is worth stressing again that the protection of our freedom and of our American form of government depends on the full informing of the citizenry so it can be ever vigilant to preserve our democratic traditions.