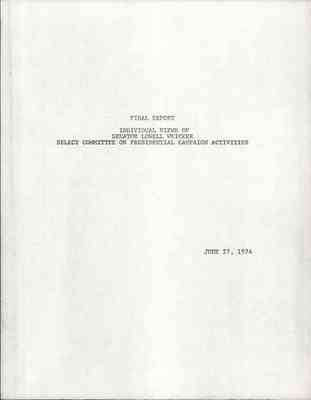 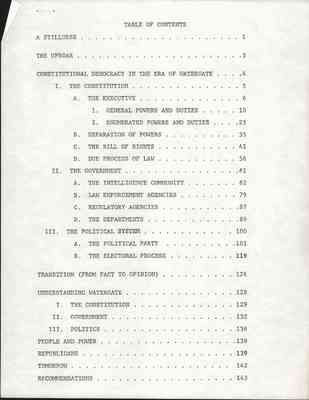 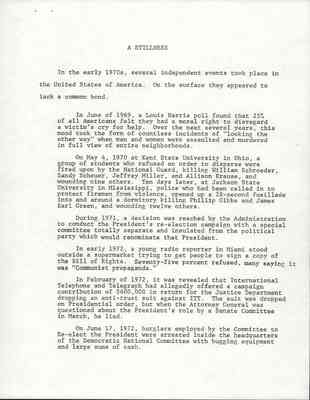 In the early 1970s, several independent events took place in the United States of America. On the surface they appeared to lack a common bond.

In June of 1969, a Louis Harris poll found that 25% of all Americans felt they had a moral right to disregard a victim's cry for help. Over the next several years, this mood took the form of countless incidents of "looking the other way" when men and women were assaulted and murdered in full view of entire neighborhoods.

On May 4, 1970 at Kent State University in Ohio, a group of students who refused an order to disperse were fired upon by the National Guard, killing William Schroeder, Sandy Scheuer, Jeffrey Miller, and Allison Krause, and wounding nine others. Ten days later, at Jackson State University in Mississippi, police who had been called into protect firemen from violence, opened up a 28-second fusillade into and around a dormitory killing Phillip Gibbs and James Earl Green, and wounding twelve others.

During 1971, a decision was reached by the Administration to conduct the President's re-election campaign with a special committee totally separate and insulated from the political party which would renominate that President.

In early 1972, a young radio reporter in Miami stood outside a supermarket trying to get people to sign a copy of the Bill of Rights. Seventy-five percent refused, many saying it was "Communist propaganda."

In February of 1972, it wsa revealed that International Telephone and Telegraph had allegedly offered a campaign contribution of $400,000 in return for the Justice Department dropping an anti-trust suit agaist ITT. The suit was dropped on Presidential order, but when the Attorney General was questioned about the President's role by a Senate Committee in March, he lied.

On June 17, 1972, burglars employed by the Committee to Re-elect the President were arrested inside the headquarters of the Democratic National Committee with bugging equipment and large sums of cash. 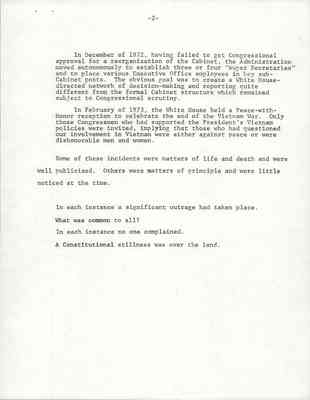 In December of 1972, having failed to get Congressional approval for a reorganization of the Cabinet, the Administration moved to autonomously to establish three or four "super Secretaries" and to place various Executive Office employees in key subCabinet posts. The obvious goal was to create a White Housedirected network of decision-making and reporting quite different from the formal Cabinet structure which remained subject to Congressional scrutiny.

In February of 1973, the White House held a Peace-withHonot reception to celebrate the end of the Vietnam War. Only those Congressmen who had supported the President's Vietnam policies were invited, implying those who had questioned our involvement in Vietnam were either against peace or were dishonorable men and women. 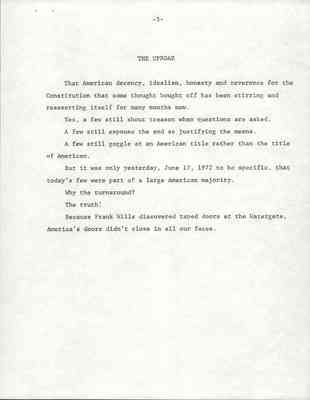 That American decency, idealism, honesty and reverence for the Constitution that some thought bought off has been stirring and reasserting itself for many months now.

Yes, a few still shout treason when questions are asked. A few still espouse the end as justifying the means. A few still goggle at an American title rather than the title of American.

But it was only yesterday, June 17, 1972 to be specific, that today's few were part of a large American majority.

Because Frank Wills discovered taped doors at the Watergate, America's doors didn't close in all our faces.