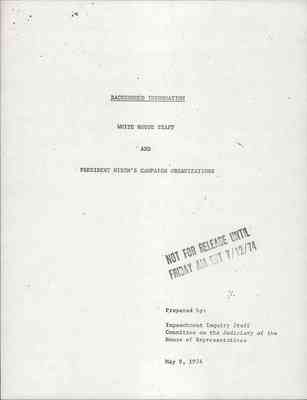 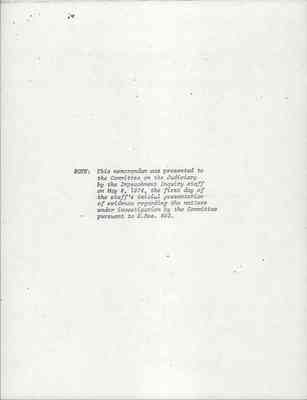 NOTE: This memorandum was presented to the Committee on the Judiciary by the Impeachment Inquiry staff on May 9, 1974, the first of the staff's initial presentation of evidence regarding the matters under investigation by the Committee pursuant to H.Res. 803. 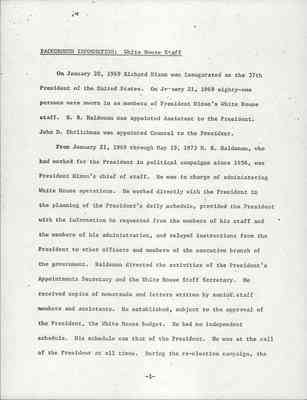 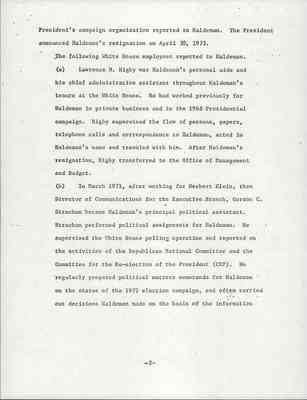 The following White House employees reported to Haldeman. (a) Lawrence M. Higby was Haldeman's personal aide and his chief administrative assistant throughout Haldeman's tenure at the White House. He had worked previously for Haldeman in private business and in the 1968 Presidential campaign. Higby supervised the flow of persons, papers, telephone calls and correspondence to Haldeman, acted in haldeman's name and traveled with him. After Haldeman's resignation, Higby transferred to the Office of Management and Budget.

(b) In March 1971, after working for Herbert Kelin, then Director of Communications fro the Executive Branch, Gordon C. Strachan became Haldeman's principal political assistant. Strachan performed political assignments for Haldeman. He supervised the White House polling operation and reported on the activities of the Republican National Committee and the Committee for the Re-election of the President (CRP). He reguarly prepared political matters memoranda for Haldeman on the status of the 1972 election campaign, and often carried out decisions Haldeman made on the basis of the information 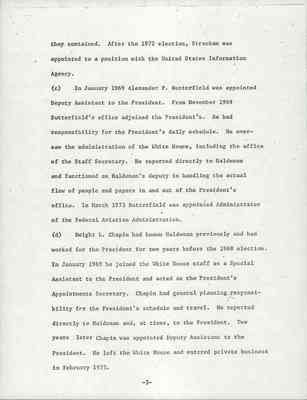 appointed to a position with the United State Information Agency.