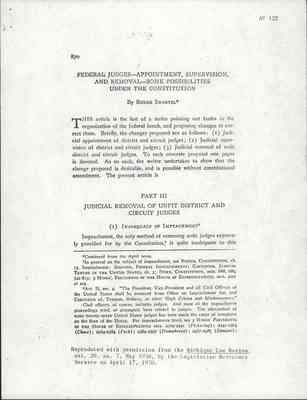 FEDERAL JUDGES - APPOINTMENT, SUPERVISION, AND REMOVAL - SOME POSSIBILITIES UNDER THE CONSTITUTION

Impeachment, the only method of removing unfit judges expressly provided for by the Constitution,(2) is quite inadequate to this ------------------------------- *Continued from the April issue. (1) In general on the subject of impeachment, see FOSTER, CONSTITUTION, ch. 13, Impeachment; SIMPSON, FEDERAL IMPEACHMENTS; CARPENTER, JUDICIAL TENURE IN THE UNITED STATES, ch. 3; STORY, CONSTITUTION, secs. 688, 689, 724-813; 3 HINDS', PRECEDENTS OF THE HOUSE OF REPRESENTATIVES, secs. 2001 et. seq. (2) Art. II, sec. 4. "The President, Vice-President and all Civil Officers of the United States shall be removed from Office on Impeachment for, and Conviction of, Treason, Bribery, or other High Crimes and Misdemeanors." Civil officers, of course, includes judges. And most of the impeachment proceedings tried, or attempted, have related to judges. The misconduct of some twenty-seven United States judges has been made the cause of complaint on the floor of the House. For impeachments tried, see 3 HINDS' PRECEDENTS OF THE HOUSE OF REPRESENTATIVES sec. 2319-2341 (Pickering); 2343-2363 (Chase); 2364-2384 (Peck); 2384-2397 (Humphreys); 2467-2485 (Swayne); 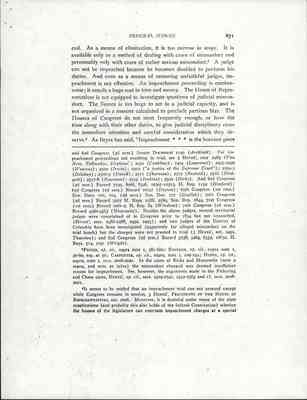 end. As a means of elimination, it is too narrow in scope. It is available only as a method of dealing with cases of misconduct and presumably only with cases of rather serious misconduct. 3 A judge can not be impeached because he becomes disabled to perform his duties. And even as a means of removing unfaithful judges, impeachment is not effective. An impeachment proceeding is cumbersome; it entails a huge cost in time and money. The House of Representatives is not equipped to investigate questions of judicial misconduct. The Senate is too large to act in a judicial capacity, and is not organized in a manner calculated to preclude partisan bias. The Houses of Congress do not meet frequently enough, or have the time along with their other duties, to give judicial disciplinary cases the immediate attention and careful consideration which they deserve.4 As Bryce has said, "Impeachment • • • is the heaviest piece

4 It seems to be settles in that an impeachment trial can not proceed except while Congress remains in session, 3 HINDS', PRECEDENTS OF THE HOUSE OF REPRESENTATIVES, sec. 2006. Moreover, it is doubtful under many of the state constitutions (and probably this also holds of the federal Constitution) whether the house of the legislature can entertain impeachment charges at a special 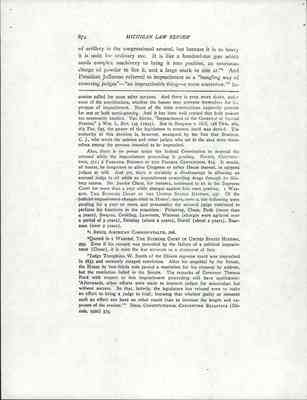 of artillery in the congressional arsenal, but because it is so heavy it is unfit for ordinary use. It is like a hundred-ton gun which needs complex machinery to bring it into position, an enormous charge of powder to fire it, and a large mark to aim at."5 And President Jefferson referred to impeachment as a "bungling way of removing judges''-"an impracticable thing-a mere scarecrow."6 In-

session called for some other purpose. And there is even more doubt, under most of the constitutions, whether the houses may convene themselves for the purpose of impeachment. Some of the state constitutions expressly provide for one or both contingencies. And it has been well argued that both powers are necessarily implied. Van Hecke, "Impeachment of the Governor at Special Session," 3 WIS. L. REV. 155 (1925). But in Simpson v. Hill, 128 Okla. 269, 263 Pac. 635, the power of the legislature to convene itself was denied. The authority of this decision is, however, weakened by the fact that Branson, C. J., who wrote the opinion and other judges who sat in the case were themselves among the persons intended to be impeached.

Also, there is no power under the fedral Constitution to suspend the accused while the impeachment proceeding is pending. FOSTER, CONSTITUTION, 511 ; 2 FARRAND, RECORDS OF THE FEDERAL CONVENTION, 612. It would, of course, be dangerous to allow Congress or either House thereof, to suspend judges at will. And yet, there is certainly a disadvantage in allowing an accused judge to sit while an impeachment proceeding drags through its dilatory course. Mr. Justice Chase, for instance, continued to sit in the Supreme Court for more than a year while charges against him were pending. 1WARREN, THE SUPREME COURT IN THE UNITED STATES HISTORY, 297. Of the judicial impeachment charges cited in HINDS', supra, note 2, the following were pending for a year or more, and presumably the accused judge continued to perform his functions in the meantime: Pickering, Chase, Peck (more than 4 years), Swayne, Conkling, Lawrence, Watrous (charges were agitated over a period of 9 years), Delahay (about 2 years), Durell (about 2 years), Boarman (over 2 years).

6 Quoted in 1 WARRE'N, THE: SUPREME COURT IN UNITED STATES HISTORY, 295, Even if his remark was provoked by the failure of a political impeachment (Chase), it is none the less accurate as a statement of fact.

"Judge Theophilus W. Smith of the Illinois supreme court was impeached in 1833 and narrowly escaped conviction. After his acquittal by the Senate, the House by two-thirds vote passed a resolution for his removal by address, but the resolution failed in the Senate. The remarks of Governor Thomas Ford with respect to this impeachment proceeding still have application: 'Afterwards, other efforts were made to impeach judges for misconduct but without success. So that, latterly, the legislature has refused even to make an effort to bring a judge to trial; knowing that whether guilty or innocent such an effort can have no other result than to increase the length and expenses of the session.'" DODD, CONSTITUTIONAL CONVENTION BULLETINS (Illinois, 1920) 575 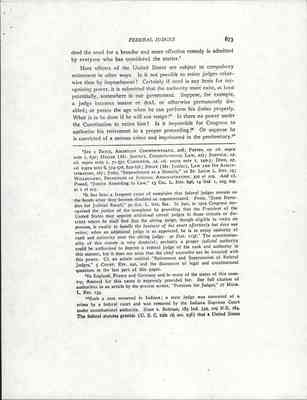 deed the need for a broader and more effective remedy is admitted by everyone who has considered the matter.7

Most officers of the United States are subject to compulsory retirement in other ways. Is it not possible to retire judges otherwise than by impeachment? Certainly if need is any basis for recognizing power, it is submitted that the authority must exist, at least potentially, somewhere in our government. Suppose, for example, a judge becomes insane or deaf, or otherwise permanently disabled; or passes the age when he can perform his duties properly. What is to be done if he will not resign?8 Is there no power under the Constitution to retire him? Is it impossible for Congress to authorize his retirement in a proper proceeding?9 Or suppose he is convicted of a serious crime and imprisoned in the penitentiary.10

8 It has been a frequent cause of complaint the federal judges remain on the bench afterthey become disabled or superannuated. Frost, "Some Remedies for Judicial Recall," 50 AM. L. REV. 801. In fact, in 1919 Congress recognized the justice of the complaint by providing that the President of the United States may appoint additional circuit judges in those circuits or districts where he shall find that the sitting judge, though eligible to retire on pension, is unable to handle the business of his court effectively but does not retire; when an additional judge is so appointed, he is to enjoy seniority of rank and authority over the sitting judge. 40 Stat. 1157. The constitutionaality of this statute is very doubtful; probably a proper judicial authority could be authorized to deprive a federal judge of his rank and authority in this manner, but it does not seem that the chief executive can be invested with this power. Cf. an article entitled "Retirementand Supersession of Federal Judges," 5 CONST. REV. 240, and the discussion of legal and constitutional questions in the last part of this paper.

9 In England, France and Germany and in many of the states of this country, removal for this cause is expressly provided for. See full citation of authorities in an article by the present writer, "Pensions for Judges," 27 MICH. L. REV. 134.

10 Such a case occurred in Indiana; a state judge was convicted of a crime by a federal court and was removed by the Indiana Supreme Court under constitutional authority. State v. Redman, 183 Ind. 332, 109 N.E. 184. The federal statutes provide (U.S. C. title 18 sec. 238) that a United States 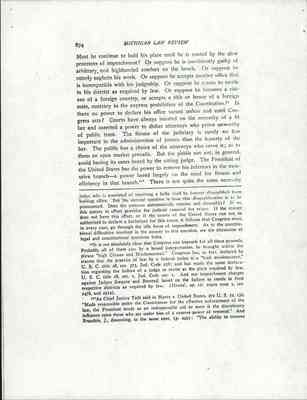 Must he continue to hold his place until he is ousted by the slow processes of impeachment? Or suppose he is consistently guilty of arbitrary and highhanded conduct on the bench. Or suppose he uttc_rlyneglects his work. Or suppose he accepts another office that is incompatible with his judgeship. Or suppose he ceases to reside in his district as required by law. Or suppose he becomes a citizen of a foreign country, or accepts a title or honor of a foreign state, contrary to the express prohibition of the Constitution.11 Is there no power to declare his office vacant unless and until Congress acts? Courts have always insisted on the necessity of a fit bar and asserted a power to disbar attorneys who prove unworthy of public trust. The fitness of the judiciary is surely no less important to the administration of justice than the honesty of the bar. The public has a choice of the attorneys who serve it; as to them an open market prevails. But the public can not, in general, avoid having its cases heard by the sitting judge. The President of the United States has the power to remove his inferiors in the executive branch- power based largely on the need for fitness and efficiency in that branch.11 2 There is not quite the same necessity

Judge who is convicted of receiving a bribe shall be forever disqualified from holding office. But the natural question is how this disqualification is to be pronounced. Does the sentence automatically remove and disqualify? If so, this statute in effect provides for judicial removal for crime. If the statute does not have this effect, or if the courts of the United States can not be authorized to declare a forfeiture for this cause, it follows that Congress must, in every case, go through the idle form of impeachment. As to the contitutional difficulties involved in the answer to this question, see the discussion of legal and constitutional questions infra.

11 It is not absolutely clear that Congress can impeach for all these grounds. Probably all of them can, by a broad interpretation, be brough within the phrase "high Crimes and Misdemeanors." Congress has, in fact, declared by statute that the