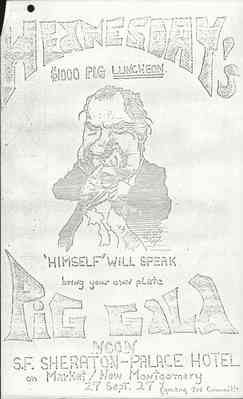 'HIMSELF' WILL SPEAK bring your own plate PIG GALA 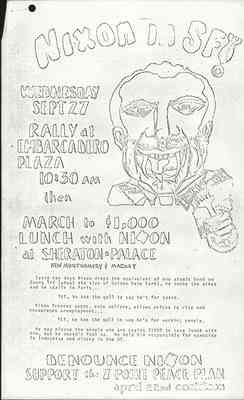 WEDNESDAY SEPT 27 RALLY at EMBARCADERO PLAZA 10:30 AM then MARCH TO $1,000 LUNCH with NI[X]ON at SHERATON-PALACE NEW MONTGOMERY & MARKET

Every ten days Nixon drops the equivalent of one atomic bomb on Quang Tri (about the size of Golden Gate Park), he bombs the dikes and he stalls in Paris . . .

YET, he has the gall to say he's for peace.

YET, he has the gall to say he's for working people.

He may please the people who are paying $1000 to have lunch with him, but he doesn't fool us. We hold him responsible for genocide in Indochina and misery in the US. 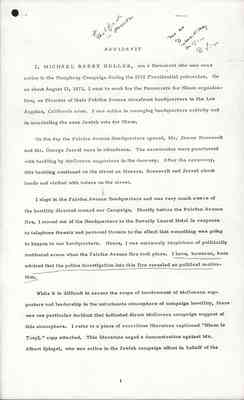 I, MICHAEL BARRY HELLER, am a Democrat who was once active in the Humphrey Campaign during the 1972 Presidential primaries. On or about August 13, 1972, I went to work for the Democrats for Nixon organization, as Director of their Fairfax Avenue storefront headquarters in the Los Angeles, Californa area. I was active in managing headquarters activity and in marshaling the area Jewish vote for Nixon.

On the day the Fairfax Avenue Headquarters opened, Mr. James Roosevelt and Mr. George Jessel were in attendance. The ceremonies were punctuated with heckling by McGovern supporters in the doorway. After the ceremony, this heckling continued on the street as Messrs. Roosevelt and Jessel shook hands and visited with voters on the street.

While it is difficult to assess the scope of involvement of McGovern supporters and leadership in the unfortunate atmosphere of campaign hostility, there was one particular incident that indicated direct McGovern campaign support of this atmosphere. I refer to a piece of scurrilous literature captioned "Nixon is Treyf," copy attached. This literature urged a demonstration against Mr. Albert Siegel, who was active in the Jewish campaign effort in behalf of the 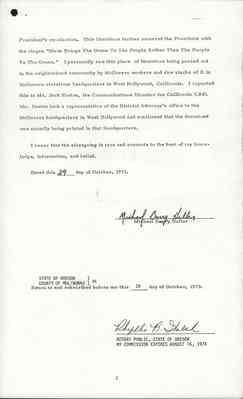 President's re-election. This literature further smeared the President with the slogan "Nixon Brings The Ovens To The People Rather Than The People To The Ovens." I personally saw this piece of literature being passed out in the neighborhood community by McGovern workers and saw stacks of it in McGovern storefront headquarters in West Hollywood, California. I reported this to Mr. Jack Easton, the Communications Director for Californa CRP. Mr. Easton took a representative of the District Attorney's office to the McGovern headquarters in West Hollywood and confirmed that the document was actually printed in that Headquarters.

I swear that the aforegoing is true and accurate to the best of my knowledge, information, and belief.

STATE OF OREGON ) COUNTY OF MULTNOMAH ) ss Sworn to and subscribed before me this 29 day of October, 1973. 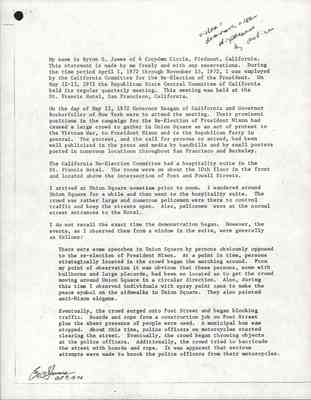 My name is Byron S. James of 6 Croydon Circle, Piedmont, California. This statement is made by me freely and with any reservations. During the time period April 1, 1972 through November 15, 1972, I was employed by the California Committee for Re-Election of the President. On May 12-13, 1972 the Republican State Central Committee of California held its regular quarterly meeting. This meeting was held at the St. Francis Hotel, San Francisco, California.

On the day of May 12, 1972 Governor Reagan of California and Governor Rockerfeller of New York were to attend the meeting. Their prominent positions in the campaign for the Re-Election of President Nixon had caused a large crowd to gather in Union Square as an act of protest to the Vietnam War, to President Nixon and to the Republican Party in general. The protest, and the call for persons to attend, had been well publicized in the press and media by handbills and by small posters posted in numerous locations throughout San Francisco and Berkeley.

The California Re-Election Committee had a hospitality suite in the St. Francis Hotel. The rooms were on about the 10th floor in the front and located above the intersection of Post and Powell Streets.

I arrived at Union Square sometime prior to noon. I wandered around Union Square for a while and then went to the hospitality suite. The crowd was rather large and numerous policemen were there to control traffic and keep the streets open. Also, policemen were at the normal street entrances to the Hotel.

I do not recall the exact time the demonstration began. However, the events, as I observed them from a window in the suite, were generally as follows:

There were some speeches in Union Square by persons obviously opposed to the re-election of President Nixon. At a point in time, persons strategically located in the crowd began the marching around. From my point of observation it was obvious that these persons, some with bullhorns and large placards, had been so located as to get the crowd moving around Union Square in a circular direction. Also, during this time I observed individuals with spray paint cans to make the peace symbol on the sidewalks in Union Square. They also painted anti-Nixon slogans.