attorneys, when the regular officer is absent or disqualified, in order to prevent a failure of justice.

6. EQUITY -- contrcution of bill. A bill in equity must be construed most strongly against the pleader.

Appeal by the plaintiffs from the Circuit Court of Marshall county; the Hon. JOHN M. NIEHAUS, Judge, presiding. Heard in this court at the October term, 1929. Affirrmed. Opinion filed May 13, 1930.

MR. JUSTICE JONES delivered the opinion of the court. Appellants filed their bill in equity to restrain the county of Marshall and its county treasurer from paying, and R. M. Barnes, J. A. Magoon, and E. E. Horton, attorneys at law, practicing under the firm name of Barnes, Magoon, & Horton, from recieving money under a contract entered into between the county of Marshall and said law firm; and also to require the law firm to return the sum of $500 paid on the contract.

The bill was filed December 12, 1928. It alleges that complainants are taxpayers of Marshall county; that L. C. McMurtrie became State's Attorney in 1924 and from thence until his death, on October 26, 1928, was 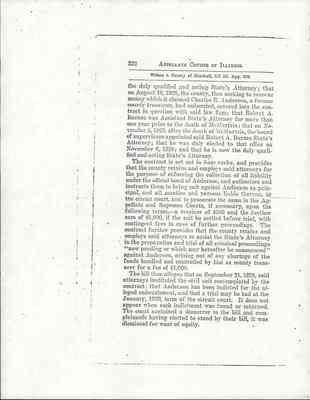 The contract is set out in haec verba, and provides that the county retains and employs said attorneys for the purpose of enforcing the collection of all liability under the official bond of Anderson, and authorizes and instructs them to bring suit against Anderson as principal, and all sureties and persons liable thereon, in the circuit court, and to prosecute the same in the Appellate and Supreme Courts, if necessary, upon the following terms, - a retainer of $500 and the further sum of $1,000, if the suit be settled before trial, with contingent fees in case of further proceedings. The contract further provides that the county retains and employs said attorneys to assist the State's Attorney in the preperation and trial of all criminal proceedings "now pending or which may hereafter be commenced" against Anderson, arising out of any shortage of the funds handled and controlled by him as county treasurer for a fee of $1,000.

The bill then alleges that on September 21, 1928, said attorneys instituted the civil suit contemplated by the contract; that Anderson has been indicted for the alleged embezzlement, and that a trial nay be had at the January, 1929, term of the circuit court. It does not appear when such indictment was found or returned. The court sustained a demurrer to the bill and complainants having elected to stand by their bill, it was dismissed for want of equity. 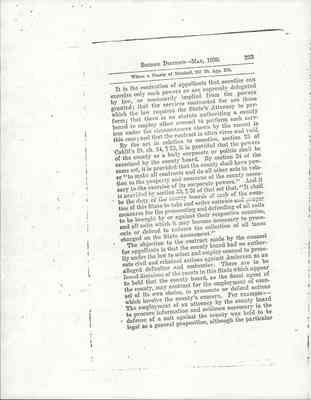 It is the contention of appellants that counties can exercise only such powers as are expressly delegated by law, or necessarily implied from the powers granted; that the services contracted for are those which the law requires the State's Attorney to perform; that there is no statute authorizing a county board to employ other counsel to perform such services under the circumstances shown by the record in this case; and that the contract is ultra vires and void.

By the act in relation to counties, section 23 of Cahill's St. ch. 34, ¶ 23, it is provided that the powers of the county as a body corporate or politic chall be exercised by the county board. By section 24 of the same act, it is provided that the county shall have power "to make all contracts and do all other acts in relation to the property and concerns of the county necessary to the exercise of its corporate powers." And it is provided by section 33, ¶ 36 of that act that, "It shall be the duty of the county boards of each of the counties of this State to take and order suitable and proper measures for the prosecuting and defending of all suits to be brought by or against their respective counties, and all suits which it may become necessary to prosecute or defend to enforce the collection of all taxes charged on the State assessment."

The objection to the contract made by the counsel for appellants is that the county board had no authority under the law to select and emplly counsel to prosecute civil and criminal actions against Anderson as an alleged defaulter and embezzler. There are to be found decisions of the courts in this State which appear to hold that the county board, as the fiscal agent of the county, may contract for the employment of counsel of its own choice, to prosecute or defend actions which involve the county;s concern. For example:- The employment of an attorney by the county board to procure information and evidence necessary in the defense of a suit against the county was held to be legal as a general proposition, although the particular 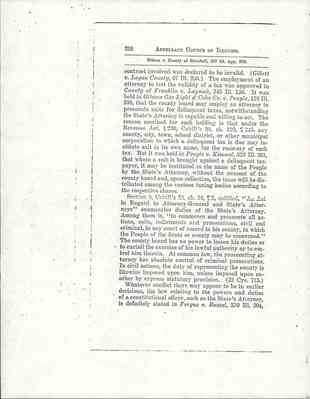 contract involved was declared to be invalid. (Gillett v. Logan County, 67 Ill. 256.) The employment of an attorney to test the validity of a tax was approved in County of Franklin v. Layman, 145 Ill. 138. It was held in Ottawa Gas Light & Coke Co. v. People, 138 Ill. 336, that the county board may employ an attorney to prosecute suits for delinquent taxes, notwithstanding the State's Attorney is capable and willing to act. The reason ascribed for such holding is that under the Revenue Act, § 230, Cahill's St. ch. 120, ¶ 245, any county, city, town, school district, or other municipal corporation to which a delinquent tax is due may institute suit in its own name, for the recovery of such tax. But it was held in People v. Kimmell, 323 Ill. 261, that where a suit is brought against a delinquent taxpayer, it may be instituted in the name of the People by the State's Attorney, without the consent of the county board and, upon collection, the taxes will be distributed among the various taxing bodies according to the respective shares.

Section 5, Cahill's St. ch. 14, ¶ 5, entitled, "An Act in Regard to Attorney-General and State's Attorneys" enumerates duties of the State's Attorney. Among them is, "to commence and prosecute all actions, suits, indictments and prosecutions, civil and criminal, in any court of record in his county, in which the People of the State or county may be concerned." The county board has no power to lessen his duties or curtail the exercise of his lawful authority or to control him therein. At common law, the prosecuting attorney has absolute control of criminal prosecutions. In civil actions, the duty of representing the county is likewise imposed upon him, unless imposed upon another by express statutory provision. (32 Cye. 715.)

Whatever conflict there may appear to be in earlier decisions, the law relating to the powers and duties of a constitutional officer, such as the State's Attorney, is definitely stated in Fergus v. Russel, 270 Ill. 304, 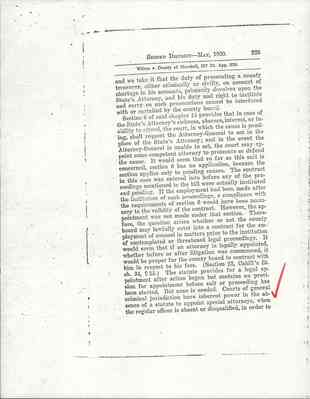 and we take it that the duty of prosecuting a county treasurer, either criminally or civilly, on account of shortage in his accounts, primarily devolves upon the State's Attorney, adn his duty and right to institute and carry on such prosecutions cannot be interfered with or curtailed by the county board.

Section 6 of said chapter 14 provides that in case of the State's Attorney's sickness, absence, interest, or inability to attend, the court, in which the cause is pending, shall request the Attorney-General to act in the place of the State's Attorneyl and in the event the Attorney-General is unable to act, the court may appoint some competent attorney to prosecute or defend the cause. It would seem that so far as this suit is concerned, section 6 has no application, because the section applies only to pending causes. The contract in this case was entered into before any of the proceedings mentioned in the bill were actually instituted and pending. If the employment had been made after the institution of such proceedings, a compliance with the requirements of section 6 would have been necessary to the validity of the contract. However, the appointment was not made under that section. Therefore, the question ariese whether or not the county board may lawfully enter into a contract for the employment of counsel in matters prior to the institution of contemplated or threatened legal proceedings. It would seem that if an attorney is legally appointed, whether before or after litigation was commenced, it would be proper for the county board to contract with him in respect to his fees. (Section 23, Cahill's St. ch. 34, ¶ 23.) The statute provides for a legal appointment after action begun but contains no provision for appointment before suit or proceeding has been started. But none is needed. Courts of general criminal jurisdiction have inherent power in the absence of a statute to apppint special attorneys, when the regular officer is absent or disqualified, in order to