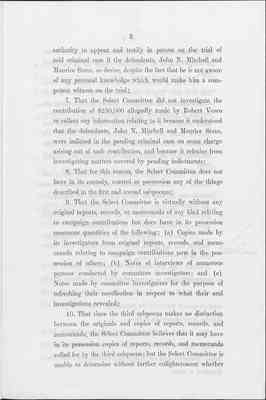 authority to appear and testify in person on the trial of said criminal case if the defendants, John N. Mitchell and Maurice Stans, so desire, despite the fact that he is not aware of any personal knowledge which would make him a competent witness on the trial;

7. That the Select Committee did not investigate, the contribution of $250,000 allegedly made by Robert Vesco or collect any information relating to it because it understood that the defendants, John N. Mitchell and Maurice Stans, were indicted in the pending criminal case on some charge arising out of such contribution, and because it refrains from investigating matters covered by pending indictments;

8. That for this reason, the Select Committee does not have in its custody, control or possession any of the things described in the first and second subpoenas;

9. That the Select Committee is virtually without any original reports, records, or memoranda of any kind relating to campaign contributions but does have in its possession enormous quantities of the following; (a) Copies made by its investigators from original reports, records, and memoranda relating to campaign contributions now in the possession of others; (b) Notes of interviews of numerous persons conducted by committee investigators; and (c) Notes made by committee investigators for the purpose of refreshing their recollection in respect to what their oral investigations revealed;

10. That since the third subpoena makes no distinction between the originals and copes of reports, records, and memoranda, the Select Committee believes that it may have in its possession copies of reports, records, and memoranda called for by the third subpoena; but the Select Committee is unable to determine without futher enlightenment whether 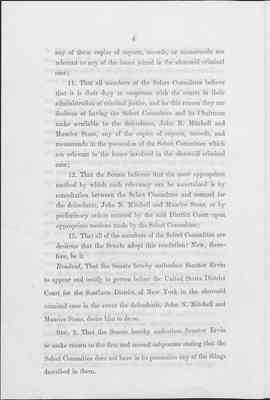 any of these copies of reports, records, or memoranda are relevant to any of the issues joined in the aforesaid criminal case;

13. That all of the members of the Select Committee are desirous that the Senate adopt this resolution: Now, therefore, be it,

Resolved, That the Senate hereby authorizes Senator Ervin to appear and testify in person before the United States District Court for the Southern District of New York in the aforesaid criminal case in the event the defendants, John N. Mitchell and Maurice Stans, desire him to do so.

SEC. 2. That the Senate hereby authorizes Senator Ervin to make return to the first and second subpoenas stating that the Select Committee does not have in its possession any of the things described in them. 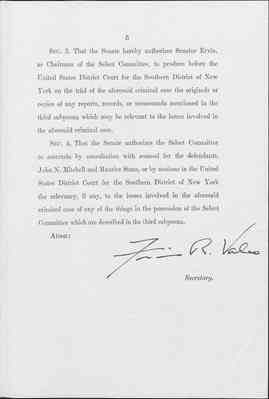 SEC. 3. That the Senate hereby authorizes Senator Ervin, as Chairman of the Select Committee, to produce before the United States District Court for the Southern District of New York on the trial of the aforesaid criminal case the originals or copies of any reports, records, or memoranda mentioned in the third subpoena which may be relevant to the issues involved in the aforesaid criminal case.

SEC. 4. That the Senate authorizes the Select Committee to ascertain by consultation with counsel for the defendants, John N. Mitchell and Maurice Stans, or by motions in the United States District Court for the Southern District of New York the relevancy, if any, to the issues involved in the aforesaid criminal case of any of the things in the possession of the Select Committee which are described in the third subpoena.