ReadAboutContentsHelp
Manuscript details battles and scenes of battles, which occurred mostly in Mississippi, written by a member of the 2nd Ohio, later of the 83rd Ohio. (Manuscript lacks p. 22.) 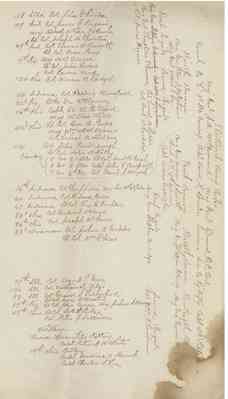 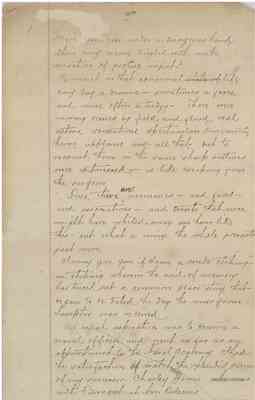 1 Were you ever under a surgeon's hand, when every werre tingled with mute sensation of precise import?

So was it in that abnormal state of life; every day a drama — sometimes a farce and more often a tradgy - There were moving scenes by field and flood, real actors, sensations, spectacular movements, heros, applause and all that, but to recount them in the same sharp outlines once witnessed — is like escaping from the surgeon.

True, there are memories — and faces — and associations — and events that once might have whiled away an hour like this - but what a maize the whole presents just now.

I may give you if I can, a crude etching - an etching wherein the acid of memory has traced out a common place story, that began to be dated the day he went from Sumpter was received

My boyish aspiration was to become a naval officer and went as far as an appointment to the Naval Academy. I had the satisfaction of watching the splendid career of my successor Charley Jones, who was with Farraquh at New Orleans. 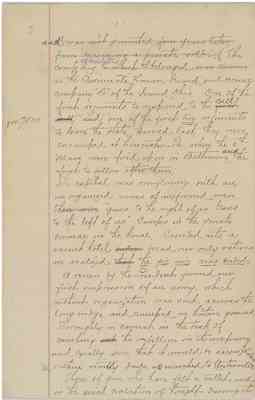 2 and was not prevented four years later, from becoming a private soldier. (The company of militia to which I belonged, was known as the Cincinnati Zouave Guard, and became company "D" of the Second Ohio. One of the first regiments to respond to the first call for 75,000 and one of the first two regiments to leave the state, hurried East, they were encamped at Lancaster Pa. when the 6th Mass were fired upon in Baltimore, and the first to follow after them.

The capital was over flowing with an unorganized mass of uniformed men. There were "guns to the right of us. Guns to the left of us". Camps in the senate bivouac in the house. Crowded into a vacant hotel batters bread our only rations we realized that the pic nic was ended.

A review by the President formed our first impression of an army, which without organization was sent accross the long bridge and camped on historic ground

Thoroughly in earnest in the task of crushing out the rebellion in its incipiancy and equally sure that it would be accomplished it within [??ninety??] days. we marched to Centerville

Those of you who have felt a bullet and in the quick evolution of thought, during its 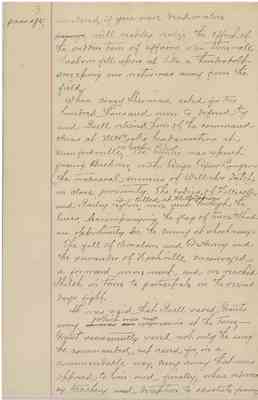 3. passage, wondered, if you were dead or alive passage, will readilly realize the effect of the sudden turn of affairs when Stonewall Jackson fell upon us. like a thunder bolt sweeping our victorious army from the field.

When crazy Sherman asked for two hundred thousand men to defend Ky and Buell relieved him of the command I was at McCooks headquarters at Munfordsville, ^on Green River^ The winter was spent facing Buckner, with Terrys Texas Rangers (the naturaral enemiesof Wellicks dutch) in close proximity. The bodies of Zollicoffer and Bailey Peyton ^killed at Mill Springs^ were sent through the lines, Accompanying the flag of truce I had an opportunity see the enemy at short range

The fall of Donalson and Ft Henry and the surrender of Nashville, encouraged a forward movement and we reached Shiloh in time to participate in the second days fight.

It was said that Buell saved Grants army, it was our which was my impression at the Time, — Grant subsequently saved not only the army he commanded, but cared for, in a commendable way. Every army that was opposed to him and finally, when reduced by treachery and deception to absolute penury,

Last edit 4 months ago by Bernie 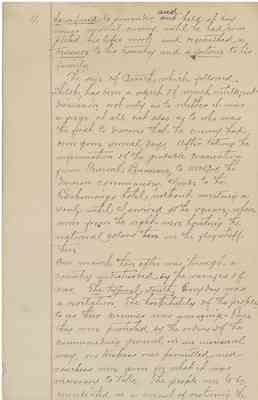 4. he refused to surrender, but and held at bay mans mortal enemy, until he had com pleted his lifes work and bequeathed a treasure to his country and a fortune to his family.

The seige of Corinth which followed Shiloh, has been a subject of much intelligent discussion, not only as to whether it was a siege at all but also as to who was the first to discover that the enemy had been gone several days, After taking the information of the probable evacuation from General Rousseau, to McCook the division commander, I rode to the Tischomingo hotel without meeting a soul until I arrived at the square; where men from the right were hoisting the national colors there on the flagstaff there.

Our march there after was through a country undisturbed by the ravages of war. The typical south, everyday was a revelation. The hospitality of the people to us their enemies was amazing.—True they were protected by the orders of the commanding general in an unusual way, no trespass was permitted, and vouchers were given for what it was necessary to take. The people were to be conciliated as a means of restoring the