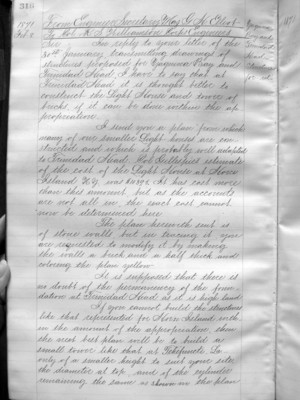 1871 Feb. 8 From Engineer Secretary Maj. G H Elliot To Col R.S. Williamson Corps Engineers Sir: In reply to your letter of the 30th January transmitting drawings of structures proposed for Yaquina Bay and Trinidad Head. I have to say that at Trinidad Head it is thought better to construct the Light House and tower of bricks, if it can be done within the appropriation. I send you a plan from which many of our smaller Light-houses are constructed and which is probably well adapted to Trinidad Head. Col. Gillespie's estimate of the cost of the Light House at Horse Island N.Y. was $10,395. It has cost more than this amount but as the accounts are not all in the exact cost cannot now be determined here. The plan herewith sent is of stone walls, but in tracing it, you are requested to modify it by making the walls a brick and a half thick and coloring the plan yellow. It is supposed that there is no doubt of the permanency of the foundation at Trinidad Head as it is high land. If you cannot build the structures like that represented for Horse Island with in the amount of the appropriation, then the next best plan will be to build a small tower like that at Tchefuncte, La. only of a smaller height to suit your site the diameter at top and of the cylinder remaining the same as shown in the plan

Show pages that mention Horse Island N.Y. in all works