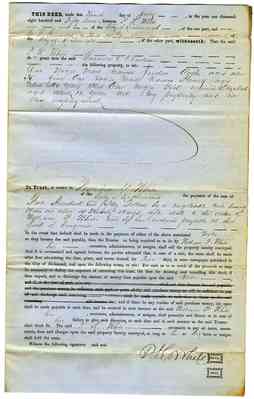 THIS DEED, name this Ninth day of July, in the year one thousand eight hundred and Fifty Seven, between P K White of the City of Richmond, of the one part, and C G Griswold & H A Claiborne of the City of Richmond, of the other part, witnesseth: That the said P K White doth grant unto Griswold & Claiborne the following property, to wit: One Negro Man Named Jordan Coots aged about 35 years One Negro Man Named Henry aged about 40 years Also One Negro Girl Named Elizabeth aged about 12 years All my property and in my employment

In Trust, to secure William F White of the City of Richmond the payment of the sum of Five Hundred and fifty Dollars by a Negotiable Note bearing date as above at Ninety days after date to the order of William F White and by him endorsed payable at the Bank of Virginia In the event that default shall be made in the payment of either of the above mentioned Note as they become due and payable, then the Trustee on being required so to do by William F White his executors, adminstrators, or assigns, shall sell the property hereby conveyed. And it is covenanted and agreed between the parties aforesaid that, in case of a sale, the same shall be made after first advertising the time, place, and terms thereof, for Five days, in some newspaper published in the City of Richmond, and upon the following terms, to wit: For cash as to so much of the proceeds as may be necessary to defray the expenses of executing this trust, the fees for drawing and recording this deed, if then unpaid, and to discharge the amount of money then payable upon the said Note, [[struck]: and if at the time of such sale, any [blank] shall not have become due and payable, and the purchase money be sufficient, such part or parts of the said purchase money as will be sufficient to pay off and dischange such remaining [blank] shall be made payable at such time or times as the said remaining [blank] will become due]]; and if there be any residue of said purchase money, the same shall be made payable at such time, and be secured in such manner as the said William F White his, executors, administrators, or assigns, shall prescribe and direct, or in case of his failure to give such direction at such time and in such manner as the said Trustee shall think fit. The said P K White covenants to pay all taxes, assessments, dues and charges upon the said property hereby conveyed, so long as he or his heirs or assigns shall hold the same. Witness the following signature and seal 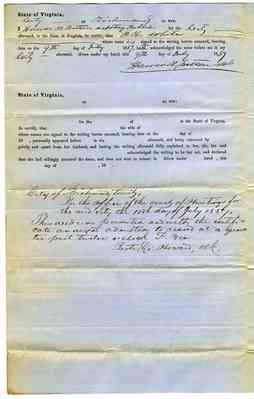 State of Virginia, City OF Richmond TO WIT: I Hawes R Sutton a Notary Public for the City aforesaid, in the State of Virginia, do certify, that P. K. White whose name is signed to the writing hereto annexed, bearing date on the 9th day of July 1857, hath acknowledged the same before me in my City aforesaid. Given under my hand, this 9th day of July 1857 Hawes R. Sutton NP

State of Virginia, [blank] OF [blank] TO WIT: [blank] for the [blank] of [blank] in the State of Virginia, do certify that [blank] the wife of [blank] whose names are signed to the writing hereto annexed, bearing date on the [blank] day of [blank] 18[blank], personally appered before [blank] in the [blank] aforesaid, and being examined by [blank] privily and apart from her husband, and having the writing aforesaid fully explained to her, she, the said [blank] acknowledged the writing to be her act, and declared that she had willingly executed teh same, and does not wish to retract it. Given under [blank] hand [blank], this [blank] day of [blank], 18[blank].

City of Richmond, towit; In the Office of the Court of Hustings for the said city the 10th day of July 1857. This deed was presented and with the certi= cate annexed admitted to record at a quar= ter past twelve o'clock P. M. Teste, Ro: Howard, clk, 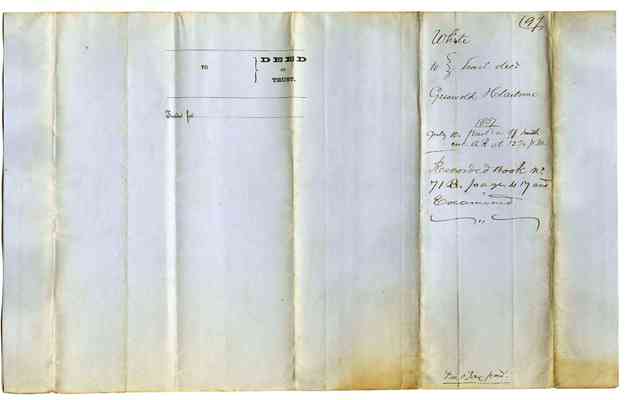 Last edit 6 months ago by Gbcassada
Displaying all 3 pages