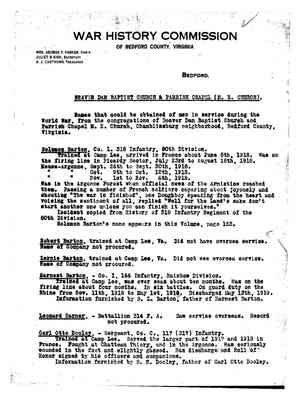 BEDFORD. BEAVER DAM BAPTIST CHURCH & PARRISH CHAPEL (M. E. CHURCH). Names that could be obtained of men in service during the World War, from the congregations of Beaver Dam Baptist Church and Parrish Chapel M. E. Church, Chamblissburg neighborhood, Bedford County, Virginia. Solomon Barton, Co. L 318 Infantry, 80th Division. Trained at Camp Lee, arrived in France about June 5th, 1918. Was on the firing line in Picardy Sector, July 23rd to August 18th, 1918. Meuse-Argonne, Argonne, Sept. 26th to Sept. 30th, 1918. " " Oct. 9th to Oct. 12th, 1918. " " Nov. 1st to Nov. 6th, 1918. Was in the Argonne Forest when official news of the Armistic reached them. Passing a number of French soldiers capering about joyously and shouting "The war is finiashed". one Doughboy speaking from the heart and boicing the sentiment of all, replied "Well for the Land's sake don't start another one unless you can finish it yourselves." Incident copied from History of 318 Infantry Regiment of the 80th Division. Solomon Barton's name appearsin the Volume, page 153. Rober Barton, trained at Camp Lee, Va. Did not have aversea service. Name of Company not procured. Zernie Barton, trained at Camp Lee, Va. Did not see oversea service. Name of Company not procured. Earnest Barton, - Co. I, 166 Infantry, Rainbow Division. Trained at Camp Lee, was over seas about ten months. Was on the firing line about four months. In six battles. On guard duty on the Rhine from Nov. 11th 1918 to May 1st 1918. Discharged May 13th, 1919. Information furnished by S. L. Barton, father of Earnest Barton. Leonard Carner, - Battallion 314 F. A. Saw service overseas. Record not procured. Carl Otto Dooley, - Sergeant, Co. C. 117 (317) Infantry. Trained at Camp Lee. Servied the alrger part of 1917 and 1918 in France. Fought at Chatteau Thiery, and in the Argonne. Was seriously wounded in the foot and slightly gassed. Had discharge and Roll of Honor signed by his offices and companions. Information furnished by S. H. Dooley, father of Carl Ott Dooley.

Last edit 2 months ago by dwarfield 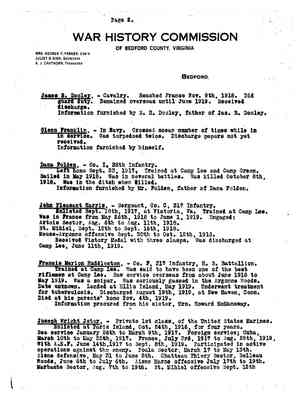 Last edit 2 months ago by dwarfield 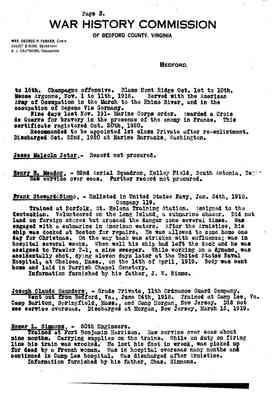 to 15th. Champagne offensive. Blanc Mont Ridge Oct. 1st to 10th. Meuse Argonne, Nov 1 to 11th 1918. Served with the American Army of Occupation in the March to the Rhine River, and in the occupation of Segens Vis Germany. Nine days lost Nov. 191- Marine Corps order. Awarded a Crois de Guerre for bravery in the presence of the enemy in France. This . certificate registed Oct. 20th, 1920. Recommended to be appointed 1st class Private after re-enlistment. Discharged Oct. 22nde. 1920 at Marine Barracks, Washington.

[underlined] Frank Stewart Nimmo. - Enlisted in United States Navy, Jan. 24th, 1918. Company 119. Trained at Norfolk, St. Helena Training Station. Assigned to the Kentuckian. Volunteered on the Long Island, a submarine chaser. Did not land on foreign shores but crossed the danger zone several times. Was engaged with a submarine in American waters. After the Armistice, his ship was docked At Boston for repairs. He was allowed to come home one day for Christmas. On the way back was stricken with enfluenza; was in hospital several weeks. When well his ship had left the dock and he was assigned to Trawler T-1, a mine sweeper. While working on a dynamo, was accidentally shot, dying eleven days later at the United States Naval Hospital, at Chelsea, Mass., on the 14th of April, 1919. Body was sent home and laid in Parrish Chapel Cemetery. Information furnished by his father, J. W. Nimmo.

[underlined] Homer L. Simmons. - 60th Engineers. Trained at Fort Benjamin Harrison. Saw service over seas about nine months. Carrying supplies on the trains. While on duty on firing line, his train was wrecked. He lost his foot in wreck, was picked up for dead by a French woman. Was in hospital overseas many months and continued in Camp Lee hospital. Was discharged after Armistice. Information furnished by his father, Chas. Simmons

Last edit 2 months ago by jmphillips 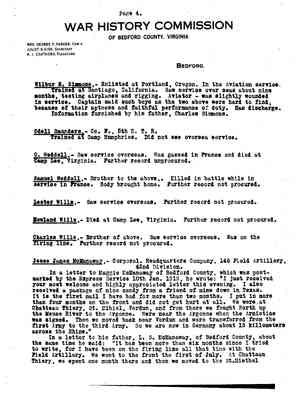 [underlined] Wilbur E. Simmons. - Enlisted at Portland, Oregon. In the Aviation service. Trained at Santiago, California. Saw service over seas about nine months, testing airplanes and rigging. Aviator - was slightly wounded in service. Captain said such boys as the two above were hard to find, because of their aptness and faithful performance of duty. Has discharge. Information furnished by his father, Charles Simmons.

[underlined] Samuel Weddell.- Brother to the above. Killed in battle while in service in France. Body brought home. Further record not procured.

[underlined] Charles Wills. - Brother of above. Saw service overseas. Was on the firing line. Further record not procured.

In a letter to Maggie McManaway of Bedford County, which was postmarked by the Express Service 10th Jan. 1919, he wrote: "I just received your most welcome and highly appreciated letter this evening. I also received a package of nice candy from a friend of mine down in Texas. It is the first mail I have had for more than two months. I put in more than four months on the front and did not get hurt at all. We were at Chatteau Thiery, St. Mihiel, Verdun, and from there we fought North up the Meuse River to the Argonne. Were near the Argonne when the Armistice was signed. Then we moved back near Verdun and were transferred from the first Army to the third Army. So we are now in Germany about 15 killometers across the Rhine." In a letter to his father, L.S. McManaway, of Bedford County, about the same time he said: "It has been more than six months since I tried to write, for I have been on the firing line all that time with the Field Artillery. We went to the front the first on July. At Chatteau Thiery, we spent one month there and then we moved to the St. [Miethel?] 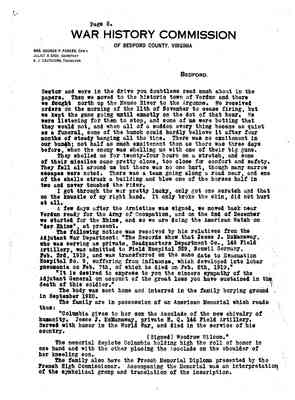 Sector and were in the drive you doubtless read much about in the papers. Then we moved to the historic town of Verdun and there we fought north up the Meuse River to the Argonne. We recieved orders on the morning of the 11th of November to cease firing, but we kept the guns going until exactly on the dot of that hour. We were listening for them to stop, and some of us were betting that they would not, and when all of a sudden every thing became as quiet as a funeral, some of the bunch could hardly believe it after four months of steady banging all the time. There was no excitement in our bunch; not half as much excitement then as there was three days before, when the enemy was shelling us with one of their big guns.

They shelled us for twenty-four hours on a stretch, and some of their missiles came pretty close, too close for comfort and safety. They fell all around us but there was no one hurt, though many narrow escapes were noted. There was a team going along a roadnear, and one of the shells struck a building and blew one of the horses half in two and never touched the rider.

I got through the war pretty lucky, only got one serateh and that on the knuckle of my right hand. It only broke the skin, did not hurt at all.

A few days after the Armistice was signed, we moved back near Verdun ready for the Army of Occupation, and on the 2nd of December we started for the Rhine, and so we are doing the American Watch on "der Rhine", at present.

The following notice was received by his relatives from the Adjutant War Department: "The Records show that Jesse J. McManaway, who was serving as private, Headquarters Department Co., 146 Field Artillery, was admitted to Field Hospital 329. Neuwil Germany, Feb. 3rd, 1919, and was transferred on the same date to Evacuation Hospital No. 9, suffering from influences, which developed into lobar pneumonia on Feb. 7th, of which he died on Feb. 8th, 1919."

It is desired to express to you the sincere sympathy of the Adjutant General on account of the greatloss you have sustained in the death of this soldier."

The body was sent home and interred in the family burying ground in September 1920.

The family are in possession of an American Memorial which reads thus:

"Columbia gives to her son the Accolade of the new chivalry of humanity. Jesse J. McManaway, private H. Q. 146 Field Artillery. Served with honor in the World War, and died in the service of his country. (Signed) Woodrow Wilson."

The memorial depicts Columbia holding high the roll of honor in one hand and with the other placing the Accolade on the shoulder of her kneeling son.

The family also have the French Memorial Diploma presented by the French High Commissioner. Accompaning [Accompanying] the Memorial was an interpretation of the symbolical group and translation of the inscription.