Orin Grant Libby was born June 9, 1864, on a farm near Hammond, Wisconsin. He attended the River Falls State Normal School and graduated in 1886. He received his undergraduate degree in 1892, his master's degree in 1893, and his Ph.D. in 1895, all from the University of Wisconsin. Libby was an instructor in the Department of History at the University of Wisconsin - Madison from 1895 to 1902. He moved to Grand Forks, North Dakota in 1902, became head of the History Department at the University of North Dakota, and retired in 1945. Dr. Libby helped reorganize the State Historical Society of North Dakota and served as its secretary from 1905 to 1945. He was president of the North Dakota Audubon Society from 1903 to 1909, president of the State Library Commission in 1909, and president of the Mississippi Valley Historical Association in 1910. He was a member of the Lions Club, the Franklin Club, Masons, Phi Beta Kappa, Alpha Pi Zeta, and Sigma Alpha Epsilon. Dr. Libby married Eva Gertrude Cory in September 12, 1900. They had two children, Charles and Margeret. Orin Libby died at his home in Grand Forks, North Dakota on March 29, 1952. The Orin G. Libby Manuscript Collection was established in 1952 at the University of North Dakota and is named in his honor. The Reading Room at the State Historical Society of North Dakota was similarly named in memory of Dr. Libby in 1982. 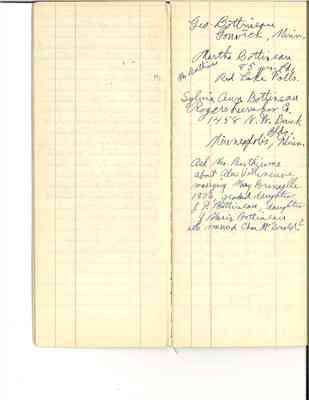