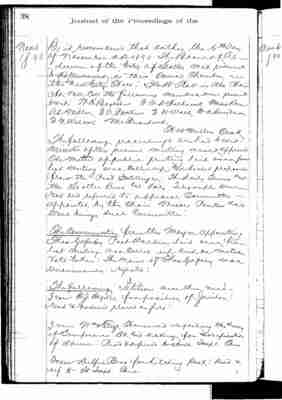 38 Journal of the Proceedings of the

Be it remembered that on this the 6th day of November A.D. 1890 the Board of Aldermen of the City of Seattle met pursuant to adjourning in their Council Chamber in the New City Hall: Geo. W. Hall in the Chair. At roll call the following members were present to wit: W. H. Bogardus F.W.D. Holbrook Moses Korn A. S. Miller F. A. Pontius F. W. Wald W. A. Snyder F. N. Wilcox Mr. President. H. W. Miller Clerk

The following proceedings are had to wit: Minutes of the previous meeting read & approved. The matter of public printing laid over from last meeting was called up and sealed proposals from the Post Intelligencer, The Daily Times and the Seattle Buss and daily Telegraph were read and referred to a Special Committee. Appointed by the Chair Messrs Pontius and Wald being such Committee.

The Communications from the Mayor appointing Thos [Galfney?] Port Warden laid over from last meeting was called up and on Motion vote taken: The Name of Thos Gafney was unanimously rejected.

The following Petitions are then read — From B. J. [Angille?] for position of Janitor: read & ordered placed on file.

From Wm & Eliza harmond regarding the Survey of Temperance St. and asking for modification of same. Read & referred to street Inpt Com.

Last edit 12 months ago by Harpwench 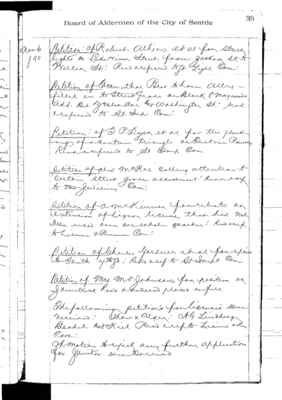 39 Board of Aldermen of the City of Seattle

Petition of A. McKinnon for rebate on extension of Liquor license that had not been used over one whole quarter; Read & ref to License & Revenue Com.

A motion to reject any further applications for Janitor was carried. 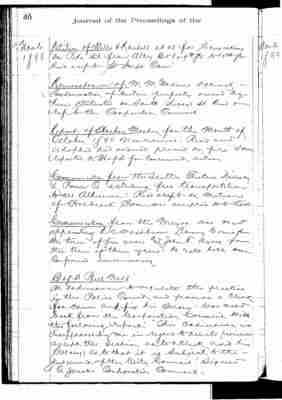 46 Journal of the Proceedings of the

Remonstrance of M. M. McAndrews against condemnation of certain property owned by him situated on South [?] St. Read & ref to the Corporation Council.

Report of Harbor Master for the month of October 1890 was received; Read and adopted and ordered placed on file. Same reports to H of D for concurrent action.

Communication from the Lester Electric Railway & Power Co. extending fire transportation to all Aldermen; Read & ref to a motion of Holbrook Samson accepted with thanks.

Communication from the Mayor was recd appointing R. C. Washburn Library Com's for the term of three years. On vote both were confirmed unanimously.

B of A Bill No. 8 An Ordinance to regulate the practice in the Police Court and provide a Clerk for same and fix his salary was recd back from the Corporation Council with the following report: This Ordinance is disapproved by me in regard to all its provisions except the section as to a clerk and his salary; as to that it is subject to the judgment of the City Council. Signed O. Jacobs Corporation Council. 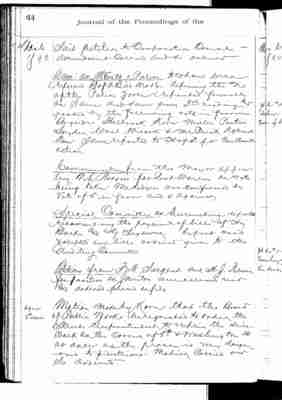 44 Journal of the Proceedings of

Com. on Health & Police to whom was referred B of A Bill No. 16 defining the no. of the Police Forced. Reported favorably on same and same given 3rd reading. Passed by the following vote in favor Bogardus Holbrook Korn Miller Pontius Snyder Wald Wilcox & Mr. Prest. Against none. Same reported to H of D for concurret action.

Communication from the Mayor appointing N. [L?]. Rodgers for Port Warden on vote being taken Mr. Rodgers was confirmed by vote of 5 in favor and 4 against.

Special Committee on furnishing reports recommending the payment of bills of Hy Barke and G. [?]. Report read & adapted and bill ordered given to the Auditing Committee.

Petitions from F. M. Sargent and H. J. Palver for position of Janitor were allowed read and ordered placed on file.

Motion made by Korn that the Board of Public Works be requested to order the Street Superinendent to repair the sidewalk on the corner of 8th & Washington Sts. at once as the place is very dangerous to pedestrians. Motion carried and so ordered. 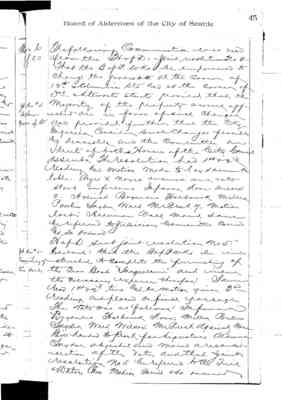 45 Board of Alderman of the City of Seattle

The following communication was recd from the H of D. Joint resolution No. 4. That the B of P. Wks. be enpowered to change the grounds at the corner of 12th & Columbus Sts. and at the corner of 3rd & Stewart Streets provided that the majority of the property owners affected are in favor of such changes. And provided from then that the City Engineer consider such changes feasible and desirable and the Committee on Streets of both Houses of the City Council assent. The resolution had 1st and 2nd reading and motion made to lay same on table. Ayers & Noyes ordered and vote stood as follows: In favor Korn Wilcox 2. Against Bogardus Holbook Miller Pontius Snyder Ward Mr. Prest. 7. Motion lost. Alderman Ward moved same be referred to Judiciary Committe. Carried and so ordered.

H of D sent joint resolution #5. Resolved: that the B of P wks be instructed to complete the furnishing of the Fire Boat ["?"] and incur the necessary expense therefor. Same read 1st and 2nd time and motion given. 3rd reading an placed on final passage. The vote was as follows: In favor Bogardus Holbrook Korn Miller Pointius Snyder Wald Wilcox Mr. Prest. Against None. Bill handed to Prest. for signature. Alderman Snyder objected and moved a recalculation of the vote, and that Joint resolution No. 5 be referred to the Fire & Wager Com. Motion carried and so ordered.

Last edit 10 months ago by Harpwench 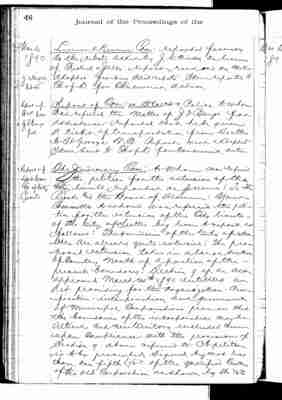 48 Journal of the Proceedings of the

Report of Com on Health & Police to whom was referred the matter of J. F. [Bangs?] for assistance reported that he be given a ticket of transportation from Seattle to St. George [N.B.?]. Report read & adopted. Same sent to H of D for concurrent action.

Last edit 9 months ago by Harpwench 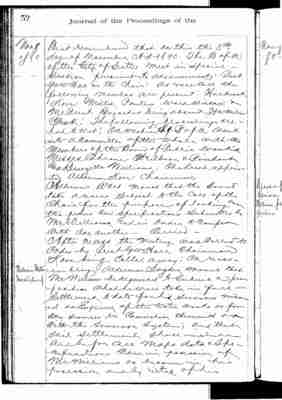 Journal of the Proceedings of the

Be it remembered that on this the 8th day of November A. D. 1890 The B of A of the City of Seattle meet in special session pursuant to [adjournment?]. Prest. Geo W. Hall in the chair. At roll call the following members are present: Holbrook Korn Miller Pontius Ward Wilcox & Mr. Prest. Bogardus being absentH. W. Miller Clerk: The following proceedings are had to wit: On motion of B of A went into a committee of the whole with the members of the Board of Public Works Messrs Cohrane, Heilbron & Reinhart and Benzette Williams. The Prest appointed Alderman Korn Chairman.

Alderman Ward moved that the Board take a recess subject to the call of the Chair for the purpose of looking over the plans and specifications submitted by Mr. Williams and in order to confer with one another - carried.

After recess the Meeting was called to order by Prest Geo Hall Chairman Korn being called away: on reassembling Alderman Snyder moved that Mr. Williams be requested to submit a proposition what he will take in full settlement to date for his services needed as Engineer of the Water Works or for any services in connection therewith on with the Sewerage System; and that said settlement shall include and be for all maps data & Specifications now in possesion of Mr. Willis on became in his possesion and by virtue of his

Last edit 8 months ago by Harpwench 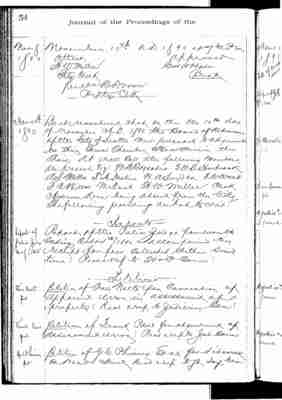 54 Journal of the Proceedings of the

Be it remembered that on this the 10th day of November A.D. 1890 the Board of Aldermen of the City of Seattle met pursuant to adjounment in their Council Chamber Geo W Hall in the Chair. At roll call the following Members are present. Viz: MH Bogardus TW Halbrook A.S. Miller T. A.Pantius W. A. Snyder. T. W Wald F.N.Willox Mr Rust H.W. Miller Clerk Alderman Korn being absent from the City the following proceeding are had to wit: 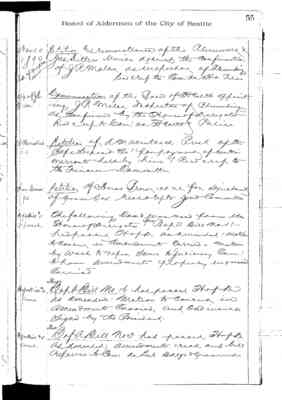 Board of Aldermen of the City of Seattle 55

Rem of Gasfitters Union Petition and remonstrance of the Plummers & Gas Fitters Union against the confirmation of JR Malan as inspector of Plumbing Read & ref to Com: on H & Police

App of J.R. Malan Communication of the Board of Health appointing JRMalan Inspector of Plumbing as confirmed by the House of Delegates Read & ref to Comm: on Health & Police

A Macintosh Petition of A Macintosch Prest of the Safe Deposit Co. : for payment of certain warrants held by him : Read & ref to the Finance Committee

B of A Bill #11 referred The following Com's was recd from the House of Delegates that B of A Bill No 11 had passed H of D as amended : motion to concur in amendment carried - motion by Wald to refer same to Judiciary Com : to have amendment properly engrossed carried

B of A Bill #16 passed That B of A Bill No 16 had passed H of D as amended : motion to concur in amendment carried, and one issuance signed by the President. 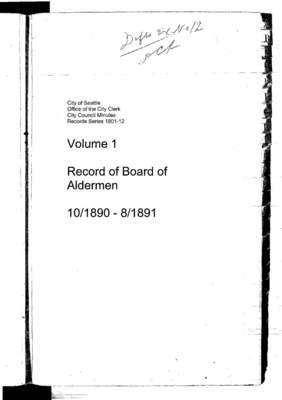 Record of Board of Aldermen