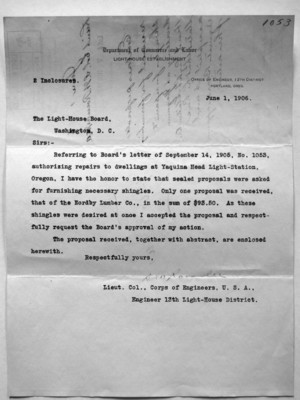 Sirs:- Referring to Board's letter of September 14, 1905, No. 1053, authorizing repairs to dwellings at Yaquina Head Light-Station, Oregon. I have the honor to state that sealed proposals were asked for furnishing necessary shingles. Only one proposal was received, that of the Nordby Lumber Co., in the sum of $95.50. As these shingles were desired at once I accepted the proposal and respectfully request the Board's approval of my action. The proposal received, together with abstract, are enlosed herewith. 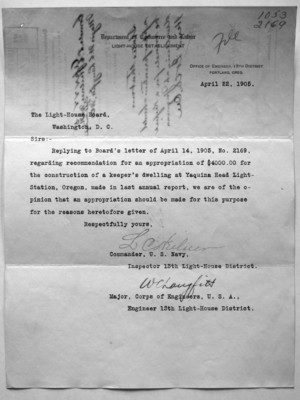 Sirs:- Replying to Board's letter of April 14, 1905, No.2169, regarding recommendation for an appropriation of $4000.00 for the construction of a keeper's dwelling at Yaquina Head Light-Station, Oregon, made in last annual report, we are of the opinion that an appropriation should be made for this purpose for the reasons heretofore given. 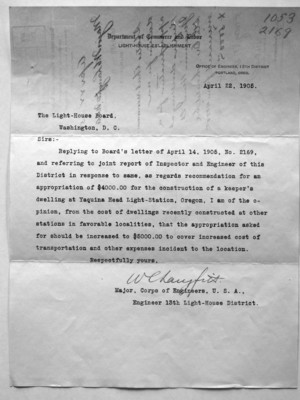 Sirs:- Replying to Board's letter of April 14, 1905, No. 2169, and referring to joint report of Inspector and Engineer of this District in response to same, as regards for an recommendation for an appropriation of $4000.00 for the construction of of a keeper's dwelling at Yaquina Head Light- Station, Oregon, I am of the opinion, from the cost of dwellings recently constructed at other stations in favorable localities, that the appropriation asked for should be increased to $5000.00 to cover increased cost of transportation and other expenses incident to the location. 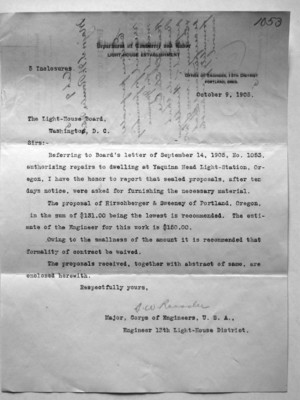 Sirs:- Referring to Board's letter of September 14, 1905, No. 1053, authorizing repairs to dwelling at Yaquina Head Light-Station, Oregon, I have the honor to report that sealed proposals, after ten days notice, were asked for furnishing the necessary material. The proposal of Hirschberger & Sweeney of Portland, Oregon, in the sum of $131.00 being the lowest is recommended. Thte estimate of the Engineer for this work is $150.00. Owing to the smallness of the amount it is recommended that formality of contract be waived. The proposals received, together with abstract of same, are enclosed herewith. 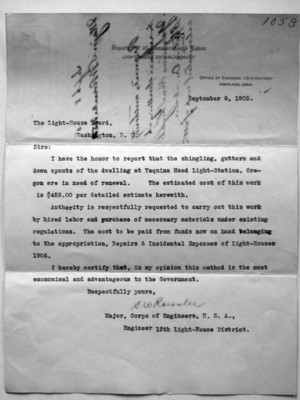 Sirs: I have the honor to report that the shingling, gutters and down spouts of the dwelling at Yaquina Head Light-Station, Oregon are in need of renewal. The estimated cost of this work is $455.00 per detailed estimate herewith. Authority is respectfully requested to carry out this work by hired labor and purchase of necessary materials under existing regulations. The cost to be paid from funds now on hand belonging to the appropriation, Repairs & Incidental Expenses of Light-Houses 1906. I hereby certify that, in my opinion this method is the most economical and advantageous to the Government. 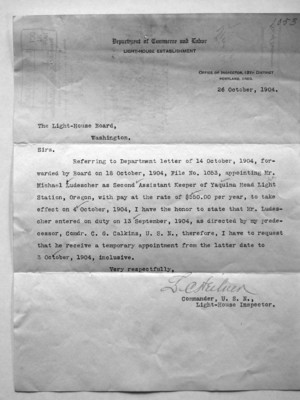 Deparment of Commerce and LaborLIGHT-HOUSE ESTABLISHMENT

Sirs.Referring to Department letter of 14 October, 1904, forwarded by Board on 18 October, 1904, File No. 1053, appointing Mr. Michael Ludescher as Second Assistant Keeper of Yaquina Head Light Station, Oregon, with pay at the rate of $550.00 per year, to take effect on 4 October, 1904, I have the honor to state that Mr. Ludescher entered duty on 13 September, 1904, as directed by my predecessor, Comdr. C. G. Calkins, U.S.N., therefore, I have to request that he receive a temporary appointment from the latter date to 3 October, 1904, inclusive.

Last edit about 1 year ago by caroleholmson 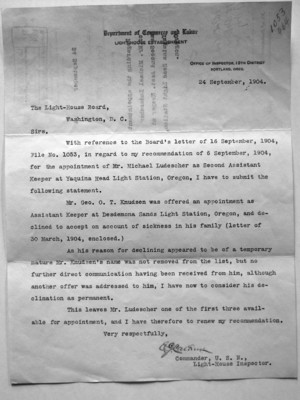 Sirs. With reference to the Board's letter of 16 September, 1904, File No. 1053, in regard to my recommendatiom of 6 September, 1904, for the appointment of Mr. Michael Ludescher as Second Assistant Keeper at Yaquina Head Light Station, Oregon, I have to submit the following statement. Mr. Geo. O. T. Knudsen was offered an appointment as Assistant Keeper at Desdemona Sands Light Station, Oregon, and declined to accept on account of sickness in his family (letter of 30 March, 1904, enclosed.) As his reason for declining appeared to be of a temporary nature Mr. Knudsens's name was not removed from the list, but no further direct communication having been received from him, although another offer was addressed to him, I have now to consider his declination as permanent. This leaves Mr. Ludescher one of the first three available for appointment, and I have therefore to renew my recommendation. 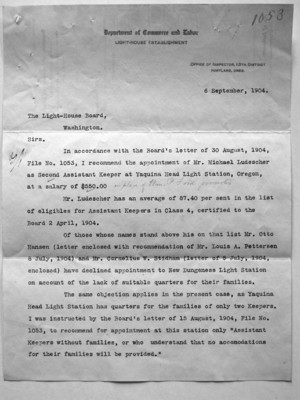 The Light-House Board, Washington.

Sirs. In accordance with the Board's letter of 30 August, 1904, File No. 1053, I recommend the appointment of Mr. Michael Ludescher as Second Assistant Keeper at Yaquina Head Light Station, Oregon, at a salary of $550.00 Mr. Ludescher has an average of 87.40 per sent in the list of eligibles for Assistant Keepers in Class 4, certified to the Board 2 April, 1904. Of those whose names stand above his on that list Mr. Otto Hansen (letter enclosed with recommendation of Mr. Cornelius W. Stidham (letter of 5 July, 1904, enclosed) have declined appointment to New Dungeness Light Station on account of the lack of suitable quarters for their families. THe same objection applies in the present case, as Yaquina Head Light Station has quarters for the families of only two Keepers. I was instructed br the Board's letter of 15 August, 1904, File No. 1053, to recommend for appointment at this station only "Assistant Keepers without families, or who understand that no accomodations for their families will be provided." 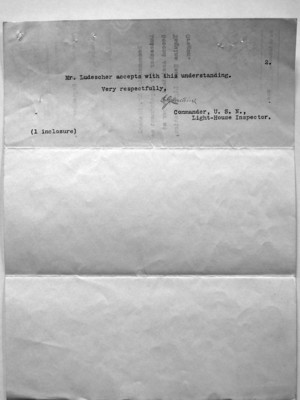 Mr. Ludescher accepts with this understanding. 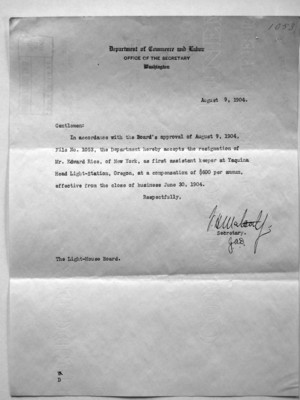 Department of Commerce and Labor Office Of The Secretary Washington

In accordance with the Board's approval of August 9, 1904, File No. 1053, the Department hereby accepts the resignation of Mr. Edward Rice, of New York, as first assistant keeper at Yaquina Head Light-Station, Oregon, at a compensation of $600 per annum, effective from the close of busness June 30, 1904.