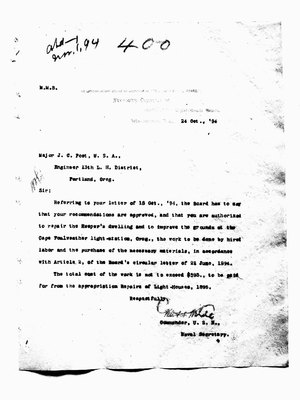 Sir: Referring to your letter of 18 Oct., '94, the Board has to say that your recommendations are approved, and that you are authorized to repair the Keeper's dwelling and to improve the grounds the Cape Foulweather light station, Oreg., the work to be done by hired labor and the purchase of the necessary materials, in accordance with Article 2, of the Board's circular letter of 22 June, 1894.

The total cost of the work is not to exceed $595., to be paid for from the appropriation Repairs of Light-Houses, 1895.

Last edit over 3 years ago by Friends of Yaquina Lighthouses

Sir: The Board, at its session on 5 Nov., '94, decided to establish beacon lights at Yaquina Bay, Oreg.

The Board requests you to take the proper measures for the establishment of inexpensive beacon Lights at Yaquina Bay, at a cost not to exceed $300., to be paid for from the appropriation, Repairs of Light-Houses.

The Board has requested the Inspector of the District to take the proper measures for employing a laborer to act as keeper, at not more than $10. per month, each. 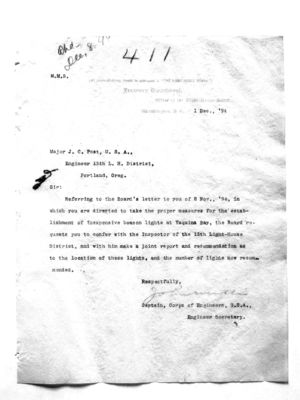 Sir: Referring to the Board's letter to you of 8 Nov., '94. in which you are directed to take the proper measures for the establishment of inexpensive beacon lights at Yaquina Bay, the Board requests you to confer with the Inspector of the 13th Light-House District, and with him make a joint report and recommendation as to the location of these lights, and the number of lights now recommended. 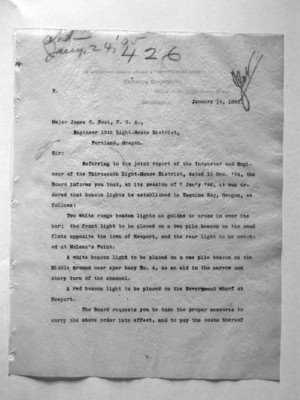 Sir: Referring to the joint report of the Inspector and Engineer of the Thirteenth Light-House District, dated 13 Dec. '94, the Board informs you that, as its session of 7 Jan'y '95, it was ordered that beacon lights be established in Yaquina Bay, Oregon, as follows:

Two white range beacon as guides to cross in over the bar; the front light to be placed on a two pile beacon on the sand flats opposite the town of Newport, and the rear light to be erected at McLean's Point.

A white beacon light to be placed on a one pile beacon on the Middle Ground near spar buoy No. 4, as an aid in the narrow and sharp turn of the channel.

A red beacon light to be placed on the Government wharf at Newport.

The Board requests you to take the proper measures to carry the above order into effect, and to pay the costs thereof 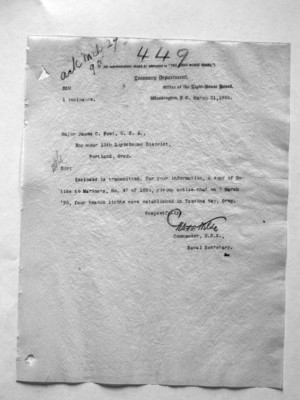 (All communications should be addressed to "THE LIGHT-HOUSE BOARD.")

ESH Office of the Light-House Board,

Sir: Inclosed is transmitted, for your information, a copy of Notice to Mariners, No. 47 of 1895, giving notice that on 7 March '95, four beacon lights were established in Yaquina Bay, Oreg.

Show pages that mention J.C. Post in all works