Thomas P. Martin (1846-1910) was born on Albemarle Plantation in Assumption Parish, Louisiana. During the Civil War, he served in Company C of the 26th Louisiana Regiment. In 1865, Thomas Martin married Cornelia M. Taylor. Mr. Martin arrived in Fort Worth, Texas during the early 1890s, where he served as a director for Merchants National Bank. He also worked as an attorney, a notary public, a real estate broker, and a financier. In 1896, he was assigned as a deputy clerk in the United States District Court, Northern District of Texas, Fifth Circuit of Appeals. His wife, Cornelia, died that same year. Thomas married a second time, when he wed Mary E. Ferree, in 1897. While in Fort Worth, he resided at 304 Florence Street and was a member of the United Confederate Veterans. On January 13, 1900, Thomas Martin resigned from the federal court. By 1901, he had moved to Beaumont, Texas and in 1903, he was practicing law in El Paso, Texas with frequent trips to Mexico City. The diary in this collection was written in 1897, during his time in Fort Worth. Provided are the first 200 pages of this diary. 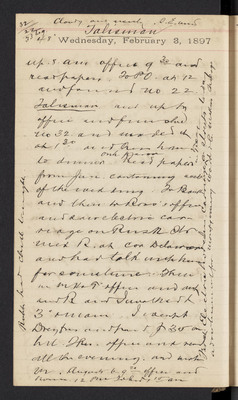 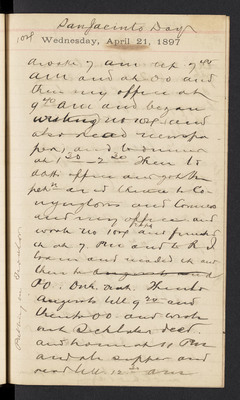