Eugene Coolidge Houghton was born March 11, 1844, the son of Robert Coolidge Houghton and Lucy Taylor Forbush Houghton. His hometown was Stow, Massachusetts. During the Civil War, he left Phillips Academy to serve in the 2nd Heavy Artillery Battery C Massachusetts and was promoted to Colonel. After graduating from Phillips Academy in 1863, he is listed in alumni records as a clerk, credit man in the grain business; as president of the H.W. Bigelow (woolen) Company; and, after 1895, as a conductor on the Lawrence Street Rail Road. Houghton died in May 1919 in North Andover, Massachusetts. According to an article in the Tri-State Tourist, he was “A Conductor Famed for Courtesy.” 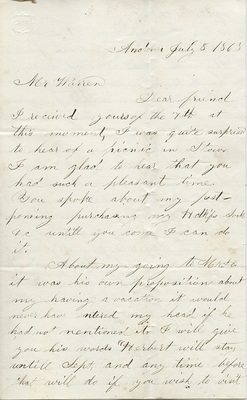 Help us transcribe letters home from Andover students in the past, papers of the founding Phillips family, and documents from other archival collections