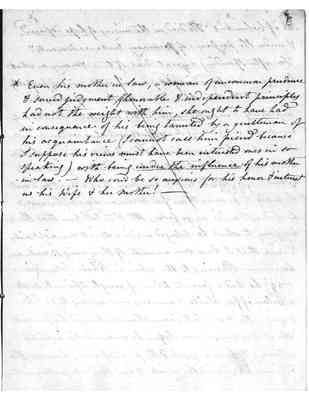 * Even his mother in law, a woman of uncommon prudeence of sound judgment, of honorable + independent principles had not the weight with him, she ought to have had in consequence of his being taunted by a gentleman of his acquaintance (I cannot call him friend because I suppose his views must have been interested ones in so speaking) with being under the influence of his mother -in-law. -- Who could be so anxious for his honor + interest as his Wife + her mother! -- 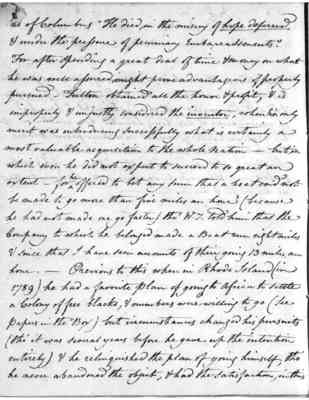 as of Columbus "He died in the misery of [hope deferred (underlined)] and under the pressure of pecuniary Embarrassments." For after spending a great deal of time & money on what he was well assured might prove advantageous if properly pursued. Fulton obtained all the honor & profit, & is improperly & unjustly considered the [inocutor? (underlined)], when his only merit was introducing successfully what is certainly a most valuable acquisition to the whole Nation - but in which even he did not expect to succeed to so great an extent - for ^he offered to bet any sum that a boat { ?} not be made to go more than five miles an hour [x] (because he had not made one go faster) tho' W. J. told him that the Company to which he belonged made a Boat run eight miles and since that I have seen accounts of their going 13 miles an hour. - Previous to this where in Rhode Island (in 1789) he had a favorite plan of going to Africa to settle a Colony of free blacks, and numbers were willing to go (See Papers on the Box) but circumstances changed his pursuits (tho' it was several years before he gave up the intention entirely) & he relinquished the plan of going himself, tho' he never abandonded the object, and had the satisfaction in this 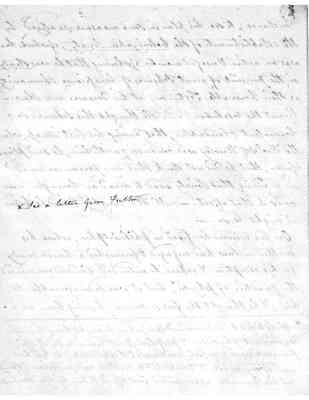 x See a letter from Fulton 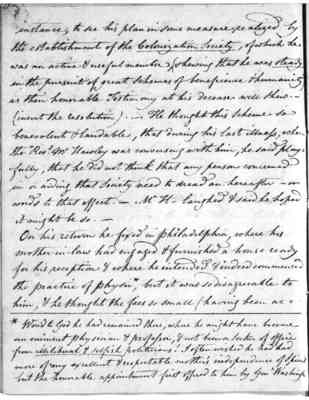 instance, to see his plan in some measure realized by the establishment of the Colonization Society of which he was an active & useful member, (shewing that he was steady in the pursuit of great Schemes of beneficence & humanity,) as their honorable Testimony at his decease will shew. (insert the resolution). - He thought this Scheme so benevolent & laudable, that during his last illness, when the Revd. Mr. Hawley was conversing with him, he said playfully, that he did not think that any person concerned in or aiding that Society need to dread an hereafter - or words to that effect. - Mr. H- laughed & said he hoped it might be so. -

On his return he fixed in Philadelphia, where his Mother-in-law had engaged & furnished a house ready for his reception & where he intended & indeed commenced the practice of physic*, but it was so disagreeable to him, & he thought the fees so small (having been ac=

*Wou'd to God had he remained there, where he might have become an eminent Physician & professor, & not been a Seeker of Office from [inhabitual?] & selfish proliterations! I often wished he had had more of my excellent & respectable mother's independence of Spirit but the honorable appointment first offered to him by Genl. Washington 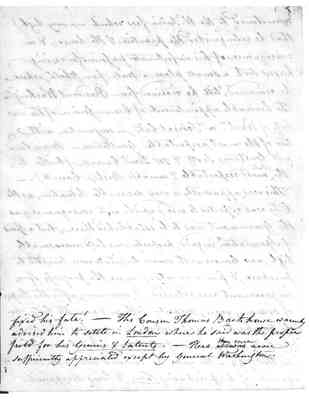 fixed his fate! - This Cousin Thomas Backhouse warmly advised him to settle in London where he said was the proper field for his Genius & talents. - Here they were never sufficiently appreciated except by General Washington.