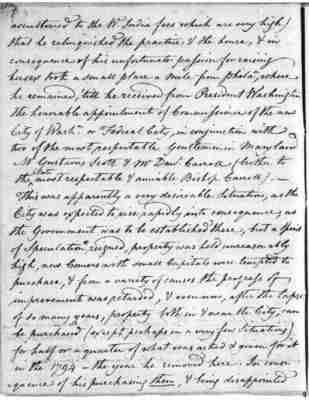 accustomed to the W. India fees which are very high) that he relinquished the practice & the house, & in consequence of his unfortunate passion for raising horses took a small place a mile from Phila, where he remained, 'till he received from President Washington the honorable appointment of Commissioner of the new City of Washn. or Federal City, in conjunction with two of the most respectable Gentlemen in Maryland Mr Gustavus Scott & Mr Danl. Carroll (brother to the late most respectable & amiable Bishop Caroll)..This was apparently a very desireable Situation, as the City was expected to rise rapidly into consequence, as the Government was to be established there, but a spirit of Speculation* resigned, property was held unreasonably high, new Comers with small Capitals were tempted to purchase, & from a variety of causes the progress of improvement was retarded, & even now, after the lapse of so many years, property both in & near the City, can be purchased (except perhaps in a very few Situations) for half or a quarter of what was asked & given for it in the 1794- the year he removed here. In conse =qence of his purchasing then, & being disappointed 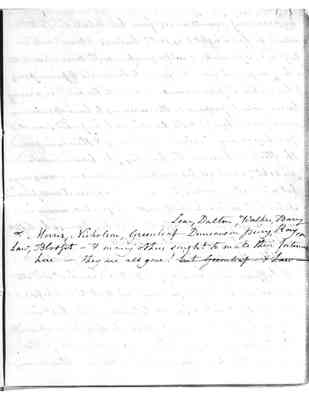 Lear, Dalton, Walter Barry *Morris, Nicholson, Greeleaf - Duncous in piety Ray Law, Blodget - & many others sought to make their fortunes here - they are all gone! but Greenleaf - & Law - 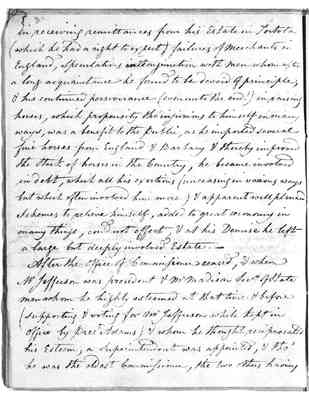 in receiving remittances from his Estate in [Tortuga?] (which he had a right to expect,) failures of Merchants in England, Speculations in conjunction with men whom after a long acquaintance he found to be devoid of principle, & his continued perserverance (even unto the end!) in raising horses, which propensity tho' injurious to himself in many ways; was a benefit to the public, as he imported several fine horses from England & Barbary & thereby improved the Stock of horses in the Country, he became involved in debt, which all his exertions (unceasing in various ways but which often involved him more) & apparent well planned Schemes to relieve himself, added to great economy in many things, could not effect, & at his Demise he left a large but deeply involved Estate. -

After the Office of Commissioner ceased, & when Mr Jefferson was president & Mr Madison Secy of State men whom he highly esteemed at that time & before (supporting & voting for Mr Jefferson while kept in Office by Prest Adams) & whom he thought reciprocated his Esteem, a Superintendent was appointed, & tho' he was the oldest Commissioner, the two others having 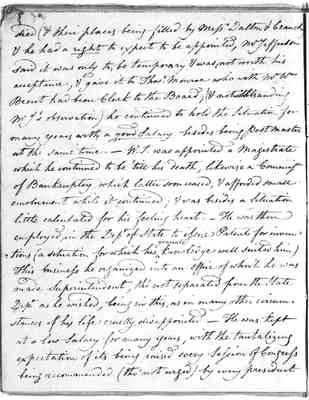 died (& their places being filled by Messrs Dalton & Cranch) & he had a right to expect to be appointed, Mr Jefferson said it was only to be temporary & was not worth his acceptance, & gave it to Thos. Monroe who with Mr Wm Brent had been Clerk to the Board; (& notwithstanding Mr J's observation) he continued to hold the situation for many years with a good Salary besides being Post Master at the same time. - W. J. was appointed a Magistrate which he continued to be 'till his death, likewise a Commisr of Bankruptcy, which latter soon ceased, & afforded small emolument while it continued; & was besides a Situation little calculated for his feeling heart. - He was then employed in the Dept of State to issue Patents for inven= =tions (a situation for which his general knowledge well suited him) This business he organized into an Office of which he was made Superintendent, tho' not separated from the State Dept. as he wished, being in this, as in many other circum= stances of his life cruelly disappointed - He was kept at a low Salary for many years, with the tantalizing expectation of its being raised every Session of Congress being recommended (tho' not urged) by every president 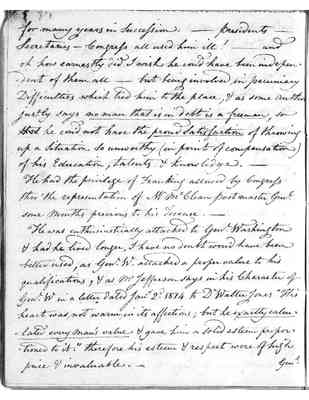 for many years in Succession----presidents--Secretaries----Congress all used him ill!---and oh how earnestly did I wish he could have been independent of them all---but being involved in pecuniary Difficulties which tied him to the place, and as some authors justly says no man that is in debt is a freeman, so he could not have the proud Satisfaction of throwing up a Situation so unworthy( in point of compensation) of his Education, talents and knowledge. He had the privilege of Franking allowed by Congress thro' the representation of W McClean postmaster Gen. some months previous ot his decease. He was enthusiastically attached to Gen Washington and had he lived longer, I have no doubt would have been better used, as Ge. W. attached a proper value to his qualifications, and as Mr Jefferson says in his Character of Gen W in a letter dated Jan 2nd 1874 to Dr Walter Jones "His heart was not warm in its affections; but he exactly calulated every man's value and gave him a solid esteem proportioned to it." therefore his esteem and respect were of high price and invaluable.