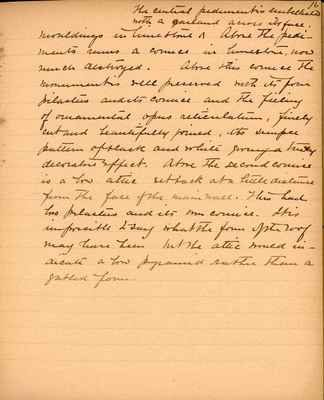 mouldings in limestone. ^The central pediment is embellished with a garland across its face.^ Above the pediments runs a cornice in limestone, now much destroyed. Above the cornice the monument is well preserved with its four pilasters and its cornice and the feeling?? of ornamental opus reticulatum, finely cut and beautifully joined, its simple pattern of black and white giving a nicely decorative effect. Above the second cornice is a low attic set back at a little distance from the face of the main hall. This had two pilasters and its own cornice. It is impossible to say what the form of the roof may have been but the attic would indicate a low pyramid rather than a gabled form. 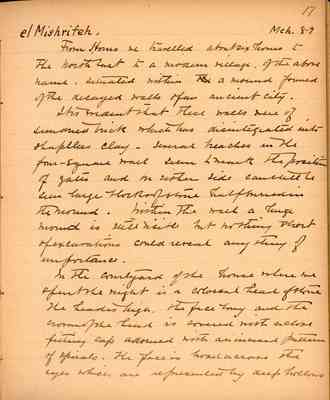 From Homs we travelled about six hours to the northeast to a modern village, of the above name, situated within a mound formed of the decayed walls of an ancient city,

It is evident that these walls were of sundried brick which has disintegrated into shapeless clay - several ?? in the four-square wall seem to mark the position of gates, and on either side can still be seen large blocks of stone half buried in the mound. Within the wall a huge mound is still visible but nothing short of excavations could reveal anything of importance. In the courtyard of the house where we spent the night is a colossal head of stone The head is high, the face long and the crown of the head is covered with a close fitting cap adorned with an incised pattern of spirals. The face is broad?? across the eyes which are represented by deep hollows 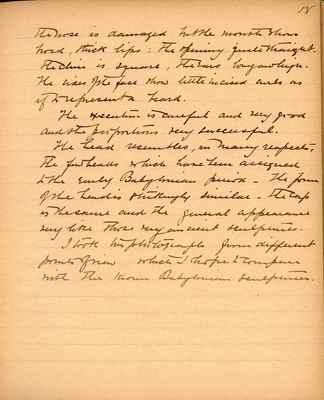 the nose is damaged but the mouth shows broad thick lips. The opening quite straight. The chin is square, the ears long and high. The side of the face show little incised curls as if to represent a beard.

The execution is careful and very good and the proportions very successful.

The head resembles, in many respects, the few heads which have been assigned to the early Babylonian period - the form of the head is strikingly similar. The cap is the same the general appearance very like those very ancient sculptures.

I took two photographs from different points of view which I hope to compare with known Babylonian sculptures. 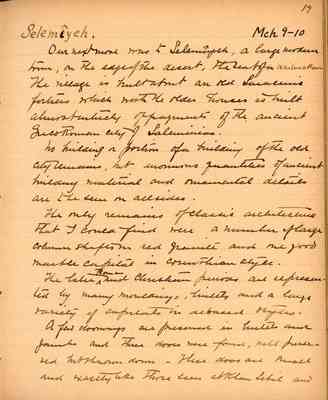 Our next move was to Selemîyeh, a large modern town, on the edge of the desert, the seat of a ?? The village is built about an old Saracenic fortress which with the older houses is built almost entirely of fragments of the ancient Greco-Roman city of Saleminicus??

No building or portion of a building of the old city remains, but enormous quantities of ancient building material and ornamental details are to be seen on all sides.

The only remains of classic architecture that I could find were a number of large column shafts in red granite and one good marble capital in Corinthian style.

The later Roman and Christian periods are represented by many mouldings, lintels, and a large variety of capitals in debased styles.

A few doorways are preserved in lintels and jambs and three doors were found, well-preserved but thrown down. These doors are small and exactly like those seen at Khan Sebil and 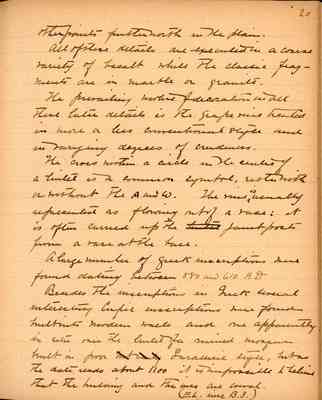 other points further north in the plain.

All of these details are executed in a coarse variety of basalt while the classic fragments are in marble or granite.

The prevailing method of decoration in all these later details is the grapevine treated in more or less conventional style and in varying degrees of crudeness.

The cross within a circle in the centre of a lintel is a common symbol, either with or without the A and W. The vine is usually represented as flowing out of a vase; it is often carried up the jamb posts from a vase at the base.

A large number of Greek inscriptions were found dating between 580 and 610 AD. Besides the inscriptions in Greek several interesting Cufic?? inscriptions were found built into modern walls and one apparently in situ over the lintel of a ruined mosque built in poor Saracenic style, but as the date reads about 1100 it is impossible to believe that the building and the insc are ?? (E.L. insc B.3.)