Jeremiah Burke Sanderson (1821-1875) was born in New Bedford, Massachusetts. He began his abolitionist work at age 19 as secretary of the New Bedford Colored Citizens, and was associated with many leading abolitionists of the time. Moving to California in 1854 with the intention of making enough money to return home to his family, he quickly became an activist for African-American rights. Sanderson became secretary of the first California Colored Convention, and worked closely with Peter Anderson, editor of "Pacific Appeal." He was a strong advocate of education, and established schools for black children in Sacramento, San Francisco, and Stockton. In addition to his work in education, Sanderson also worked to ensure equal rights for African-Americans in California. Sanderson died in a train accident in August 1875 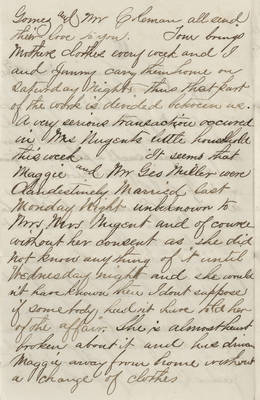 Manuscript collection consisting of letters, documents, a journal, photographs, and other ephemera pertaining to Jeremiah Burke Sanderson and his family. Some of the letters were written by Mary Sanderson Grases (sometimes spelled Grasses), his daughter and the first black public school teacher...