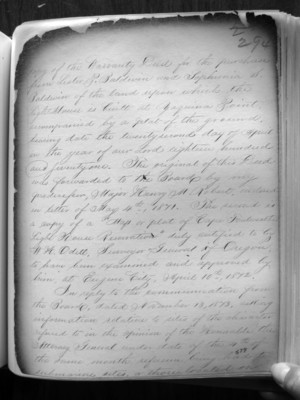 Copy of the Warranty Deed for the purchase from Lester P. Baldwin and Sophronia S. Baldwin of the land upon which the light house is built at Yaquina Point accompanied by a plat of the ground bearing date the twenty second day of April in the year of our Lord eighteen hundred and seventy one. The original of this Deed was forwarded to the Board by my predecessor, Major Henry M Robert, enclosed in letter of May 4th, 1871. The second is a copy of a “Map of plat of Cape Foulweather Light House Reservation” duty certified to by WH Odell, Surveyor General of Oregon to have been examined and approved by him, at Eugene City, April 20th, 1872. In reply to the communication from the Board, dated November 13, 1873, assisting information relative to sites of the character referred to in the opinion of the Honorable the Attorney General under date of the 4th of the same month reference being had to submarine sites, or those located on 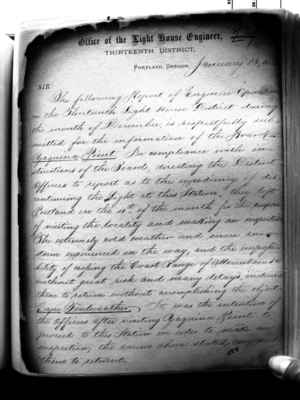 SIR: The following Report of Engineer Operations in the Thirteenth Light House District during the month of December, is respectfully submitted for the information of the Board. Yaquina Point. In compliance with instructions of the Board, directing the District Officers to report as the expediency of discontinuing the Light at this Station, they left Portland on the 4th of the this month for the purpose of visiting the locality and making an inspection. The extremely cold weather and severe snow storm experienced on the way, and the impossibility of cropping the Coast Ranger of Mountains without great risk and many delays, induced them to return without accomplishing the object. Cape Foulweather. It was the intention of the Officers after visiting Yaquina Point to proceed to this Station in order to make an inspection; the causes above stated compelled them to return. 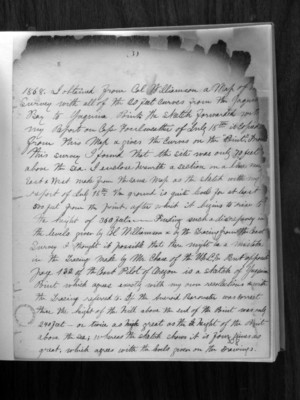 1868. I obtained from Col. Williamson a map of the survey with all of the 20 feet curves from the Yaquina Bay to Yaquina Point. The sketch forwarded with my report on Cape Foulweather of July 18th is copied from this map and gives the curves on the "Point". From this survey I found that the site was only 70 feet above the sea. I enclose herewith a section on a line near East and West made from the same map as the sketch with my report of July 18th. The ground is quite level for at least 500 feet from the point, after which it begins to rise to the height of 360 feet. Finding such a discrepancy in the levels given by Col. Williamson and by the tracing from the Coast Survey I thought it possible that there might be a mistake in the tracing made by Mr. Chase of the U.S.C.S. but opposite page 132 of the Coast Pilot of Oregon is a sketch of Yaquina Point which agrees exactly with my own recollections which the tracing referred to. If the aneroid barometer was correct the height of the hill above the end of the Point was only 240 feet - or twice as great as the height of the Point above the sea; whereas the sketch shows it is four times as great, which agrees with the levels given on the drawings.

Last edit over 1 year ago by DReade 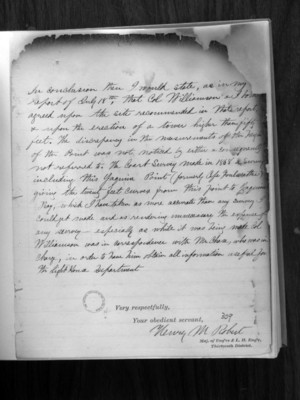 In conclusion then I would state, as in my report of July 18th, that Col. Williamson and I have agreed upon the site recommended in that report and upon the erection of a tower higher than fifty feet. The discrepancy in the measurements of the height of the point was not noticed by either and consequently not referred to. The Coast Survey made in 1868, a survey including Yaquina Point (formerly Cape Foulweather) giving the twenty feet curves from this point to Yaquina Bay, which I have taken as more accurate than any survey I could get made and as rendering unnecessary the expense of any survey - especially as while it being made Col. Williamson was in correspondence with Mr. Chase, who was in charge, in order to have him obtain all information useful for the Light House Department.

Last edit over 1 year ago by DReade 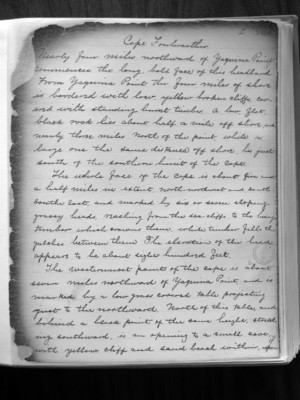 Cape Foulweather Nearly four miles northward of Yaquina Point commences the long, bold face of this headland. From Yaquina Point the four miles of shore is bordered with low, yellow broken cliffs, covered with standing burnt timber. A low flat black rock lies about half a mile off shore and nearly three miles north of the point, while a large one the same distance off shore, lies just south of the southern limit of the cape

The whole face of the Cape is about five and a half miles in extent, North-northwest and south-southeast, and marked by six or seven sloping grassy heads, reaching from the sea-cliffs to the heavy timber which growes there, while timber fills the gulches between them. The elevation of the head appears to be about eight Hundred feet.

The westernmost point of the cape is about seven miles northward of Yaquina Point, and is marked by a low grass covered table projecting just to the northward. North of this table, and behind a black point of the same height, stretching southward, is an opening to a small cave with yellow cliff and sand beach within, upon

Show pages that mention Yaquina Point in all works