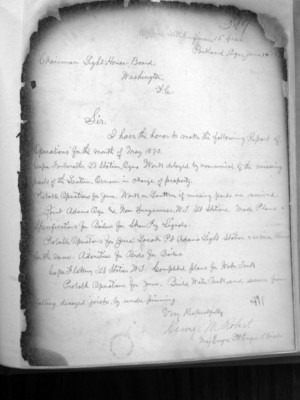 Sir: I have honor to make the following Report of Operations for the month of May 1873. 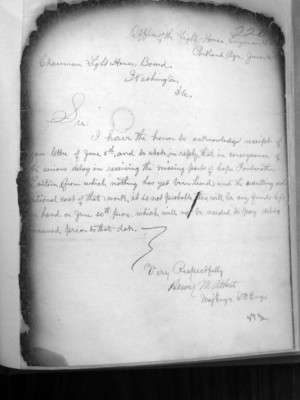 Sir: I have the honor to acknowledge receipt of your letter of June 5th, and to state in reply, that in consequence of the serious delay in receiving the missing parts of Cape Foulweather Lantern, from which nothing has yet been heard, and the resulting additional cost of that work, it is not probable there will be any funds left on hand on June 30th prior,which will not be needed to pay debt incurred prior to that date. 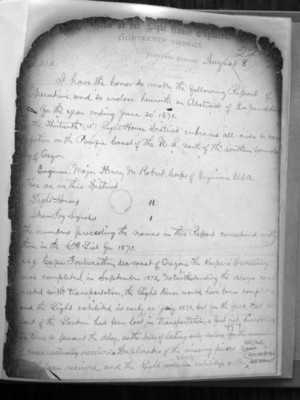 Sir: I have the honor to make the following Report of Operations and to enclose herewith an Abstract of Expenditures for the year ending June 30" 1873. The Thirteenth(13") Light-House District embraces all aids to navigation on the Pacific Coast of the U.S., north of the southern boundary of Oregon. Engineer. Major Henry M Robert, Corps of Engineers, USA.

The numbers preceding the names in this Report correspond with those in the LH List for 1873.

446. Cape Foulweather, Sea-coast of Oregon. The Keepers Dwelling was completed in September 1872. Notwithstanding the delays connected with transportation, the Light House would have been completed and the Light exhibited as early as Jan'y 1873, but for the fact that a part of the Lantern had been lost in transportation: a fact not discovered in time to prevent the delay, as the bill of lading only called for the number of cases actually received. Duplicates of the missing pieces were as ??? been received, and the Light was exhibited on the 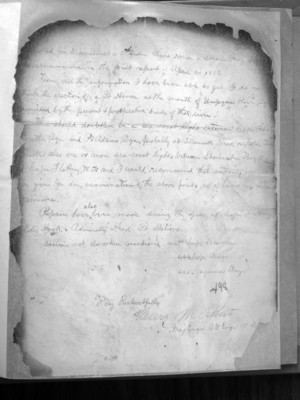 -asked for, to construct a 3rd Order Light House & Steam Fog Light House recommended in the joint report of April 30 1873. From all the information I have been able to get I do not think the erection of a Lt House at the mouth of Umpqua River, Ogn required by the present & prospective trade of that river There should doubtless be a sea-coast light between Cape Foulweather, Ogn and Pt Adams, Ogn, probably at Tillamook Head or False Tillamook: also one or more sea-coast lights, between Shoalwater Bay WT & Cape Flattery, WT: and I would recommend that authority & ??? be given for an examination of the above points as a basis for future estimates. Repairs have also been made during they year at Cape Flattery, Ediz Hook & Admiralty Head Lt Stations. Stations not else where mentioned are 443 Cape Blanco. 444 Cape Arago. 445 Yaquina Bay.