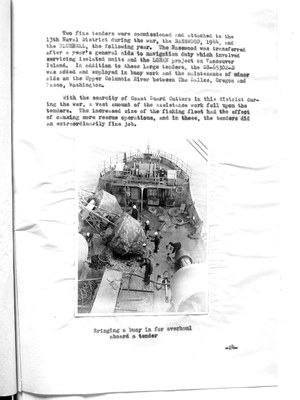 Two fine tenders were commissioned and attached to the 13th Naval District during the war, the BASSWOOD, 1944, and the BLUEBELL, the following year. The Basswood was transferred after a year's general aide to navigation duty which involved servicing the isolated units and the LORAN project on Vancouver Island. In addition to these large tenders, the CO-65302-D was added and employed in buoy work and the maintenance of minor aids on the Upper Columbia River between The Dalles, Oregon and Pasco, Washington.

With the scarcity of Coast Guard Cutters in this district during the war, a vast amount of the assistance work fell upon the tenders. The increased size of the fishing fleet had the effect of causing more rescue operations, and in these, the tenders did an extraordinarily fine job.

Bringing a buoy in for overhaul aboard a tender 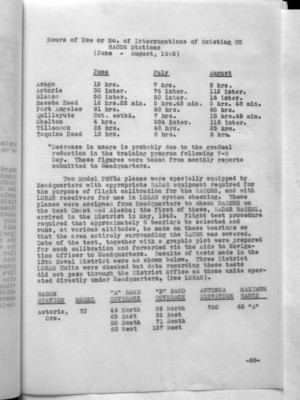 Hours of Use or No. of Interrogations of Existing CORACON Stations(June - August, 1915)

*Decrease in usage is probably due to gradual reduction in the training program following V-EDay. These figures were taken from monthly reportssubmitted to Headquarters.

Two Model PBY5A planes were specially equipped byHeadquarters with appropriate RADAR equipment required forthe purpose of flight calibration for the RACONS, and with LORAN receivers for use in LORAN system checking. Theseplanes were assigned from Headquarters to check RACONS onthe West Coast and Alaska; the first of these, RADAR RACHEL,arrived in the District in May, 1945. Flight test procedurerequired that approimately 8 bearings be selected andruns, at various altitudes, be made on these bearings sothat the area entirely surrounding the RACON was covered.Data of the test, together with a graphic plot were preparedfor each calibration and forwarded via the Aids to Naviga-tion Officer to Headquarters. Results of tests made in the 13th Naval District were as shown below. Three DistrictLORAN Units were checked but data regarding these tests did not pass through the District Office as those units oper-ated directly under Headquarters. (See LORAN).

Last edit over 1 year ago by EarthYake 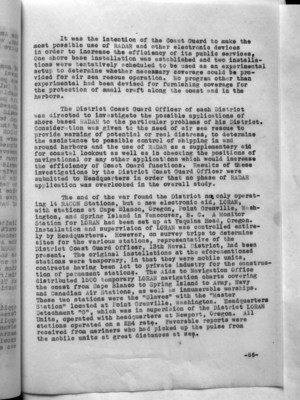 It was the intention of the Coast Guard to make the most possible use of RADAR and other electronic devices in order to increase the efficiency of its public services, One shore base installation was established and two installations were tentatively scheduled to be used as an experimental setup to determine whether necessary coverage could be provided for air sea rescue operation. No program other than experimental had been devised for furnishing coverage for the protection of small craft along the coast and in the harbors.

The District Coast Guard Officer of each District was directed to investigate the possible applications of shore based RADAR to the particular problems of his District. Consideration was given to the need of air sea rescue to provide warning of potential or real distress, to determine the assistance to possible control of shipping in and around harbors and the use of RADAR as a supplementary aid for coastal lookout as well as in checking the positions of navigational or any other applications which would increase the efficiency of Coast Guard functions. Results of these investigations by the District Coast Guard Officers were submitted to Headquarters in order that no phase of RADAR application was overlooked in overall study.

The end of the war found the District not only operating 14 RACON Stations, but a new electronic aid, LORAN, with stations at Cape Blanco, Oregon, Point Grenville, Washington and Spring Island in Vancouver, B.C. A Monitor Station for LORAN had been set up at Yaquina Head, Oregon. Installation and supervision of LORAN was controlled entirely by Headquarters. However, on survey trips to determine sites for the various stations, representative of the District Coast Guard Officer, 13th Naval District, had been present. The original installations at the aforementioned stations were temporary, in that they were mobile units, contracts having been let to private industry for the construction of permanent stations. The aids to Navigation Office distributed 1500 temporary LORAN navigation charts covering the coast from Cape Blanco to Spring Island to Army, Navy and Canadian Air Stations, as well as innumerable warships. These two stations were the "Slaves" with the "Master Station" located at Point Grenville, Washington. Headquarters Detachment "G", which was in supervision of the District LORAN Units, operated with headquarters at Newport, Oregon. All stations operated on a 2H4 rate. Favorable reports were received from mariners who had picked up the pulse from the mobile units at great distances at sea.

Last edit over 2 years ago by JohnnaMiller 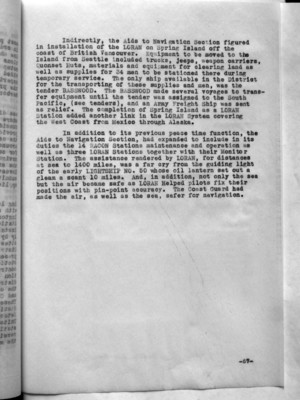 Indirectly, the Aids to Navigation Section figured in installation of the LORAN on Spring Island off the coast of British Vancouver. Equipment to be moved to the Island from Seattle included trucks, jeeps, weapon carriers, Quonset Huts, materials and equipment for clearing land as well as supplies for 34 men to be stationed there during temporary service. The only ship available in the District for the transporting of these supplies and men, was the tender BASSWOOD. The BASSWOOD made several voyages to transfer equipment until the tender was assigned to the South Pacific, (see tenders), and an Army Freight Ship was sent as relief. The completion of Spring Island as a LORAN Station added another link in the LORAN system covering the West Coast from Mexico through Alaska.

In addition to its previous peace time function, the Aids to Navigation Section, had expanded to include in its duties the 14 RACON Stations maintenance and operation as well as three LORAN Stations together with their monitor Station. The assistance rendered by LORAN, for distances at sea to 1400 miles, was a far cry from the guiding light of the early LIGHTSHIP NO. 50 whose oil lantern set out a gleam a scant 10 miles. And, in addition, not only the sea but the air became safe as LORAN Helped pilots fix their positions with pin-point accuracy. The Coast Guard had made the air, as well as the Sea, safer for navigation.

Last edit over 2 years ago by JohnnaMiller 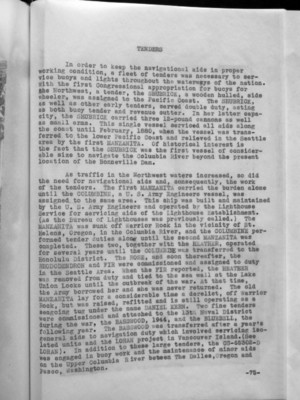 In order to keep the navigational aids in proper working condition, a fleet of tenders was necessary to service buoys and lights throughout the waterways of the nation. With the first Congressional appropriation for buoys for the Northwest, a tender, the SHUBRICK, a wooden hulled, side wheeler, was assigned to the Pacific Coast. The SHUBRICK, as well as other early tenders, served double duty, acting as both buoy tender and revenue outter. In her latter capacity, the SHUBRICK carried 12-pound cannons as well as small arms. This single vessel serviced all aids along the coast until February, 1880, when the vessel was transferred to the lower Pacific Coast and relieved in the Seattle area by the first MANZANITA. Of historical interest is the fact that the SHUBRICK was the first vessel of considerable size to navigate the Columbia River beyond the present location of the Bonneville Dam.

As traffic in the Northwest waters increased, so did the need for navigational aids and, consequently, the work of the tenders. The first MANZANITA carried the burden along until the COLUMBINE, a U.S. Army Engineers vessel, was assigned to the same area. This ship was built and maintained by the U.S. Army Engineers and operated by the Lighthouse Service for servicing aids of the Lighthouse Establishment. ( As the Bureau of Lighthouses was previously called.) The MANZANITA was sunk off Warrior Rock in the vicinity of St. Helens, Oregon, in the Columbia River, and the COLUMBINE performed tender duties alone until the second MANZANITA was completed. These two, together with the HEATHER, operated for several years until the COLUMBINE was transferred to the Honolulu District. The ROSE, and soon thereafter, the RHODODENDRON and FIR were commissioned and assigned to duty in the Seattle Area. When the FIR reported, the HEATHER was removed from duty and tied to the sea wall at the Lake Union Locks until the outbreak of the war. At that time, the Army borrowed her and she was never returned. The old MANZANITA lay for a considerable time a derelict, off Warrior Rock, but was raised, refitted and is still operating as a seagoing tug under the name DANIEL KERN. Two fine tenders were commissioned and attached to the 13th Naval District during the war, the BASSWOOD, 1944, and the BLUEBELL, the following year. The BASSWOOD was transferred after a year's general aids to navigation duty which involved servicing isolated units and the LORAN project in Vancouver Island. ( See LORAN). In addition to these large tenders, the CG-65302-D was engaged in buoy work and the maintenance of minor aids on the Upper Columbia River between the Dalles, Oregon and Pasco, Washington.

Last edit about 1 year ago by Jerika
All 5 records

Show pages that mention LORAN in all works