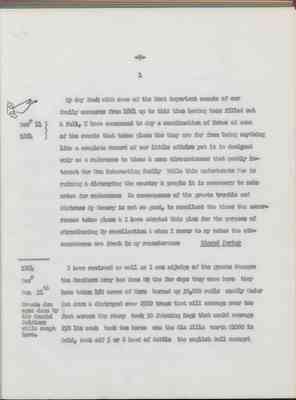 Decr 11) 1864 ) My day Book with some of the Most important events of our family concerns from 1861 up to this time having been filled out & full, I have commenced to day a continuation of Notes of some of the events that takes place tho they are far from being anything like a complete record of our little affairs yet it is designed only as a reference to times and some circumstances that mostly interest Our Own interesting family While this unfortunate War is ruining and distroying the country & people it is necessary to make notes for references In consequence of the greate trouble and distress My Memory is not so good, to recollect the times the occurences takes place & I have adopted this plan for the purpose of strenthening My recollection & when I recur to my notes the circumstances are fresh in my rememberence Nimrod Porter

I have reviewed as well as I can adjudge of the greate damages the Southern Army has done Me the few days they were here they have taken 150 acres of Corn burned up 30,000 rails mostly Cedar Cut down and distroyed over 2500 trees that will average over two feet across the stump took 30 fatening hogs that would average 250 lbs each took two horse one the Ola filla worth $1000 in Gold, took off 5 or 6 head of Cattle the english Bull amongst 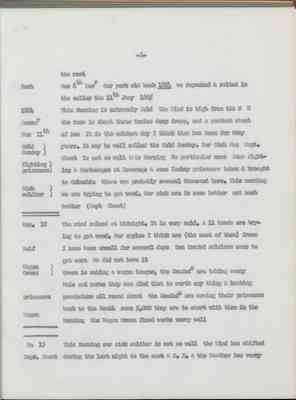 This Morning is extreamly Cold the Wind is high from the N W the snow is about three inches deep froze, and a perfect sheet of ice It is the coldest day I think that has been for Many years. It may be well called the Cold Sunday. Our Sick Man Capt. Shoat is not so well this Morning No particular news Some fighting & Scrimengon at Levernge & some Yankey prisoners taken & brought to Columbia there are probably several thousand here. This morning we are trying to get wood. Our sick man is some better not much better (Capt Shoat)

Mon. 12 Self Wagon Green prisoners Wagon The wind calmed at Midnight. It is very cold. A 11 hands are trying to get wood. Our apples I think are (the most of them) froze I have been unwell for several days Ten Confed soldiers came to get corn We did not have it Green is making a wagon tongue, the Confeds are taking every Mule and horse they can find that is worth any thing & hunting provisions all round about the Confeds are moving their prisoners back to the South some 5,000 they are to start with them in the Morning the Wagon Green fixed works verry well

Tu 13 Capt Shoat This Morning our sick soldier is not so well the Wind has shifted during the last night to the east & S.E. & the Weather has verry 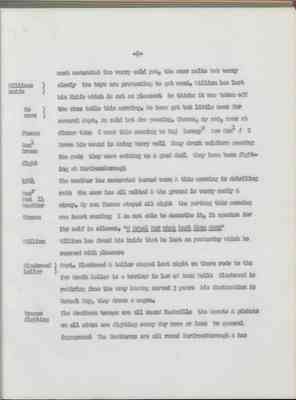 -9Williams Knife No news Thomas Genl Brown fight much moderated tho verry cold yet, the snow melts but verry slowly the boys are pretending to get wood. William has lost his Knife which is not so pleasant he thinks it was taken off the shoe table this morning. We have but little news for several days. So cold but few passing. Thomas, my son, came at dinner time I went this evening to Maj Looneys Saw Genl J C Brown his wound is doing verry well Many drunk soldiers passing the rode they were cutting up a good deal they have been fighting at Murfreesborough

1864 Decr Wed 14 Weather Thomas William Blackwood Loller Troops fighting The weather has moderated turned warm & this morning is drisiling rain the snow has all melted & the ground is verry muddy & mirey. My son Thomas stayed all night the parting this morning was heart rending I am not able to describe it, it speakes for its self in silence. "O Cruel War what hast thou done" William has found his knife that he lost on yesterday which he receved with pleasure Capt. Blackwood & Loller stayed last night on there rode to the far South Loller is a brother in law of Bank Wells Blackwood is retiring from the army having served 3 years his distinction is Moboal Bay, they drove a wagon. The Southern troops are all round Nashville the Scouts & pickets on all sides are fighting every day more or less No general ingagement The Southerns are all round Murfreesborough & has 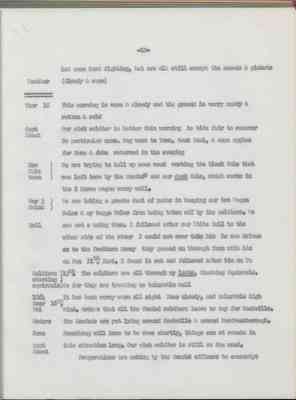 / Weather / had some hard fighting, but are all still except the scouts and pickets (Cloudy & warm)

Thur 15 / Capt Shoat / New Mule team / Our 3 Mules / Bull / Soldiers shooting squirrels This morning is warm and cloudy and the ground is verry muddy & rotten & cold Our sick soldier is better this morning he bids fair to recover No particular news. Mag went to Town, took Saul, & some apples for Emma & John returned in the evening We are trying to hall up some wood working the black Mule that was left here by the Confeds and our duck Mule, which works in the 2 horse wagon verry well. We are taking a greate deal of pains in keeping our two Wagon Mules & my bugga Mules from being taken off by the soldiers. We are not a using them. I followed after our White Bull to the other side of the river I could not over take him he was driven on to the Southern Armey they passed on through Town with him on Sun 11th. Inst. I found it out and followed after him on Tu 13th. The soldiers are all through my lotts, Shooting Squirrels. So far they are treating us tolerable well

1864 Decr 16th Fri / Orders /News / Capt Shoat It has been verry warm all night Some cloudy, and tolerable high Wind. Orders that all the Confed soldiers leave to day for Nashville. The Confeds are yet lying around Nashville & around Murfreesborough. Something will have to be done shortly, things can ot remain in this situation long. Our sick soldier is still on the mend. Preperations are making by the Confed officers to conscript 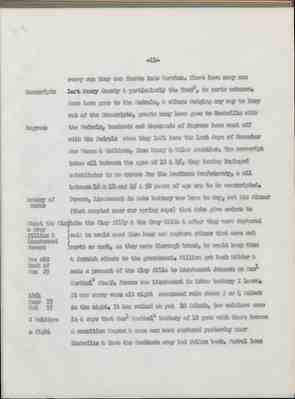 / Conscripts / Negroes / Battery of Cobbs / About the Oley & Gray fillies & Lieutenant Powers / See old Book of Sun 29 / every one thay can fource into Service. There have many men left Maury County & particularly the Towns, to parts unknown. Some have gone to the Fedrels, & others dodging any way to keep out of the Conscripts, greate many have gone to Nashville with the Fedrels, hundreds and thousands of Negroes have went off with the Fedrels when they left here the last days of November Men Women & Children, from Maury & Giles counties. The conscript takes all between the ages of 18 & 45, they having imployed substitutes is no excuse for the Southern Confederacy, & all between 16 & 18 and 45 & 50 years of age are to be conscripted. Powers, Lieutenant in Cobs battery was here to day, eat his dinner (that campted near our spring says) that Cobs give orders to take the Oley filly & the Gray Hilda & after they were captured said he would send them home and capture others that were not worth so much, as they were thorough breed, he would keep them & furnish others to the government, William got back Hilder & made a present of the Oley filla to Lieutenant Johnson on Conl Warthals Staff, Powers was Lieutenant in Cobbs battery I learn.

1864 Decr 17 Sat 17 / 2 Soldiers / a fight It was verry warm all night commenced rain about 3 or 4 Oclock in the night. It has rained on yet 10 Oclock, two soldiers came in & says that Genl Warthels battery of 12 guns with there horses & amunition Wagons & some men were captured yesterday near Nashville & that the Southern army had fallen back. Fedrel loss