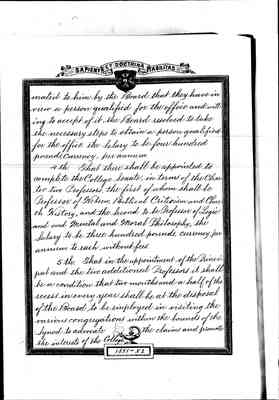 4th. That there shall be appiointed to complete the College Senate, in terms of the Charter two Professors, the first of whom shall be Professor of Hebrew, Biblical Criticism and Church History, and the Second to be Professor of Logic and and Mental and Moral Philosophy, the Salary to be three hundred pounds, currency, per annum to each without fees.

5th. That in the appointment of the Principal and the two additional Professors it shall be a condition that two months and a half of the recess in every year shall be at the disposal of the Board to be employed in visiting the various congregations within the bounds of the Synod to advocate the claims and promote the interests of the College. 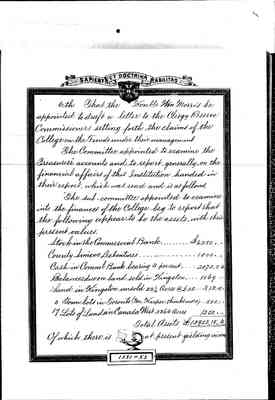 6th. That the Honble Wm. Morris be appointed to draft a letter to the Clergy Reserve Commissioners setting forth the claims of the College on the Funds under their management.

The Committee appointed to examine the Treasurer's accounts and to report, generally, on the financial affairs of this Institution handed in their report, which was read and is as follows,

"The sub-committee appointed to examine into the finances of the College beg to report that the following appear to be the assets, with their present values,

Of which there is at present yielding income 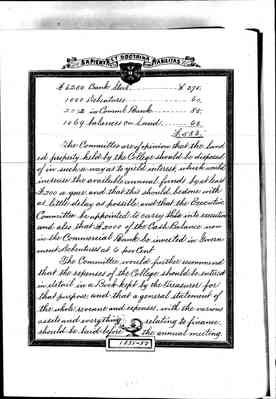 The Committee are of opinion that the landed property held by the College should be disposed of in such a way as to yield interest, which would increase the available annual funds by at least £ 200 a year, and that this should be done with as little delay as possible, and that the Executive Committee be appointed to carry thts into execution and also that £ 2000 of the Cash Balance now in the Commercial Bank be invested in Government Debentures at 6 per Cent.

The Committee would further recommend that the expenses of the College should be entered in detail in a Book kept by the Treasures for that purpose, and that a general statement of the whole revenue and expenses, with the various assets and everything relating to finance, should be laid before the annual meeting, 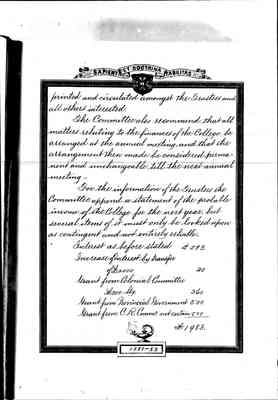 printed and circulated amongst the Trustees and all other interested.

The Committee also recommend that all matters relating to the finances of the College, be arranged at the annual meeting, and that the arrangement then made be considered permanent and unchangeable till the next annual meeting.-

For the information of the Trustees the Committee append a statement of the probable income of the College for the nest year, but several items of it must only be looked upon as contingent and not entirely reliable - 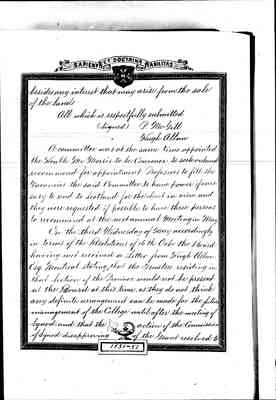 besides any interest that may arise from the sale of the lands All which is respectfully submitted (Signed). P. McGill. (Signed). Hugh Allan.

A committee was at the same time appointed the Honble Mr. Morris to be Convener to seek out and recommend for appointment Professors to fill the Vacancies the said Committee to have power if necessary to send to Scotland for the object in view, and they were requested if possible to have three persons to recommend at the next annual Meeting in May.

On the third Wednesday of May accordingly in terms of the Resolutions of 16th Oct.r the Board having met received a Letter from Hugh Allan Esq. Montreal stating, that the Trustees residing in that Section of the Province would not be present at the Board at this time, as they do not think any definite arrangement can be made for the future management of the College until after the meeting of Synod, and that the action of the Commission of Synod disapproving of the Grant resolved to